Crazy Horse, also known as tashunka witco, was a fierce Native American warrior from the Sioux tribe who on so many occasions sparred with the U.S. Army beginning around the mid-19th century.

Known for his bravery, tenacity and battle prowess, Crazy Horse proved to be a handful for not just the U.S. military, but other rival Native American tribes. His moment of acclaim among North American Indians came when he, along with Sitting Bull, defeated Lieutenant Colonel George Custer’s Seventh U.S. Cavalry battalion on June 25, 1876. Custer, along with close to 400 U.S. soldiers, died on that day.

Crazy Horse’s exploits and leadership as a full-fledged Lakota warrior are just some of the reasons why he is revered as one of the greatest warriors of American history.

Most famous for: fighting in the Battle of Little Big Horn (1876)

Crazy Horse, the Native American warrior from the Lakota Sioux tribe, was born around 1841 in South Dakota. His father and mother were members of the Oglala Sioux and Brule Sioux tribes respectively. Crazy Horse was named after his father, Crazy Horse, after he distinguished himself in a battle fighting against Arapaho warriors.

For a Native American, he uncharacteristically had a curly hair and a lighter skin complexion than his tribesmen. As a result, he was given the names Light-Haired Boy and Curly Hair as a young boy. As at the time, he hadn’t had any experience for him to earn a name.

How Crazy Horse earned his name?

As per their traditions, Native Americans earn their permanent names after they have had a particularly exceptional or memorable experience. For Crazy Horse, that experience came when he showed nerves of steel and bravely fought against Arapaho warriors. Shortly after the war, Crazy Horse inherited his father’s name. His father, Crazy Horse, then became known as Worm.

Just as Crazy Horse appeared different in his appearance (from the rest of his tribesmen) so were his behaviors and beliefs.

He was known for choosing not to hold many of his tribe’s centuries old beliefs. A case in point was in 1854 when he, in his early teens, ventured into the prairies on a quest (a Vision quest, also known as Hanbleceya) to have an out-of-body experience and be in sync with nature.

Still in his early teens at the time, Crazy Horse is said to have exposed himself to the elements while fasting for a couple of days. Once he was exhausted, and perhaps at the point of breaking, he is said to have had a vision of a man on horse. The apparition then told him to carry himself in a similar manner. The teenager was told to don not more than one hawk feather and desist from wearing a war bonnet. The man on the horse also told him to always sprinkle dust over his horse before fighting in any battle.

He also took to the habit riding into battle with a rock behind his ear and painting a lightning symbol on his face.

Up until his death in September 6, 1877, Crazy Horse followed the horseman’s instructions to the letter. He believed that those rituals not only protected him on the battle field but also imbued in him an immense warrior’s courage and power to take down his enemies.

The Sioux warrior Crazy Horse had a number of violent exchanges with U.S. General William Tecumseh Sherman, one of the most distinguished military leaders in U.S. history. From his heroics in the American Civil War supporting the efforts of General Ulysses S. Grant of himself, General William Tecumseh fought gallantly in the Union’s victory over the Confederate States. This explains why then-U.S. President Andrew Johnson placed him in charge of keeping order in Montana following the discovery of gold around the Bozeman Trail. To accomplish task of preventing rogue Native American warrior men from attacking gold prospectors, General Sherman constructed U.S. army forts in the region, including strategically placing some of those forts in Sioux territory.

Obviously, the Sioux tribesmen did not take too kindly to what they perceived as the U.S. Federal government encroaching on their lands. Crazy Horse’s tribe, Sioux, joined forces with Cheyenne warriors to wage an assault on U.S. Captain William Fettermen.

The Native American warriors devised a plan to use Crazy Horse as a decoy so that the U.S. soldiers could be led into a trap. The events that followed were a complete carnage as Native Americans butchered close to 100 American soldiers.

Following the ambush, Crazy Horse was received as a hero among Native American tribes in the region. As for General Sherman, the loss of his soldiers was more than a well-received message.

A year later, in 1867, he was again involved in a Sioux-led raid on a U.S. fort in the region. So fierce were the raids that were organized by Crazy Horse that Sherman contemplated pursuing a peace pact with the Indians.

Crazy Horse’s response when mockingly asked by a U.S. cavalry where his lands were.

The 1868 Peace Treaty between the U.S. and Native American tribes

In 1868, the U.S. army decided to remove U.S. soldiers from those forts that were built on Native American lands. Shortly after a peace treaty was struck between the U.S. government and the Native Americans. As part of the treaty, the native people were given ownership of not just the Black Hills region, but also places in Wyoming and west of Missouri. The U.S. government guaranteed to forbid any white from trespassing into those areas.

Dissatisfied with the 1868 peace pact, Crazy Horse continued carrying out attacks on Native American tribes that he believed were in cahoots with the whites.

How Crazy Horse resisted the railroads and mining expansions west

A year later, in 1873, he was part of a stealth Sioux mission that tried to steal horses that belonged to U.S. soldiers. It was during this disastrous mission that Crazy Horse first came against General George Armstrong Custer (1839-1876).

Perhaps incensed by Crazy Horse, General Custer marched his troops into the Black Hills region. The General, who was in the company of many civilian miners, was said to be prospecting for gold. The U.S. government would later place a deadline for Native Americans to evacuate the area and move to reservations.

Historians like to refer to the Battle of the Little Big Horn as Custer’s Last Stand because it was in that battle that Lieutenant Colonel George Armstrong Custer died. | Image: The Custer Fight by Charles Marion Russell.

Fought on June 25, 1876, near the Little Bighorn River in Montana Territory, the Battle of the Little Big Horn was a huge blow to the U.S. government. In addition to the deaths of many U.S. soldiers, the battle claimed the life of General Custer. The U.S. general marched into the battle to face off against Crazy Horse and the thousand or so Native American warriors of primarily Cheynne and Lakota Sioux. In the end, Sitting Bull and Crazy Horse led the Natives to victory over Custer and his vastly outnumbered army, killing the general in the process.

Lieutenant Colonel George Custer and his Seventh U.S. Cavalry battalion were defeated at the Battle of Little Big Horn on June 25, 1876. Custer, along with close to 400 U.S. soldiers, died on that day | Image: Colonel Custer, c. 1865

How and why Crazy Horse surrendered to the U.S. government?

On the back foot, Native Americans struggled to withstand the might of the U.S. government that was bent on fully exploiting resources in those regions. Amidst all that Crazy Horse remained relentless in his assault against white miners in the Black Hills region. It so happened that the Sioux also had to contend with terrible winter conditions as well as defend themselves against U.S. forces.

He started negotiations with U.S. Colonel Nelson A. Miles. The U.S. government promised to come to the aid of the Sioux who by then were at their wits’ end from the harsh winter that looked like annihilating the tribe.

For some reasons, Colonel Miles attacked Crazy Horse and the envoy that had approached Miles for peace talks. Miles’ attacks spanned throughout the winter.

In the end, Crazy Horse struck a peace deal with U.S. Lieutenant Philo Clark in exchange for relief for the Sioux. The Sioux agreed to surrender in return for a safe reservation.

Top U.S. military commanders in the region, including Lieutenant Clark, encouraged Crazy Horse to make an official visit to Washington, D.C. Perhaps suspicious of the U.S. government’s true intentions, Crazy Horse turned down the invitation. The U.S. Army in turn began to doubt Crazy Horse’s commitment to the peace negotiations.

Amidst the distrusts that existed between Crazy Horse and the top brass of the Army, Crazy Horse’s tribesmen had become worried that he was working with the white people to seize Sioux leadership. His enemies within Sioux fabricated stories about him, hoping to paint him black before the whites.

He was taken into custody by the Army. Apparently, there was an error in translation of Crazy Horse’s words, which triggered the arrest.

How did Crazy Horse die?

In September 1877, while held a prisoner by the military, Crazy Horse got into an altercation with one of the prison guards named Little Big Man. As the guard tried to put a restraint on him, Crazy Horse resisted brandishing a knife at the guards.

In the ensuing scuffle, one of the soldiers pierced Crazy Horse in the abdomen with a bayonet. His kidneys were said to have been injured in the process.

Crazy Horse eventually passed away later that night. The exact date of his death was on September 5, 1877. He was aged 35 and was survived by his wife, children and father.

His body was collected by the Sioux and laid to rest near a creek.

Not the kind to back down on things that he set his mind to, he maintained contact with Black Buffalo Woman, showering her with a lot of attention. In 1868, he was able to convince her to elope with him. After a night together, the pair had to part ways because No Water came back from his hunting trip and fought for his wife. In the ensuing conflict, No Water broke Crazy Horse’s jaw.

Luckily the two men were able to bury the hatchet. No Water presented a horse to Crazy Horse to atone for the body injury that he inflicted on his rival.

Crazy Horse’s marriage to Black Shawl was short-lived after tuberculosis claimed her life. Shortly after, he tied the knot with a French-Cheyenne woman by the name of Nellie Larrabee. 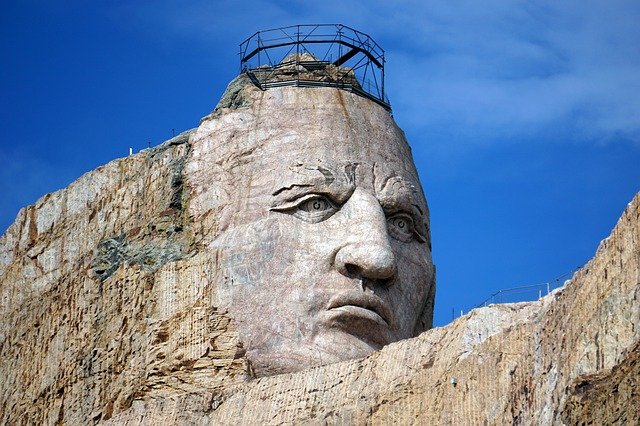 Located in the Black Hills, the same region that hosts the famous Mount Rushmore, lies the uncompleted Crazy Horse Memorial. The colossal monument, which was began in the late 1940s by sculptor Korczak Ziółkowski, is poised to be the world’s largest sculpture when completed. 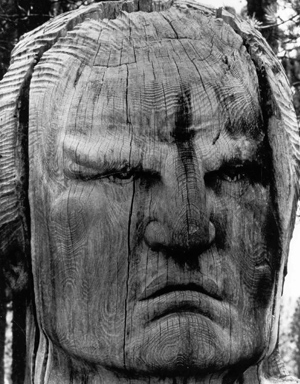 Crazy Horse had an irrational fear of being photographed as he believed that the camera shortened his lifespan.