After the American Revolution, Americans (primarily those in the North) went into a period of self-reflection. Here was a nation whose central tenet professed that all men were created equal with inalienable rights. Therefore, how could it rationalize the continuation of slavery long after the British had been deposed from power? Below, we explain everything that you need to know about the Missouri Compromise that was signed into law on March 6, 1820, by President James Monroe. Special attention is paid to before, during and after events of the Missouri Compromise. 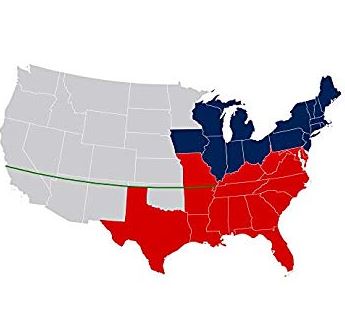 The Missouri Compromise of 1820 was an arrangement that was struck by U.S. lawmakers from the largely antislavery North and the pro-slavery South. The Compromise of 1820 was designed to bring some level of calmness over the deeply divisive issue of slavery in America. Passed by the U.S. Congress on March 03, 1820, the Missouri Compromise allowed Missouri to come into the Union as a slave state while Maine (an area that was part of Massachusetts) got admitted as a free state.

Additionally, the Missouri Compromise outlawed slavery in all areas (in the Louisiana Purchase) north of 36° 30´ latitude line. By so doing, politicians were able to avert a crisis between the North and South. At least that is what they thought at that time. Little did those politicians know that, about three decades later, the issue of slavery would again rare its ugly head and plunge the entire country into a full-blown civil war – the American Civil War.

February 4, 1793 – The Fugitive Slave Act comes to being. The act allowed slave owners to retrieve a runaway slave because the slave was considered a property or chattel. Proponents of the act argued that the right to one’s property is well protected by the U.S. Constitution – the 5th Amendment.

March 22, 1794 – Congress passes the Slave Trade Act of 1794. The Act bans the importation of slaves into America. To the abolitionist, this was a huge leap in their efforts. It became illegal for any American to engage in or finance the trade of slaves. However, the act was not far-reaching in the sense that foreigners could still import slaves into America.

On May 10, 1800, the Slave Trade Act of 1800 added a bit of restriction to slavery in America. The act forbade Americans from offering their services to foreign ships engaged in the slave trade.

July 4, 1803 – The Louisiana Purchase deal goes through. America’s dream of westward expansion becomes a reality under the presidency of Thomas Jefferson. America purchased the Louisiana Territory from France. However, these new territories would come back to bite the country a few decades later. The question on everyone’s mind at that time was: would those territories be slave states or free states?

March 2, 1807 – the Slave Trade Prohibition Act of 1807 gets passed. The act effectively ends the importation of slaves into the continent, be it an American or foreign importer. This still did not result in the full emancipation of slaves in America. The act simply stopped slaves from entering the country.

February 2, 1818 – Beginning in 1817, residents of the carved out territory from the Louisiana Territory – Missouri Territory – voiced their desires to be admitted into the Union. They signed petitions and sent it to Congress on February 2, 1818, by John Scott (Missouri’s Representative in Congress). Bear in mind, Missouri wanted to come into the Union as a full-fledged slaveholding state.

February 13, 1819 – Representative James Tallmadge Jr. introduces two amendments to the bill that insisted on restricting slavery in Missouri in order to join the union. The first Amendment proposed that Missouri only be admitted into the Union as a free state. The second Tallmadge Amendment called on the emancipation of all slaves (born in Missouri) upon turning 25. The estimated number of those categories of slaves was in the region of 20,000.

Unfortunately, Tallmadge’s amendment did not get passed in the Senate. It was however successful in the House of Representatives.

December 14, 1819 – Alabama becomes the 22nd state to get admitted into the Union. As a result of Alabama’s admission, the number of slave states and free states becomes equal, that is 11 states apiece.

By this time, Missouri’s request to join the Union was still put on hold due to the controversy and tension surrounding Tallmadge’s Amendments.

December 1819 – Maine applies to join the Union. To the delight of Northern politicians, Maine intended entering as a free state. However, the South made it explicitly clear that Maine could not be admitted if Congress did not allow Missouri join as a slave-holding state.

December 1819 – Henry Clay, Speaker of the House, brokers a deal that allows both Maine and Missouri to be admitted. The former would be a slaveholding state and the latter a free state.

1820 – Henry Clay merged the two bills together and sought to gain support in both legislative houses so that they could be passed as one. After a lot of dialog between the North and the South, Henry Clay helps broker a compromise – the Missouri Compromise of 1820.

Before the bill was passed by Congress, Senator Jesse B. Thomas of Illinois inserted a major amendment that stated that with the exception of Missouri, all the remaining lands north of 36° 30′ parallel from the Louisiana Purchase would not allow slavery.

The bill gets passed in both houses – the House of Representatives on February 26, and the Senate on March 2. And for his tireless work in keeping relative peace between the North and the South, Henry Clay would be famously called the “Great Compromiser”.

1832 – President Andrew Jackson threatens South Carolina with a military intervention should the state defy the economic policies of the federal government. The issue raises a whole lot of questions about states’ rights versus federal powers. Northern politicians began swinging in favor of federal powers while Southerners held on to the ideology that states should be given complete control over their destinies. This issue further brings a wedge between the North and the South. It sets the stage for what would come as the American Civil War.

1845 – The U.S. annexes Texas. The deal is the handwork of President John Tyler. This sours the relationship between Mexico and the United States. Mexico never recognized the annexation.

1846 to 1848 – James K. Polk gets elected as the 11th President of the United States. Like his predecessor, Polk eyes western expansion and is driven by the manifest destiny. A year into Polk’s presidency, the Mexican-American War erupts in 1846. Mexico and America are unable to resolve their border disputes and the tensions escalate into a bloody war between the two countries. In 1848, America comes out victorious. Under the Treaty of Guadalupe Hidalgo (1848), the U.S. wins for herself new territories in the northern Atla California and Santa Fe de Nuevo Mexico. Mexico accepts the Rio Grande as the border with the U.S. The Mexicans also acknowledge Texas to be part of the United States.

January 29, 1850 – A Kentucky Senator Henry Clay introduces the Compromise of 1850. Clay had ambitions of revolutionizing America’s railway network. He planned to link the western territories to the other parts of the country. In order to realize this dream of his, he needed to calm the tension that was brewing between the North and South. It all stemmed from the issue of slavery. Americans were still trying to grapple with the question of: what status should those new territories take – slave state or free state?

May 30, 1854 – Congress passes the Kansas-Nebraska Act of 1854. The somewhat fragile compromise, which had existed for over three decades, between the North and the South was shattered with the passage of the Kansas-Nebraska Act. The act repealed the Missouri Compromise. It allowed for all incoming new states to the Union to decide whether or not they wished to be a slaveholding state or a free state. The states now had what historians call, Popular Sovereignty.

The Kansas-Nebraska act infuriated politicians in the North. And across Kansas, several clashes erupted between pro-slavery activists and antislavery activists. From 1854 to 1860, there was immense conflict in the state, claiming about 200 hundred lives in the process.

March 1857 – Dred Scott loses a Supreme Court case  (Dred Scott v. Sandford 1857). In a 7 to 2 judgment, the Supreme Court declared that Dred Scott was no citizen of the United States, and hence he had no right to sue for his freedom. Politicians down South see this as a momentous win. Up North, politicians go completely livid. The Supreme Court’s verdict and the Popular Sovereignty principle adds more fuel to burning flame in the country.

October 1859 – The scourge of pro-slavery activists, John Brown terrorizes Kansas for a couple of years. John Brown – a radical antislavery activist –  goes on a bloody rampage during the Harpers Ferry Raid in October 1859. The authorities apprehend him and his gang. John Brown gets executed that same year. In spite of his extremely violent ways of activism, John Brown’s death is not well received in the North.

Southern States secede from the Union

March 1861 – To the absolute dismay of the South, the vibrant and well-learned Kentucky politician, Abraham Lincoln, gets sworn in as the 16th President of the United States. As at the time of Lincoln’s inauguration, a total of seven Southern states ( South Carolina, Florida, Mississippi, Alabama, Georgia, Louisiana, and Texas) had seceded (in late 1860) from the Union by issuing ordinances of secession.

April 12, 1861 – The American Civil War breaks out. America’s Great Compromiser, Henry Clay, had long left the scene. There was not going to be a third compromise. Union soldiers (predominantly in the North) and Confederate soldiers (predominantly in the South) were pitted against each other. The conflict had devolved into something more than slavery. There were the issues of states’ rights and economic freedom thrown into the fray. The two sides battled for close to 4 years. In the end, the Union came out victorious.