Situated close to 5th Avenue in New York City, Washington Square Park is a popular public ground with an area of about 9.8 acres (39500 square meters). This iconic park serves as a multipurpose open center, hosting diverse social gatherings, ranging from cultural activities to tourist-friendly areas. Named after the first President of the United States of America, George Washington, the park can boast of drawing in millions of visitors annually.

Washington Square Park has been in existence since 1871; that is, about one-and-half century ago. Longevity has enriched the park with interesting historical backgrounds as it evolved through the different phases of its life.

Back in the 17th century, the Minetta Creek (a natural water channel) ran through the park area and divided the land. During the second half of the 17th century, Washington Square Park used to be a Dutch farmland close to an indigenous American community known as Sapokanican.

The Dutch later distributed the land to the colonized Angolan people, using the land as a neutral ground to protect the settlers from Native American hostilities. In 1643, some partially-freed slaves, including Catalina Anthony, Domingo Anthony, and Manuel Trumpeter, were apportioned some areas of the land. They mainly used it for farming activities.

Even though the farmers themselves were free from slavery, their children were born into slavery. Additionally, the farmers were required to pay land dues to the Dutch from the proceeds of their farm produce. As a result of slavery, the area witnessed an emergence of a black majority in that portion of New York. Consequently, the area became known as the Land of Blacks. In other words, it was called Little Africa.

The area was largely used as farmland until the year 1797. In April that year, the New York Common Council bought the land and converted it into a burial ground for deceased indigenes and strangers.

In 1826, the western area of the Minetta Creek was sold out to New York City. The land was then prepared and converted to the Washington Military Parade Ground. This was where militiamen were trained for national defense. The neighboring cities of the parade ground became a highly sought-after residential site during the 1830s.

From 1849-50, the area was redeveloped to form a park. It was the first park of its kind in that locality. More walkways were created; a fence was then constructed around the park.

Finally, in 1871, the area came under the operation of the New York City Department of Parks. This new body redesigned Washington Park to have a curving shape, instead of straight paths.

After the Revolutionary Wars, New York City authorities acquired portions of the land in 1797 and used it as a potter’s field (a burial site for unidentified people, indigenes, dead prostitutes, poor people, etc.).

In the 19th century when New York City was struck by a deadly epidemic of yellow fever, the majority of the epidemic victims were transported and buried at this cemetery ground. Since the park was on the outskirts of town, the dead bodies were conveyed there because of hygienic reasons.

Some churches also buried their deceased members at this field when their cemeteries ran out of land spaces. Right at the center of the park, around the area occupied by the current fountain, some guilty criminals were sent to their deaths. After their execution, they were laid to rest below those grounds. A portion in the Park’s northwest is today called Hangman’s Elm.

In 1827, New York City mayor Phillip Hone, authorized drill works to be carried out at the park. The city officials needed to expand the field borders to reach about 14 acres. But since the ground wasn’t leveled, the machines used at the site occasionally excavated funeral caskets and human skeletal parts such as skulls.

The exhumed bodies at the shallower depths were taken to different burial grounds and reburied over there. Aesthetic grasses were then planted at the site.

Today, the redeveloped area means much more than a former cemetery. Here are some amazing facts about Washington Square Park: 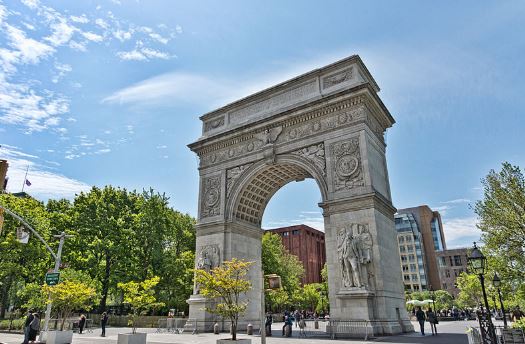 Standing at the northern entrance of the park, the arch is the artistic brainchild of Stanford White. It was erected between 1890 and 1892 to mark the 100th anniversary of the inaugural ceremony of George Washington in 1789. Measuring 77 ft (23 m) in height, the arch is one of the iconic features of the park.

By 1838, the famed Samuel Morse (a name that was given to the Morse Code) – inventor of the telegraph – was ready to do a test transmission of a telegraph message. He stood at 22 Washington Square and transmitted a telegram through copper wire he had run from his window to the Park. The successful transmission opened a new era of telecommunication.

The Park has a Green Environment

A key captivating landmark of the park is exemplified by the greenery that surrounds Washington Square Park. Green grasses, plants, and trees are all over the facility. The park exudes state-of-the-art eco-friendly such as solar panels and geothermal systems.

The Park is Periodically Renovated

As time goes on, redevelopment projects are done to give the park a new look. The cost of these renovation works sometimes enter into tens of millions of dollars. New lawns, lighting systems, benches, playgrounds, and stage have been added to the park’s magnificence.

There is a Fountain at the Central Area of the Park

The fountain is also one of the attractive features of the park, attracting hundreds of thousands of tourists annually. With jets of water shooting up high to the skies, kids stare in amazement when they are taken to this park during family summer vacations. The fountain was moved to align itself with the arch, resulting in picturesque aerial views.