Regarded as one of the most important playwrights of all time, Aeschylus (born c. 525 BC; died 456 BC) is famed for lifting the tragedy genre to heights never seen before with beautifully written masterpieces like Seven Against Thebes (c. 467 BCE), Prometheus Bound (c. 430 BCE), The Persians (472 BCE), and Agamemnon (458 BCE). For this, this Greek playwright is popularly referred to as the “Father of Tragedy”.

Aeschylus’ plays allowed for the main actor to interact with secondary actors, thereby creating the foundation of subsequent dramatic works. Prior to Aeschylus, there wasn’t conflict among the characters as they only communicated with the chorus. Considered one of the three great tragedians of ancient Greece, Aeschylus had had tremendous influence on playwrights that came after him. The other two great tragedians were Sophocles and Euripides.

Speaking of tragedy, Aeschylus’ death was described by 1st-century Latin writer and author Valerius Maximus as a very tragic one. According to Valerius, who lived during the reign of Roman Emperor Tiberius (14 AD – 37 AD), Aeschylus was outside one fine afternoon, basking in the sunlight, when an eagle dropped turtle from above right on top of his head. The playwright is believed to have died on the spot. Valerius goes on to say that the eagle probably mistook Aeschylus’ bald head for a rock. Eagles are known for feeding on turtles by dropping them from sky in order to shatter the shell. 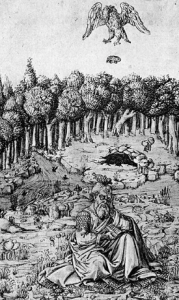 According to Pliny the Elder (also known as Gaius Plinius Secundus), the 1st-century AD Roman philosopher and author, Aeschylus had taken to spending his later years in the outdoors because the Greek poet was trying to avoid the prophecy that stated he would meet his end by a falling object indoors.

Some modern scholars and historians regard Valerius’ account of Aeschylus’s death as complete hogwash devised to match a tragic ending to the life of a famous tragic writer. To this day, the story of Aeschylus being killed by a turtle has not been corroborated.