The myth of Otrera, the first Queen of the Amazons in Greek mythology

Ancient Greek writers and poets depicted the Amazons as a group of powerful female warriors and master hunters whose fighting prowess and courage were equal, if not greater, than men. It therefore comes as no surprise that their first queen, Otrera, was associated with Ares, the Greek god of war.

Otrera – Queen and the founding mother of the Amazon nation, a group of female warriors and hunters.

According to the myths, Queen Otrera was born to Ares, the Greek god of war, and the nymph Harmonia. Otrera is said to be the mother of famous Amazon warriors such as Hippolyta, Antiope, Melanippe and Penthesilea.

The children of Queen Otrera

Otrera’s oldest daughter, Hippolyta, is famous for owning a magical war belt or girdle known as the Girdle of Hippolyta. According to the myths, the girdle was given to her by her father Ares. Hippolyta appears in a number of stories which see her path cross with Greek heroes like Theseus and Heracles. In the ninth labor of Heracles, King Eurystheus of Tiryns sends the Greek demigod Heracles to fetch Hippolyta’s girdle for Admete, the daughter of Eurystheus. Hippolyta, astonished by Heracles’ bravery, simply handed the girdle to the Greek hero, no fuss whatsoever.

Did you know: Hippolyta’s name translates to either “let loose” or “horse” in ancient Greek?

Penthesilea is infamous in Greek mythology for accidentally killing her sister Hippolyte in a hunting expedition. Penthesilea then tries to atone for it by rendering her services to the Trojans during the Trojan War, where she was slayed by the mighty Achilles. In one version of the story, Achilles falls madly in love with Penthesilea just before she died.

Antiope is the Amazon warrior woman who succeeded Queen Otrera. In the myths she is described as the daughter of the god of war Ares and sister to Hippolyta, Penthesilea, and Melanippe. She co-ruled with her sister Orithyia after the death of Otrera. Like her sisters, Antiope was brave and had a very outstanding fighting prowess. Under her leadership, she was able to lift the Amazons to heights never seen before. In some accounts of the myth, she was abducted by Greek hero Theseus during skirmishes between the Amazons and Heracles. By Antiope, Theseus possibly fathered a son called Hippolytus. During a raid by the Amazon women warriors to free Antiope, an Amazon warrior by name Molpadia accidentally shot and killed Antiope. Theseus later killed Molpadia.

In Heracles’ ninth labor, the Greek demigod is said to have captured Amazonian Melanippe, the sister of Queen Hippolyta. Heracles intention was to ransom Melanippe for the prized Hippolyta girdle. The Amazonians complied with Heracles’ demand and Heracles released Melanippe once he took receipt of the girdle. In one account, Melanippe was the Amazonian woman Theseus kidnapped and later married, not Antiope.

In a different version of the story, Otrera is the consort of Ares, and by Ares, she bore those children.

The Temple of Artemis

As stated in the introduction, the Amazons were famous for their outstanding hunting and horse riding prowess. It therefore comes as no surprise that their empire was associated with Artemis, the Greek goddess of the hunt and the moon. And like Artemis, Amazon warrior Alcippe is believed to have taken a vow of chastity. 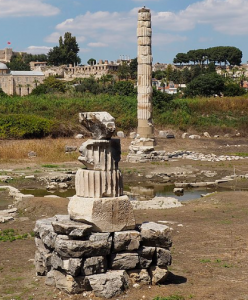 Site of the Temple of Artemis in the town of Selçuk, near Ephesus (present-day Turkey)

Amazon Queen Otrera is famed in the myths as the founder of the Temple of Artemis in Ephesus (present-day Selçuk in İzmir Province, Turkey). Regarded as one of the Seven Wonders of the ancient world, the Temple of Artemis was at one point in time the largest building in the world, according to 2nd century AD Greek traveler and geographer Pausanias.

According to ancient Greek lyric poet Pindar, the stone Temple of Artemis was established as a sanctuary during the Amazons’ war against Theseus and his Athenian army. 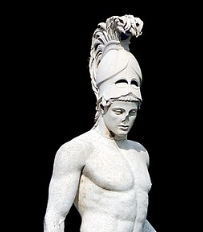 Ares, Greek god of war and a member of the 12 Olympians, was the son of Zeus and Hera. Ares fathered many children, including the Amazon warrior women

Otrera and her Amazon Nation were believed to have very strong admiration for Artemis and Ares. In the myth, it is said that Ares was so impressed with Otrera and her Amazon warriors that he came down to earth to commend her. He asked her to build a temple in his honor, which Otrera dutifully complied with. The Amazons then took to worshiping and sacrificing animals in Ares’ honor in exchange for the god’s blessings.

In Greek mythology, the Amazon Nation are depicted as fierce warrior women who possessed outstanding fighting abilities and were sometimes known for their brutality. It was also forbidden for men to make it into their kingdom. They only raised the female children they bore – the sons that they gave birth to were either killed or sent to live with their fathers.