The myth of Hugin and Munin, the two ravens that perch on the shoulders of Odin

In Norse mythology, Hugin and Munin refer to the two ravens that perch on the shoulders of the all-father god Odin. Acting as reliable and loyal companions of Odin, those two birds played a vital role in the affairs of Odin and other Norse gods. Odin’s ravens – Hugin and Munin – flew over the world every day and reported everything that they saw and heard to Odin. The ravens had several abilities, including aerial abilities and ability to understand and speak a host of languages. They were the perfect spies for Odin and his fellow Norse gods.

Wonder where those two raves came from, and how they are often represented in Norse mythology?

Continue reading to discover the origin story, powers, meaning, significance and depiction of Hugin and Munin Pan in Norse mythology.

Significance of Hugin and Munin in Norse mythology

A plate from a Vendel era helmet featuring a figure riding a horse, holding a spear and shield, and confronted by a serpent. The rider is accompanied by two birds.

We begin by exploring the importance of Hugin and Munin in Norse mythology. Similar to the world we have today that thrives on information and knowledge, the Norse world also valued knowledge. Time and time again, we see many characters in the pantheon going to great lengths to enhance their wisdom and knowledge. The gods in Norse mythology have this constant fear of the events of a bleak future, a future where many of the gods are doomed to perish. Therefore, boosting one’s stockpile of knowledge seemed like a reasonably logical thing to do in order to avert the impeding doom (i.e. Ragnarok). Take the examples of Odin and Heimdallr – two gods who sacrificed a part of their bodies to drink from Mimir’s well of wisdom.

Therefore, having creatures like Hugin and Munin came in very handy, as Odin would send those birds out every day to gather information across the Nine Realms. In some regard, Hugin and Munin more or less acted like spies for the all father god. These ravens would report to Odin whatever they saw and heard in those realms. Odin would then use the information received to develop war strategies against creatures and beasts that sought out to do serious harm on Asgard, the home of the Norse gods.

Read More: How Odin lost one of his eyes in the pursuit of knowledge

In Norse mythology, Odin is described as a god who is close to being all-knowing and all-seeing. However, he was never content with the vast knowledge he had. He was always eager to peer into deepest regions of the cosmos and get to know things taking place in worlds beyond his. This is where Hugin and Munin’s daily flights come in. The ravens were important sources of up-to-date and real time information. Since Odin had such a close bond with those ravens, it is not unfathomable to think that Odin, seated in his throne room in Valhalla, Asgard, could see and hear in real time the things that the birds saw and heard as they flew over the world. This point reinforces Odin’s key feature of being an all-seeing god, as some accounts describe him.

It must be noted that Munin and Hugin were not just agents or spies of Odin, but they were part of his circle of trusted companions. In most accounts, the ravens are said to perch on both sides of Odin’s shoulders. What it means is that wherever Odin went the ravens followed him. Their aerial ability was immensely useful. They could spot things miles away and relay that information to Odin. With the ability to identify danger, Hugin and Munin might have saved Odin’s life countless number of times.

Hugin and Munin – the two ravens that are considered Odin’s most trusted animal companions. They were basically seen as Odin’s helping spirits

Joining Hugin and Munin in Odin’s circle of trusted companions are two vicious wolves – Geri and Freki – who stood always by Odin’s side. There is also the eight-legged powerful stead known as Sleipnir, whose powers and abilities were unmatched by any horse in the Nine Realms.

Hugin and Munin’s daily flights around the worlds

It’s said that Odin would wake before the day even broke and he would whisper a set of instructions into the ears of Hugin and Munin. After that he would release them into the world. The trusted companions of Odin, who by the way have tremendous speed and aerial ability, would go into the world and begin their mission of gathering information. They could process gazillion things at neck breaking speeds as well. To carry out their daily tasks, the ravens must have had very good memory power as well as brilliant eyesight. Upon completion of their daily rounds, so to speak, Hugin and Munin would fly back to Odin in Asgard. The birds would then transfer all that they heard and saw in Midgard (i.e. the world) to their master Odin. 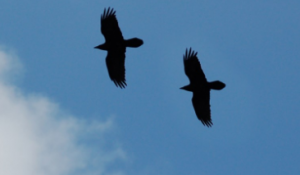 Huginn (thought) and Muninn (memory/mind) are represented as very intelligent and curious birds in Norse mythology. It was believed that Odin’s ravens flew out every morning into the world and brought back news about the world. They were considered the embodiment of Odin’s cognitive and magical sides. The ravens helped Odin enhance his mastery of magic.

As symbols and representations of Odin

It’s is commonly known that Odin’s symbols are often the wolves and ravens. Whenever Germanic tribes saw a flock of ravens hovering in the sky, they believed that Odin was in the vicinity. Some mythographers have stated that the ravens go beyond being symbols of Odin. They are also the physical embodiment of Odin. Bear in mind, Odin is praised in the myths as the greatest shaman in the Norse world. Often times, Odin would place a part of himself, if not all of himself, in those trusted companions of him. And like Odin, the ravens could understand a plethora of languages. This feature of theirs was extremely useful when gathering information in foreign lands and strange realms.

The above supports accounts that represent Hugin and Munin as one with Odin’s own mind. Odin could go into a deep trance and transfer his consciousness into the birds, allowing him to see and hear everything that the birds come into contact with.

Meaning of Hugin and Munin

The commonly accepted meaning of Odin’s ravens Hugin and Munin are “thought” and “mind” (or memory) respectively. The birds represented the cognitive side of Odin. This explains why Odin could transfer his consciousness into the ravens whenever he went into a deep spiritual trance. This ability was believed to be common practice by shamans in Nordic cultures.

In one version of the myth, Odin is said to have been temporarily consumed by the fear of losing his ravens. Odin feared that one of the ravens would not make it back to him. Like many ancient myths, Norse myths and stories sometimes depicted the gods with human feelings and fears. This explains they are prone to fighting and doing things that ordinary mortals do on a daily basis.

A different interpretation could be that when Odin says he worries for Hugin (memory), he is referring to inevitable process of aging. In other words, Odin is worried of losing his memory due to old age.

In the myths, Odin is said to get worried that his ravens could get injured, which would impact on him as well, as the birds and Odin were one single entity. Quote: From the poem Grímnismál in the Poetic Edda – a collection of poems which make up one of the most important sources of Norse mythology and literature

Ravens and their attraction to battlefields

Noticing how ravens constantly drew close to battlefields, ancient Nordic tribes interpreted this to mean the presence of Odin. After all, Odin was a war deity who felt honored, and perhaps pleased, whenever blood was shed on the battlefield. It was also believed that Odin sent out his maiden warriors, the Valkyries, to scour the battlefield and select the bravest of fallen warriors. It wouldn’t be unthinkable that Odin’s ravens lent a helping hand to the Valkyries during their mission.

There have been some authors and mythographers who even claim Hugin and Munin were originally associated with war and battle before they began to take on the role that we now know them for.

It was believed that whenever a raven flies by before a sacrifice Odin was content with the sacrifice and prayer.

Those who were slain in battle were seen as gifts to ravens. And due to the close bond between ravens and Odins, a gift to ravens meant a gift to Odin himself. As a result, ravens were strongly associated with death, almost similar in the same way Odin was associated with death. After all, Odin presided over Valhalla, a mighty hall where all the brave warriors that died in battle go to. 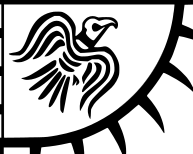 Raven banner was carried by some Scandinavian clans as a way to call upon the support of Odin.

Another point that reinforces association between ravens and wars could be seen in the raven banner that some Scandinavian tribes used when going to war. Clans that used the ravens as their war banner believed that it imbued in their warriors the fighting spirit of Odin. They also believed that it could cause the enemy to be consumed by fear.

In Icelandic poet Snorri Sturluson’s 13th century Prose Edda, Odin is called hrafnaguð – meaning “the Raven-God” in Old Norse. This name, which is one of the many names of Odin, is in reference to the two ravens that always accompany Odin. The chief of the Norse pantheon went by many names, including Aldafaðr (Father of Men), Alfǫðr (Allfather), Bági ulfs (Enemy of the Wolf), Fjǫlnir (Wise One), and Hjaldrgoð (God of battle), among others.

More on Hugin and Munin 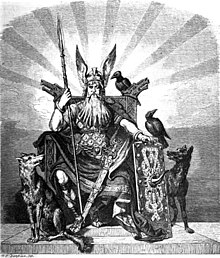 In addition to the ravens Hugin and Munin, Odin, the chief god of the Norse pantheon, had a number of loyal animal companions, including the wolves Geri and Freki, and the eight-legged stallion Sleipnir. Image: Odin enthroned and holding his spear Gungnir, flanked by his ravens Huginn and Muninn and wolves Geri and Freki (1882) by Carl Emil Doepler