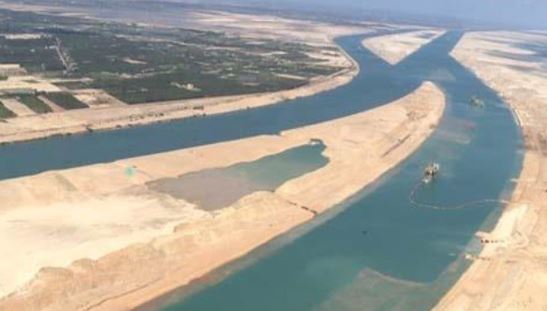 As a result of its sheer importance in international trade, the canal has over the years attracted a significant amount of interest from world powers. In the mid-1950s, Egypt’s seizure of the Canal, which prompted a military intervention from the West, almost nudged the the region and the world as whole into an all out war.

The article below contains everything that you need to know about the Suez Canal.

Location of the Suez Canal

Why was the Suez Canal built?

First and foremost, construction of the Suez Canal took about a decade to complete. Upon its opening on November 17, 1869, it was hoped that the Canal would be open to all countries, irrespective of whether for military or commercial purposes.

The builders of the Canal aimed to use it to link the Red Sea and the Mediterranean Sea. It must be noted that as far back as 2000 B.C.E. small canals did exist to connect the Nile River to the Red Sea. In the centuries that followed, plans of connecting the Red Sea to the Mediterranean were often abandoned because of fears that differences in altitude of the two seas would prove to be a huge stumbling block. In the meantime, the people in the region and traders had to make do with land mode of transportation, i.e. horses and trains.

How was the Suez Canal built?

The first concrete plans to build a route between the Red Sea and the Mediterranean started around the 1830s. The conversation was initiated by the famous French engineer and explorer Linant de Bellefonds.

Before construction started, Bellefonds, who was by the way an expert in Egyptian affairs, explored the Isthmus of Suez. Bellefonds made a shocking discovery – he discovered that both sea bodies (the Red Sea and the Mediterranean Sea) have the same altitude. As such, the builders wouldn’t have to use locks, and neither would the construction of the canal be as significantly difficult as earlier thought.

Following Bellefonds’ discovery, the Ottoman ruler of Egypt and the Sudan Khedive Said contracted French diplomat Ferdinand de Lesseps to establish a company that would construct the Suez Canal. In the 1850s, the company, which came to be called the Suez Canal Company, received a 99-year lease to operate the Suez Canal.

Ferdinand de Lesseps began work by starting up a commission known as the International Commission for the Piercing of the Isthmus of Suez (Commission Internationale pour le percement de l’isthme des Suez). Lesseps brought on board different experts from seven countries. Most influential of those experts was the civil engineer Alois Negrelli, who relied on the findings of Bellefonds in the decades prior. As lead of the project, Negrelli was part of the team that developed the blueprint for the Suez Canal.  By 1856, the commission had submitted its final report, paving the way for the Suez Canal Company to be established.

When did construction of the Suez Canal begin?

It took the construction team, which was comprised of workers of about 1.5 million people, about 10 years to excavate the area. Construction of the mega project was reminiscent to how the magnificent pyramids of Egypt were built.

There were also claims that a significant number of the construction workers were slave laborers. In the 10 years that construction took place, it was estimated that several thousands of workers died in the process, many from water-borne diseases and cholera.

Funding for the construction of the Suez Canal came predominantly from American, French and British investors. The latter two countries were also the very countries that governed Egypt at the time.

Aside from the deaths that were recorded on the site, construction was also stifled partly due to the local’s rebellion against colonial rule of Britain and France in the region. Technological challenges at some point proved a slight hurdle for the project managers to surpass.

All of those challenges caused the cost involved in the construction of the Suez Canal to shoot up tremendously. It was estimated that cost more than doubled to $100 million.

When did the Suez Canal open?

At an occasion that was graced by the Khedive of Egypt Ismail Pasha, the Suez Canal was formally opened on November 17, 1869.

In the first few years and decades of operation, the canal was mostly frequented by steamships. Sailing vessels had still yet to master the somewhat turbulent winds that could rare its head periodically. Also in this period, the canal received significantly less traffic than expected by the investors. As a result of the poor forecasted financial outlook, the Ottoman Empire sold off its share in the Suez Canal to the British in 1875.

However, in the decades that followed, traffic picked up, making the canal a very important trading route in international trade and maritime. Some historians have stated that the canal proved very vital in Europe’s colonization of African continent. France, the European powerhouse France that was the majority shareholder of the Suez Canal, benefited enormously from waterway for several decades.

Control and protection of the Suez Canal

Toward the latter part of the 19th century, a convention held in the Ottoman capital Constantinople decided the Suez Canal should be operated as neutral zone for the benefit to the whole world. It was also decreed that since Britain’s influence in the region was enormous, the canal should be placed under the protection of Great Britain. This role of Britain was again affirmed in 1936, when the Anglo-Egyptian Treaty of 1936 was signed.

During World War I, Great Britain carried out its duty of protecting the canal from an attack marshalled by the Ottoman Empire.  Realizing how vital and strategically important to securing an advantage in WWII, the Axis forces tried to seize it from Great Britain. The Allies strongly defended it and banned all ships belonging to the Axis powers.

Following the end of World War II, and as more and more British colonies in the region began to gain independence, Egypt tried to wrestle control of the canal from the British. In 1951, the Egyptians withdrew from the 1936 Anglo-Egyptian Treaty.

Throughout the 1950s, tensions flared up between Egypt, who had allied itself with the USSR, and the West.  In 1956, the Britain removed its forces from the canal and gave control to Egypt, which was then led by President Gamal Abdel Nasser.

As part of the tensed political and military atmosphere emanating from the Cold War, President Nasser sought to appease nationalist elements in Egypt by nationalizing the Suez Canal in 1956. Egypt’s nationalization of the canal was its way of throwing its support to the USSR.

Following the nationalization of the canal, the West, particularly America, withdrew most of its funding for the Aswan Dam over the Nile.  Nasser responded to West by closing off the Straits of Tiran, depriving Israeli ships access to the Red Sea.

In October 1956, a combined military intervention from France, Britain and Israel was set up to invade Egypt if the Suez Canal was not returned to the previous status. The three nations restricted their actions to military targets and airfields; they even warned the civilian populations before the operations. The region’s inhabitants braced themselves for further escalations, as fears of a breakout of World War III seemed inevitable.

Amidst all of that U.S. President Dwight D. Eisenhower delivered a speech to a joint session of Congress on January 5, 1957. The proposal (i.e. the Eisenhower Doctrine), which came on the back of developing situation in the Middle East, was the president’s way of reshaping the US Middle East policy in order to halt the spread of communism.

Tensions were calmed down kind courtesy to Lester B. Pearson’s (then Canadian Secretary of State for External Affairs) hard fought efforts at the United Nations (UN). Pearson’s recommendation to the UN that the canal be opened to all countries was accepted; and so, the UN sent peacekeeping force to the area.

The Suez Canal during the Arab-Israeli War

When the Six-Day War broke out between Israel and the Arabs in 1967, President Nasser again sought to block access to the canal. He asked the U.N. peacekeeping forces to leave the Sinai Peninsula. In spite of Israel’s military efforts, Nasser was still able to put a blockade on the canal. It was not until the U.S. and Great Britain intervened before the canal got reopened to maritime access. Nasser’s successor President Anwar Sadat brought ultimately gave Egypt’s commitment to keep the canal opened to all nations.

Interesting Facts about the Suez Canal