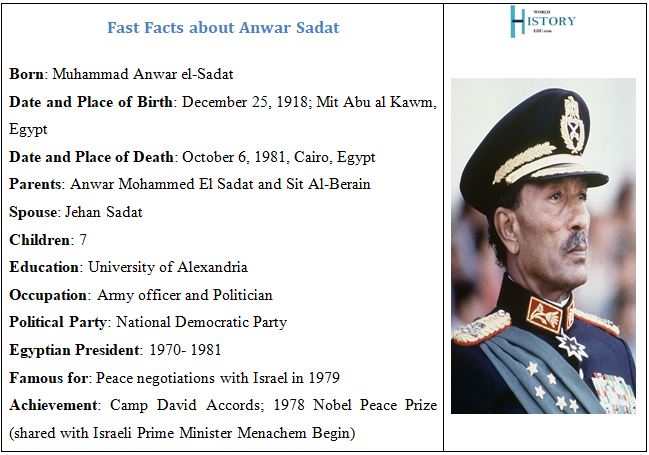 Anwar Sadat was the third president of Egypt from 1970 until his horrific assassination in 1981. He was a relatively pro-West leader. In the latter stages of his presidency, Sadat extended a warm hand to Israel, signing the Camp David Accords and the Egypt-Israel Peace Treaty. For his bold move towards restoring peaceful relations between the Egypt and Israel, he jointly received the 1978 Nobel Peace Prize with Israeli Prime Minister Menachem Begin.

The following covers the biography, presidency and assassination of Anwar Sadat, the first Muslim Nobel Laureate.

Born on 25 December 1918 to a very poor family in the Nubian region, Anwar Sadat grew up in Monufia, Egypt. In addition to this, he had a total of 13 siblings.

At the age of 20, Anwar Sadat had successfully graduated from the Royal Military Academy in Cairo. While stationed in Sudan, Sadat made the acquaintance of Gamal Abdel Nasser, future president of Egypt. The two military men would develop a strong affinity for each other. They, along with a group of junior officers, went on to set up the Free Officers – an organization’s whose primary goal was to get rid of every British influence in the country. They particularly hated the monarchical and corrupt rule of the King Farouk – King of Egypt and the Sudan.

During WWII, Anwar Sadat conducted secret deals with the Axis Powers in return for their help to remove British forces from Egypt. The British found out about this and put Sadat behind bars.

After WWII, Sadat continued to call for the end of Britain’s hold on the country. He was very active in drumming up anti-British sentiments in Egypt. In addition to being a member of the Free Officers, Anwar Sadat was a member of a number of groups and movements, which included: the Muslim Brotherhood, the Young Egypt (a group that can only be described as fascist at best), and the Iron Guard of Egypt. Many of those groups and movements were radical at best.

In the summer of 1952, the Free Officers Movement, under the leadership of Gamal Abdel Nasser, Mohammed Naguib, and Anwar Sadat, instigated the Egyptian Revolution. The group called for the overthrow of King Farouk. Within a few months, the Free Officers had dismantled the constitutional monarchy of Egypt and Sudan. After the Egyptian Revolution, the country was declared an Arabic Republic and Mohammed Naguib was sworn in as the first president of Egypt on June 18, 1953.

President of the National Assembly

After a brief term in office, Mohammed Naguib was overthrown by his second in command, Gamal Abdel Nasser, in late autumn of 1953.

President Gamal’s administration appointed Anwar Sadat the minister of state in 1954. Anwar Sadat also served as the editor-in-chief of Al Gomhuria – a daily newspaper set up by the state after the Egyptian Revolution of 1952. In the coming years, Sadat steadily rose through the rank of the governing party. He was the Secretary of the National Union in 1959. A year later, he became the President of the National Assembly, a position that he would occupy till 1968.

All throughout the 1960s, Anwar Sadat was commonly seen as the second in command to President Gamal Abdel Nasser. Therefore, it came as no surprise when he was sworn into power after the death of Nasser in October 1970.

In less than a year in office, Sadat had successfully expelled many loyalists of Nasser from government. He called this exercise the Corrective Revolution.  On the foreign front, Sadat gradually steered Egypt clear from the Soviets into the camp of the United States. Many Soviet military officers and personnel were expelled from Egypt. Many of his policies were designed for him to consolidate power even further.

He angered a large section of the Egyptian public after he put behind bars Vice President Ali Sabri and a number of other high-ranking officials from the Nasser regime. He also curtailed the unbridled powers of Egypt’s secret police. This move of his was met with great applause from the public.

With Nasserists (supporters of ex-president Nasser) largely out of the political and security apparatus, Sadat allowed a number of Islamist movement to thrive unimpeded.

Sadat was fluent in Persian. He used this ability of his to bring Egypt and Iran closer. In 1971, he gave a speech (in fluent Persian) before the Iranian parliament in Tehran. He and the Shah of Iran, Mohammad Reza Pahlavi, maintained a very strong bond all throughout the 1970s.

Egypt also received a lot of financial support from the Shah.  After the February 1979 Iranian Revolution deposed the Shah from power, Anwar Sadat allowed the royal family to live in Egypt. Sadat also honored the Shah’s death (on July 27, 1980) with a state funeral.

After three years of unresolved clashes between Israel and Egypt (along with other nations such as Jordan and the Palestine Liberation Organization), Sadat shocked the Arab World by giving the thumbs up to a peace proposal written by the United Nations. Sadat agreed to a peace deal with Israel, provided the latter respected the pre-war borders. The Israelis rejected the proposal.

By October 1973, Anwar Sadat was of the view that the Egyptian army was well prepared to take on Israel and reclaim territories that it considered Egypt’s. Sadat joined forces with Hafez al-Assad of Syria (father of current Syrian President Bashar al-Assad) and attacked Israeli forces in the Sinai Peninsula, effectively ushering in the October War.

At the early stages of the war, Sadat and his Syrian allies were able to dish out immense losses to the Israelis. For example, the Egyptians were able to breach the Bar Lev Line – one of the strongest Israeli defenses in the Sinai Peninsula.

After several failed attempts for both sides to ceasefire, Israel was able to marshal all her might (under the leadership of General Ariel Sharon) and encircle the Egyptian army in the Sinai Peninsula. By October 25, 1973, Sadat’s key ally, Syria, was hanging on to the hope of a ceasefire. The Israelis were only about 40 kilometers (25 miles) away from Damascus. As for Sadat, only 101 kilometers (63 miles) separated his country and the marching army of Israel. Anwar Sadat was forced to seek peaceful means to ending the conflict.

After years of negotiations between Israel and Egypt, with the U.S. and the Soviets serving as sort of peace brokers, a peace treaty seemed invetible in 1978.

It began with the Camp David Accords that took place on September 17, 1978. Prior to the signing, Sadat and his Israeli counterpart Prime Minister Menachem Begin had secret negotiations at Camp David, United States.

Leaders from the two warring sides – Egypt and Israel – signed the Camp David Accords at the White House. For their commitment to securing peace in the Middle East, Sadat and Begin were jointly awarded the Nobel Peace Prize in 1978.

A few months following the Camp David Accords, Sadat and Begin signed the Egypt-Israel Peace Treaty on March 26, 1979, in Washington, D.C. The treaty signing was witnessed by Jimmy Carter, 39th President of the United States. The peace treaty allowed for Egypt to become perhaps America’s strongest ally in the Arab World.

Did you know that the peace treaty signed between Israel and Egypt continues to hold up to this day?

Another outcome of the Egypt-Israel Peace Treaty of 1979 was that it allowed Sadat to regain control of the Suez Canal. As part of the deal, the Israel army was to immediately vacate the territories of the Sinai Peninsula. From then onwards, Sadat continued to institute a very pro-West policies that was aimed at securing political and economic support from the west.

Anwar Sadat becomes the villain in the Arab World

A lot of sticks from the Arab World came the way of Anwar Sadat after he signed the peace treaty with Israel. Many of his critics stated that he was abandoning the ideals of Arab nationalism.

A good number of Arab countries described Anwar Sadat as one that prioritized his country’s interest over the rest of the Arab World. He was particularly berated for not including the aspirations of the Palestinians in the peace treaty. In the nutshell, he was considered a big sell out in the eyes of many Arabs.

Following the peace treaty, the Arab League had no option than to suspend Egypt from their circle. The headquarters of the League was relocated to Tunis, Tunisia. The Arab League was hell bent on stifling every trace of what they called “Zionist Entity” in the region.

The Muslim Brotherhood wanted more. They wanted the complete liberation of lands that belonged to the Palestinians. This, and many more other reasons, might have been what pushed his opponents to assassinate him.

How did Anwar Sadat die?

His treaty with the Israelis infuriated Islamists and Arab nationalists in the country. Many of these Islamists were at one point biggest supporters of Sadat.

The Egyptian Islamic Jihad movement was the most potent of Sadat’s worries. The group was building up gradually and readying themselves to topple Sadat. They tried to model their Islamic revolution based on the one that took place in Iran in 1979.

Sadat fought back by arresting several thousands of the Egyptian Islamic Jihad group. He also arrested members from the Coptic Church and other university professors. His clamp down on the opposition was fierce and brutal.

On October 6, 1981, at an annual victory parade in Cairo, Sadat was fatally shot by Lieutenant Khalid Islambouli – a member of the small jihadist movement in the military. The attackers used automatic rifles.

On the day Sadat was assassinated, 11 other people were also killed. The dead included the Cuban ambassador to Egypt, a general from the Omani military, and a bishop from the Coptic Orthodox church.

The assassin, Khalid Islambouli, was later found guilty of treason and executed in April 1982.

Sadat’s funeral ceremony was uncharacteristically attended by three former presidents of the United States – Gerald Ford, Jimmy Carter and Richard Nixon. Gracing the ceremony was also Sudan’s president, Gaafar Nimeiry. The rest of the Arab World countries failed to show up for the Sadat’s funeral. And out of the 24 Arab League countries, only Oman, Somalia and Sudan had the decency to send diplomats to the funeral. Also in attendance was Menachem Begin (Israel prime minister).

Anwar Sadat, the first Muslim Nobel Peace Prize winner, was buried at a memorial just a few streets from where he was killed. 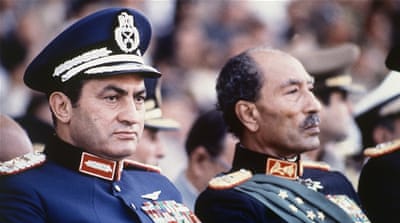 Following the assassination of Anwar Sadat, Hosni Mubarak, then vice president, was sworn into office as the 4th President of Egypt.

Other interesting facts about Anwar Sadat