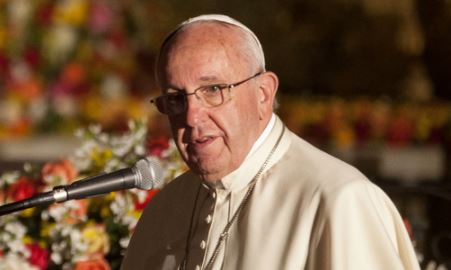 Since his election as the head of the Catholic Church in 2013, Pope Francis has been an inspiring figure for global peace and solidarity. Pope Francis, who is also the sovereign of the Vatican City State, has worked extremely hard on numerous issues, including global warming, women’s rights and participation in the Church, hunger and poverty reduction, refugee crisis, and uncontrolled capitalism and consumerism. His papacy has given the Vatican a new look, allowing the Catholic Church better address the challenges of the 21st century.

In the article below, worldhistoryedu.com explores 10 major achievements of Pope Francis. But first, here is quick look at the early life and career of Pope Francis, the Argentine who was born Jorge Mario Bergoglio.

Pope Francis was born Jorge Mario Bergoglio on December 17, 1936 in Flores, Buenos Aireths, Argentina. His father – Mario José Bergoglio – was born in Portacomaro, Italy and later moved to Argentina to work as an accountant. Although born in Buenos Aires, his mother – Regina María Sivori – also had Italian decent, as her family came from northern Italy.

It has been stated that Bergoglio’s parents left Italy because the wanted to put behind the fascist regime of Benito Mussolini.

His decision to become a Catholic priest stemmed when he was giving his confession. He then enrolled at Inmaculada Concepción Seminary in Villa Devoto, Buenos Aires.

In March 1958, he joined the Society of Jesus. He also had brief studies in Santiago, Chile before becoming a Jesuit in 1960. Being a Jesuit meant that Bergoglio vowed to commit himself to a life of perpetual poverty, chastity and obedience.

He earned a degree in philosophy at the Colegio Máximo de San José in San Miguel, Buenos Aires. Around the mid-1960s, he tutored at a number of high schools and Jesuit school in Santa and Buenos Aires.

On December 13, 1969, Bergoglio was ordained as a priest by Archbishop Ramón José Castellano (Archbishop of Córdoba between 1958 and 1965). He would then proceed to be the master of novices at Villa Barilari and later a professor of theology in Facultades de Filosofía y Teología de San Miguel (Philosophical and Theological Faculty of San Miguel).

On April 22, 1973, he made his final Jesuit vow and went on to be appointed provincial superior (for a six-year term) of the Society of Jesus in his country. Between 1980 and 1986, he was the rector of Facultades de Filosofía y Teología de San Miguel.

Did you know: In his youth, and before becoming a chemist at a food science lab, Pope Francis worked as janitor and a bouncer?

The following are 10 key achievements of Pope Francis:

As archbishop of Buenos Aires, he worked to alleviate many problems in the slums

Bergoglio’s remarkable efforts in helping the needy in deprived places in Buenos Aires earned him the nickname “Slum Bishop”. His tenure as archbishop of Buenos Aires witnessed increased Catholic priests’ presence in many of the slums of the metropolis. Those priests offered invaluable counselling services to young kids who otherwise would have ended in some awful social vice.

With proper handling of the archdiocese’s finances, Bergoglio was able avert some very dire financial problems. This allowed the archdiocese to use its resources very effectively in the service of the needy in the community, especially those in the slums.

As Catholic priest during the brutal regime of the junta in Argentina, Bergoglio came to the rescue of numerous people that were fleeing persecution of the military generals. He also admonished the military dictatorship for their involvement in numerous human rights abuses. 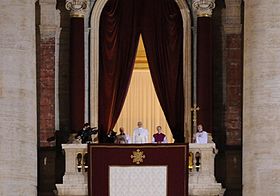 Francis appears in public for the first time as pope, at St. Peter’s Basilica balcony, 13 March 2013

His background in the Society of Jesus meant that he became the first Jesuit to be elected pope. Francis, 76 years old by then, was elected on March 13, 2013. His election came on the fifth ballot during the 2013 papal conclave. According to Cardinal Christoph Schonborn, Pope Francis election came following two major supernatural phenomena. The first spiritual sign happened in the conclave while the second happened as friends of Schönborn mentioned Francis’ name in the cardinal’s ear.

Pope Francis is also the first pope to hail from the Americas, as well as the first from the Southern Hemisphere. Being an Argentine, Pope Francis on 2013 became the first non-European to lead the Holy See since the reign of Gregory III, who was from Syria.

On March 13, 2013, donning a white cassock and an iron pectoral cross, he made his first public appearance at the balcony in St. Peter’s Basilica. Six days later, on March 19, a papal inauguration was held for Pope Francis at St. Peter’s Square.

Rolled out reforms in the Roman Curia

One of his first decisions as the Bishop of Rome came in the form of reforming the Roman Curia – the administrative institutions of the Vatican. Ever since the apostolic constitution Pastor bonus set out by Pope John Paul in 1988, the Vatican has not seen any major changes in the way the Roman Curia operates. Pope Francis set out to change this by working hard to introduce a new apostolic constitution that will make the structure and operations of the Curia more modern and fitting the needs of the modern world.

With the monies saved from abolishing bonuses received by Vatican employees, Pope Francis was able to donate those monies to charity. The pontiff also ended the 25,000-Euro bonuses paid to cardinals on the Board of Supervisors at the Vatican bank.

Francis made a public acknowledgement of the fact that some Catholic priests and bishops were involved in the horrific practice of abusing religious sisters. He would then follow this up with a three-day summit on the sexual abuse scandal that has been a thorny issue in the church.

The summit, which took place in Rome in February 2019, Pope Francis’ way of assuring the world that his papacy was going to be very tough on sexual offenders hiding behind the clerical collar to commit heinous and unspeakable acts. That same year, he announced that he was creating open channels of communication directly to his office that will enable people to report bishops that abused their power and positions.

Carried out decentralization of the governance of the church

To make sure that his proposed reforms get implemented smoothly, he appointed a number of known critics of the Vatican operations to the Council of Cardinal Advisers.

The Pope, who is also the Bishop of Rome, has been very vocal about the need for the church to be decentralized away from Rome. According to Francis, such a system will allow the church to better meet the varied needs of people around the world.

Francis was involved in diplomatic process that helped patch things between the U.S. and Cuba

Right of the bat after becoming pope in 2013, Francis worked extremely to restore diplomatic relations between the United States and Cuba. For about six decades, the two countries had been at loggerheads owing to their differences politically and ideologically. Francis took it upon himself to bridge the gap between the two countries.

Francis’ hard work paid off as the leaders of the two countries – U.S. President Obama and Cuban leader Raúl Castro – were able to patch things up at a meeting in Panama in April 2015. Kind courtesy to months of dialogue Francis had with leaders of both countries, President Obama capped the historic normalization of ties with a visit to Cuba in March 2016. President Obama’s Cuba visit was equally an historic one, as he was first U.S. president to visit the northern Caribbean nation since 1928.

An advocate for greater involvement of women in the church

Prior to Pope Francis, only men could be instituted to the ministries of acolyte and lector. That all changed in January 2021, when Pope Francis gave bishops the permission to institute women into those ministries.

Francis has also appointed a number of women to fill positions that were previously the preserve of men. For example, he appointed Nathalie Becquart, a member of the Xaviere Missionary Sisters, to the position of co-undersecretary of the Synod of Bishops. During his papacy, women are allowed to become full members of the dicasteries in Rome.

Did you know: Pope Francis included women and Muslims in his first Holy Thursday ritual of washing and kissing the feet of people? The participants, who were between the ages of 14 and 21, were juvenile offenders. It comprised 10 males and 2 females, including two Muslims.

Promotes causes that aid refugees across the world

Inspired by how Saint Francis of Assisi was kind and gentle to people in need of help, Francis has been a devout advocate of causes that aid refugees and people trapped in conflict zones around the world. He used his position as the head of the Roman Catholic Church to raise huge awareness to the plight refugees during the European and Central American migrant crises.

For example, while on a visit to the top religious leaders in Athens, Greece, Francis visited the Moria Refugee Camp that is located on the Greek island of Lesbos. Along with Ecumenical Patriarch Bartholomew and Archbishop Ieronimos II of Athens, Francis signed a joint declaration, calling the world to collectively come to the aid of refugees in those regions.

Other significant accomplishments of Pope Francis

Francis has opposed extreme forms of neo-nationalism and religious intolerance

In spite of claims that he has a soft spot for leftist organizations across the world, Francis has not flinched in preaching against all forms of extremism, both ideological and religious. At a time many conservative Catholics would have found it unthinkable for a pope to visit Iraq, Pope Francis proved to world just how tolerance and inter-faith dialog can produce amazing results.

In March 2021, Francis made a historic visit to Iraq, where he met with Grand Ayatollah Ali al-Sistani, a top Muslim cleric in Iraq. Francis also demonstrated how religions of the world could peaceful coexist by visiting the famous ancient Mesopotamian city of Ur, a place commonly seen as the birthplace of the Prophet Abraham (known in Islam as Prophet Ibrahim).

Francis papacy saw the Vatican recognize the state of Palestine. And in May 2015, he had a meeting with Palestinian president Mahmoud Abbas at the Vatican. A year prior to his meeting with the Palestinian leader, he had made a visit to Israel, where he gave several speeches on numerous subjects mostly on the need for peace between Israel and Palestine. To show the Vatican’s support for the downtrodden and peaceful Palestinians struggling for social and political justice, Pope Francis made a symbolic gesture by canonizing two Palestinian nuns in 2015.