Take an in-depth look at how the first woman Pandora was created, as well as how the gifts that the Greek gods bestowed upon her become humanity’s worst nightmare.

Meaning of the metaphor

The phrase “Pandora’s Box” is used whenever a simple situation or event quickly takes a turn for the worse, resulting in a series of ceaseless and uncontrollable complications. The origin of the phrase emerged from ancient Greek mythology about how the first woman created by the gods unleashed misery on the earth, thereby ending humanity’s Golden Age.

Ancient Greek poet Hesiod is credited with writing the epic poems Works and Days and Theogony. Most likely written in the 7th century BC, the two poems contain the story of Pandora’s Box and how the holder, Pandora, unknowingly released into the world all manners of misery and evils.

The story recounts how the Greek Titan Prometheus – a fire god and god of trickery – stole the sacred fire from the abode of the gods on Mt. Olympus. Prometheus, who in many cases is seen as the creator of men, was a benevolent deity. He desired nothing than to share the gift of fire with his creation, mortal men.

Enraged by Prometheus’ bold defiance, Zeus, the king of the gods, decides to even out the scale. He orders his son Hephaestus, the Greek god of fire and divine craftsmen, to create a woman out of earth.

According to Hesiod, once the woman, Pandora, was created, the gods bestowed numerous gifts upon her, including good looks, charm, wits, curiosity, and the ability to tell lies. For example, the Greek goddess Athena gifted Pandora an elegant dress and showed her how to make clothes. Aphrodite, the goddess of love and beauty, showered copious amounts of grace on her. Her name “Pandora” therefore came to mean “all gifted” or “she who gives all gifts”.

When it came to Zeus’ turn to give Pandora a gift, the king of the gods gave Pandora a jar (or box) so elegantly designed that it instantly caught the attention of Pandora.

Unbeknownst to Pandora, Zeus had placed in the box all kinds of human toil, sufferings and evils. He also placed the spirit of hope in the box.

With Pandora all set and ready, Zeus sent Pandora to Epimetheus, a titan and the brother of Prometheus. Zeus was fully aware that Epimetheus would fall head over heels for Pandora.

In spite of Prometheus’ stern warning, Epimetheus went ahead and married Pandora (“sender of gifts”), making her the first bride of the human race.

Pandora’s curiosity gets the better of her

One thing ancient Greek gods were good at was acting in a very cunning and sly manner. This trait of theirs often times wreaked immense havoc on the race of men. One such case was the one with Pandora.

When creating Pandora, the gods (Zeus) purposely placed in her loads of curiosity and the propensity to lie. Zeus then went ahead to intentionally make his gift – Pandora’s Box – look very catching on the eye.

Therefore it came as no surprise that Pandora’s curiosity got the better of her, making her very eager to see the contents that Zeus had placed in the box. No sooner had she opened the box than did she see the grave mistake she had made. According to Hesiod, an awful lot of misery and evil immediately came out of the box and spread to all four corners of the world.

The end of humanity’s Golden Age 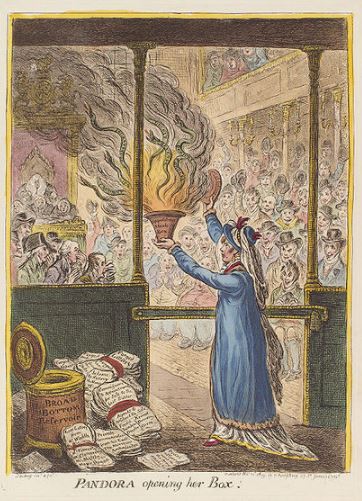 Prior to the 16th century AD, the phrase used was “Pandora’s Jar” and not Pandora’s Box | Image: James Gillray cartoon, 1809

Just as dark clouds of misery engulfed the world, Pandora marshaled a bit of strength and shut the box close. All that was left in the box was the spirit of hope (known as “Elpis”).

The evil contents of the box in effect brought an end to the Golden Age of humanity. The ancient Greeks believed that prior to Pandora’s coming the race of men were prosperous and lived in a completely harmonious environment.

Pandora’s Box: Meaning and Significance of the myth

Ancient Greeks reasoned that in order to navigate through the ills of this world, humans ought to work. Pandora’s coming threw a wrench into a perfectly harmonious and prosperous system (i.e. humanity’s Golden Age). It was Zeus’ way of exacting punishment on mortal men for graciously receiving fire from Prometheus.

Therefore, Pandora’s Box can be seen as the steep price the world pays for all the benefits that we get from “fire”. Even for an ancient civilization as that of ancient Greeks, fire was extremely important. As a matter of fact, the hearth in the homes of ancient Greeks was considered a very sacred place, as it was vital in keeping the home warm and meeting other domestic needs. They believed that quenching the fire at the hearth could spell doom for the home and city.

The above explains why Zeus was incensed after Prometheus stole the sacred fire from Mt. Olympus.

To modern civilizations like ours “fire” encompasses knowledge, science and technology. The very inventions that were meant to bring us improved health and advance the course of our civilizations become the very instruments that poison our water, choke the air, and kill the land.

Similarities between Pandora and Eve

In Abrahamic religions, Eve is recognized as the first woman created by God. One cannot help but notice a striking resemblance between the story of Eve and that of Pandora. In both cases, a race of [naïve and/or innocent] men (Adam from a Biblical perspective) lived in habitat that was pristine and free from all evils. The demise of that habitat (Garden of Eden) only occurs the moment the first woman was introduced.

Both stories are classic retelling of how humanity lost the grace of the gods (or God) by falling prey to deception of a cunning being. In the case of those Abrahamic religions, that cunning being is depicted as Lucifer (Satan), the bringer of knowledge and evil. 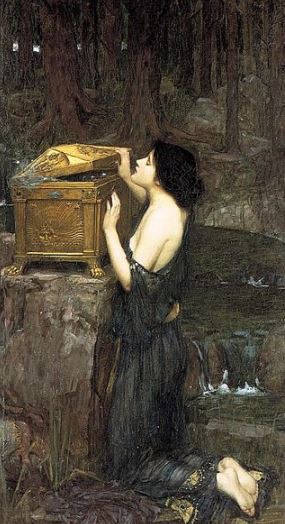 Starting around the 16th century AD, authors and mythologists began using the phrase “Pandora’s Box” instead of “Pandora’s jar”. This change most likely stemmed from a mistranslation by Rotterdam-born humanist Erasmus. It must be noted that in the Greek word that Hesiod used in the epic poems was “pithos”, which means a large storage jar.

Lilius Giraldus of Ferrara was another 16th-century writer who mistranslated the word “pithos” to mean casket (“pyxis”). This explains why we sometimes see “Pandora’s Casket” or “Pandora’s Box” in literature works.

In some accounts of the story, Hermes, the Greek messenger god and inventor, was the one who created Pandora out of the earth.

Many scholars have opined that Hesiod’s Theogony was undoubtedly inspired by similar tales from much older civilizations (than ancient Greece) in the Mesopotamian region.

Over the centuries, a slightly different account of the story gained some bit of popularity. Proponents of this account state that Pandora’s jar did not contain great misery and evil as it is widely believed. Rather the jar had only good things placed in it. The story goes on to say that those good things could have gone to the human race had they not been let to escape into the vast cosmos. As a result, humanity was left with the only content that stayed in the box, i.e. the spirit of hope.