American lexicographer and journalist, Noah Webster, popularly known for his American Dictionary of the English Language, once stated that “grammar is formed on language, and not language on grammar.” To Webster, grammar and spelling should have living and breathing structures susceptible to changes in the spoken language over time.

Webster spent all his working life trying to inject American culture into spoken English and spelling in the United States. Historians hold him partly responsible for encouraging the variations we see today between British English and American English spellings.

So the next time you come across words such as “colour”, “humour” and “analyse” in say a BBC article online, just know that had it not been for American lexicographers like Noah Webster we would probably have been spelling those words like that. What other subjects did Noah Webster have an impact on?

The article below presents the biography and 8 major accomplishments of Noah Webster, one of the world’s most renowned lexicographers.

Who was Noah Webster?

Noah Webster was born in 1758 in West Hartford, Connecticut. His parents were Noah Webster Sr. and Mercy Webster. His father, Noah Webster Sr., was a farmer, a church deacon and the captain of the militia in his town [during the American Revolution].

Around age 16, he enrolled at Yale University only for him to pause his studies in order to fight for America’s independence during the American Revolution. Ultimately, he graduated from Yale in 1778. He was also a huge advocate of the ratification of the United States Constitution.

After school, he took on a number of jobs, including once working as a teacher at Glastonbury and then later a clerical worker.

Under the tutelage of Oliver Ellsworth (future Supreme Court Chief Justice), he studied law. In 1781, Noah Webster was admitted to the bar. He practiced primarily in Hartford up until 1793.

As a teacher during the 1780s, Webster bemoaned the fact that the new nation of America did not have its unique education, as she was still heavily dependent on the culture bequeathed to her by the British. Therefore, he set out to change this by starting with the language.

Webster always maintained that spoken and written language should not be based on grammar; instead the grammar should be underpinned by the language. This point was made clear in his subsequent publications in 1784 and 1785.

Webster’s 1828 dictionary (which contained about 70,000 entries) sold out in less than a year. In the U.S. alone, it sold about 2,500 copies, and about 3,000 copies were sold in England even though it was criticized for being too American centric. The dictionary focused solely on American spellings, American English usage and not British English usage and spelling.

His first dictionary was the first to have technical terms from a number of disciplines. It had 30,000-40,000 definitions that were not found in any previous dictionary.

Webster passed away in 1843, aged 84. The famous lexicographer was laid to rest in Grove Street Cemetery, just close to Yale University campus in Connecticut, U.S.

In 1847, publishers George and Charles Merriam purchased the rights to the last dictionary that Webster was working on from his estate. The dictionary would go on to be called Merriam-Webster, making an immense amount of fortune for the publishers.

Did you know: According to the dictionary, the name Webster means a “female weaver”? 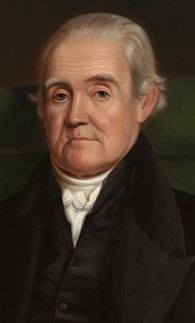 The following are some of the major feats chalked by Noah Webster, the man’s whose name is synonymous with the word ‘dictionary’:

Noah Webster’s goal was to make spoken and written English in the country ooze out American culture. As part of his efforts to reform American education, he came out with The American Spelling Book (1783). Also known as the “Blue-Backed Speller”, the book contained reforms that Webster wanted to see in spelling, grammar and usage of words.

To this day, Webster’s The American Spelling Book, the book has remained in print since the 18th century, has sold over 100 million copies.

Reforms in education and American English

He reasoned that in order for America to have a distinctive education the American English should reflect the values and ideals that nation was built upon. He was a huge advocate for incorporating into the language the ideals of democracy, pursuit of happiness, the can-do spirit and a sense of moral responsibility.

His reforms in spelling are some of the reasons why there are differences in American English and British English spellings.

Noah Webster was saddened by the fact that late 18th century American copyright laws on book piracy was not able to adequately apprehend the people who pirated his books and many other popular books of the time. And because much of his income came from the sales of his books, he reasoned that the laws ought to catch up.

For years, Webster lobbied very had to get state and local legislatures to come out with robust copyright laws that could properly rein in on the violators and book pirates. He also called for the end in the discrepancies in existing copyright laws across the nation. He reasoned that those discrepancies allowed copyright infringers to operate smoothly. His years of lobbying paid off when the Copyright Act of 1831 got passed.

Established a number of newspapers to promote American culture

To make some extra income, he took on a number of teaching and lecturing jobs in New York. He also established a newspaper/magazine called the American Magazine in 1787. Although the magazine ran for a short time, Webster was able to get his message out to the public, educating them on a host of subjects, including government, literature, agriculture, and childhood education.

In 1793, he established the daily newspaper called The American Minerva, which supported the Federalists of the time. He was recruited by one of the leaders of the Federalist Party, Alexander Hamilton.

He also established The Herald, a semi-weekly newspaper. Both newspapers did not reach as many readers as he expected, forcing him to sell them in 1803.

A Compendious Dictionary of the English Language (1806)

He published A Compendious Dictionary of the English Language in 1806. The dictionary, which was his first dictionary, had about 45,000 words, about 5,000 words more than the words in Samuel Johnson’s dictionary. Webster’s dictionary was the first to separate the letters I and j as well as u and v.

Authored ‘An American Dictionary of the English Language’

In 1807, Noah Webster started working on a more comprehensive American dictionary. About two decades later, in 1828, the first edition of An American Dictionary of the English Language was published in two volumes.

Webster’s dictionary (which has about 70,000 entries) sold out in less than a year. In the U.S. it sold about 2,500 copies, and about 3,000 copies were sold in England even though it was criticized for being too American centric. The dictionary focused solely on American spellings, American English usage and not British English usage and spelling.

It was the first dictionary to have technical terms from a host of disciplines, including business, economics, science and the arts. It had 30,000-40,000 definitions that were not found in any previous dictionary.

Other notable accomplishments of Noah Webster

He founded the Connecticut Academy of Arts and Sciences.

In 1827, Webster became a fellow at the American Philosophical Society.

He was a member of the Massachusetts legislature.

Noah Webster was not a fan of vulgar words in the English language. This made him level some criticisms at ‘A Dictionary of the English Language’ (1755), a 40,000-word dictionary that was co-written by Samuel Johnson. His aversion to vulgar words made him write a version of the Bible that used euphemisms in the place of words that he considered too direct and frank statements in the King James Version.

His father, Noah Webster Sr., was a farmer, a church deacon and the captain of the militia in his town. Webster Sr. also served as the town’s justice of the peace after America’s independence.

In 1789, Noah Webster tied the knot with Rebecca Greenleaf, the daughter of an affluent man from Boston. Their marriage, which lasted for over half a century, brought forth eight children – six daughters and two sons.

In 1822, he relocated to New Haven and earned a Doctor of Law degree (LL.D) from Yale University.

Noah Webster was not only well-versed in grammar and language, he was also capable of writing on a host of other subjects, including in politics, government, economics, and medicine.