Alexander Hamilton was a Caribbean-born US nationalist who took part in founding the United States of America. Had he had the chance to be president of the United States, he sure would have set a presidential mark.

Hamilton is highly revered as one of America’s greatest statesmen. The US Coast Guard, the Federalist Party and the New York Post (a newspaper) were all founded by Alexander Hamilton. He used his position as first Secretary of the Treasury to author a number of economic policies for President George Washington’s administration.

On foreign affairs, Hamilton achieved feats such as fostering fair trade relations between the US and Britain. He played key roles in establishing a national bank and a system of tariffs for the US.

Hamilton was an illegitimate child born in the Caribbean, somewhere in the mid-1750s. His birthplace was Charlestown – capital of Nevis (an island in the east Caribbean Sea). He was the biological son of Rachel Faucette and James Hamilton (a Scottish man). Hamilton’s parents did not marry each other by law; they were just lovers. James Hamilton later deserted Hamilton’s mother, Rachel.

Hamilton was orphaned when his mom died of yellow fever in 1768. The orphan was adopted by a rich Nervis merchant, Thomas Stevens. Subsequently, Hamilton was taken to New York to begin his education. This would turn out to be an intelligent investment for those who catered for him.

Hamilton took a clerical work at a local import and export firm, Beekman and Cruger. He and his brother stayed with their cousin Peter Lytton. Lytton later committed suicide and this separated Hamilton and his brother James Hamilton Jr.

Hamilton read many books and later ventured into writing. While a clerk, he wrote a life-changing letter to his dad. The letter contained a perfect description of a hurricane which devastated Christiansted in 1772. A biographer described the letter as astounding. Hamilton’s impressive essay got him an educational fund to North America. Community leaders could not just believe that a self-educated clerk could exhibit such creativity. 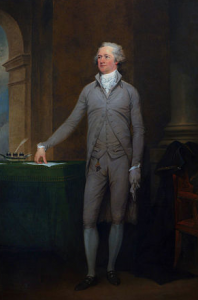 A Church of England school denied membership to Hamilton because his parents weren’t legally married. Private classes were organized for Hamilton and James. Luckily enough, Hamilton had his own family library with 34 books. He used them to supplement his education. In 1772, he went to Boston by ship. From Boston, he proceeded to New York and sold cargo to fund his education. Hamilton prepared himself for college by going to a preparatory school in New Jersey– Elizabethtown Academy.

In autumn of 1773, he got admission to King’s College as a private student. In May 1774, Hamilton’s higher educational journey kicked off; he had officially matriculated. A former roommate of Hamilton testified that the future politician showed clarity of expressions when he appeared in public for the first time. While in college, Hamilton and some undergraduate students formed a literary society.

The political journey of Hamilton was evident when he wrote two articles and attacked the Quebec Act. Before that, he had anonymously written responses to a clergyman who published pamphlets and promoted the Loyalists in 1774.

Hamilton’s graduation was marred when the college closed down due to British invasion of the city. The American Revolutionary wars (which Hamilton supported) had started. When the war was over, Hamilton wrote and passed the bar exam. In October of 1782, he was licensed to debate on cases before the US Supreme Court.

Achievements during his military career

When American soldiers engaged with the British in 1775, Hamilton and other alumni of King’s College joined a New York militia company, named the Hearts of Oak. There he studied military tactics and history. He also led a mission to seize British cannons. Hamilton later became the captain of an artillery company in New York. He even partook in the Battle of Princeton and helped America to come out victorious in the war.

Contributions to the U.S. Constitution and the Federalist Papers

Hamilton and three other statesmen wrote a lot of papers which supported the new Constitution that had been drafted. These were known as the Federalist Papers. Of the 85 essays, Hamilton wrote 51 while James Madison and John Jay wrote 29 and 5 essays respectively.

Hamilton took an offer and worked as a chief staff aide to George Washington. He handled high-profile letters to Congress, governors of states and army generals. His status and reputation in those circles grew tremendously. Soon, he was drafting letter orders and letters for Washington. Hamilton was also involved in intelligence and diplomacy.

First U.S. Secretary of the Treasury 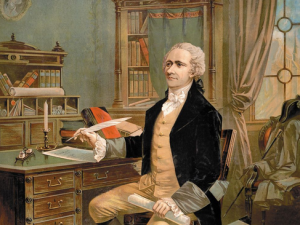 President Washington gave Hamilton an appointment to serve the U.S. as Secretary of the Treasury. This was the first time in US history that a person was chosen to work in charge of that department. After taking office in September of 1789, Hamilton dealt with submission of financial reports such as National Bank, Mint Establishment, Public Credits, Manufactures etc. Much of the US government structure was worked out during Hamilton’s tenure as treasury secretary.

Hamilton got involved in a misunderstanding with Aaron Burr; a sore loser in an election. Burr claimed that Hamilton supported his opponents to defeat him on two occasions. This incensed Burr and it led to a duel (a challenge between two people armed with deadly weapons to settle a feud) between them on 11th January 1804. When the two enemies met, both men ended up firing shots but Burr was smarter on the trigger and gunned down Hamilton. The paralyzed Hamilton later died of his wounds the following day.