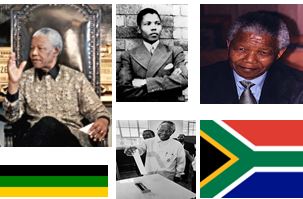 Revered across the world for his unflinching dedication to multiracial democracy, social justice, peace and reconciliation, Nelson Mandela was without a doubt South Africa’s greatest leader and politician. Born into the Xhosa royal family, Mandela spent close to three decades (1962-1990) imprisoned for his works against institutionalized racism and brutal racial segregation laws in apartheid South Africa.

Owing to his involvement in students’ protest against poor dormitory conditions, he was expelled from the University of Fort Hare – an all-black tertiary institution located in Eastern Cape. In December 1940, Mandela went back to his guardian Chief Jongintaba in Mqhekezweni. Upon realizing that Jongintaba had set up an arranged marriage for him, Mandela fled to Johannesburg the following year.

While in Johannesburg, he became friends with many African National Congress (ANC) members, including Walter Sisulu. Although he never publicly joined the Communist Party, Mandela did indeed attend a number of their meetings in secret.

In 1943, he joined the ANC and went on to establish the Youth League within the organization. Mandela served as a member of the executive committee while Anton Lembede served as the president.

Head of the Defiance Campaign

Initially, the ANC and its Youth League deployed nonviolent approaches; however, the organization gradually adopted radical measures in response to the plethora of apartheid laws that were enacted by the ruling National Party. Mandela, along with the likes of Peter Mda, Walter Sisulu and Tambo, insisted on using this approach in order to bring the apartheid government to the negotiating table.

Mandela and his colleagues also forced the resignation of moderate ANC members that did not support their tactics. In 1952, he replaced Alfred Bitini Xuma on the national executive committee of the ANC. Subsequently he rose to become the president of the ANC Youth League. As president of the league, he called for a strong front in the fight against apartheid, using strikes and boycotts to cripple the apartheid regime.

As head of the Defiance Campaign in 1952, he successfully assembled over 10,000 people to protest in a nonviolent way in Durban. His charisma and speeches drew thousands of people to the ANC’s objectives. For this, Mandela (along with several ANC members, including Sisulu and Yusuf Dadoo) was apprehended by the authorities and sentenced to nine months in prison under the Suppression of Communism Act.

The law firm, which was named Mandela and Tambo, was established in August 1953 in Johannesburg. The firm took all manner of cases such as the ones involving excessive use of force by police and other forms of human rights abuses. Threatened by the sheer number of cases Mandela and Tambo took on, the authorities (using the Group Areas Act) took away the firm’s license. This forced Mandela and his partner to relocate the firm to a rural area.

In December, 1956, Mandela and several ANC members were put on trial for treason. The Treason Trial of 1956 (as it came to be called) saw Mandela and his defense attorney Vernon Berrangé put up a strong defense against the prosecution. On March 21, 1960,  the infamous and bloody Sharpeville massacre took place. The protest, which started peacefully, ended up claiming the lives of at least 69 unarmed protesters as the authorities clamped on them.

Gave his famous speech – The Speech from the Dock

Mandela, along with 10 other top ANC members, was charged with sabotaging the government and intentions to overthrow the government. The prosecution demanded the death sentences for them. The infamous trial, which began in October 1963, came to be known as the Rivonia Trial.

The Pretoria Supreme Court in June, 1964 found them guilty and gave them life sentences. During the trial, Mandela’s unflinching commitment to the pursuit of democracy was cemented when he gave his famous speech- the Speech from the Dock.

The biased nature and the verdict of the trial drew wide international outcry, with many countries calling for Mandela’s release. Both the United Nations and World Peace Council called for the government to grant him his freedom.

On February 3, 1990 – nine days before Mandela was released from prison (Victor Verster Prison) – de Klerk announced that the bans on all political parties would be lifted, including that of the ANC. Mandela has been widely credited as the one who helped secure this.

At a national conference in July 1991 in Durban, the ANC unanimously elected Mandela president of the ANC. He replaced fellow anti-apartheid icon Oliver Tambo, who was by then frail and quite ill. Mandela applauded the ANC for electing a diverse group of people from different races to the national executive council. 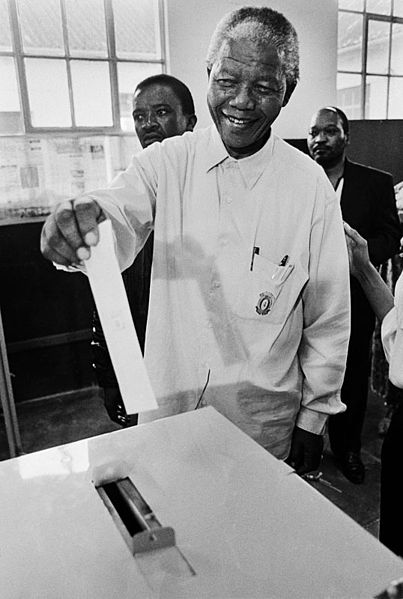 After a series of extensive discussions with the ruling National Party and members from Inkatha, the ANC led by Mandela was able to agree on the date for a general election. It was agreed that a multiracial election be held, granting black South Africans voting rights for the first time in South Africa’s history.

Nelson Mandela and de Klerk also agreed to establish a coalition government that would steer the affairs of the country for five years. From those negotiations, Mandela was able to secure an interim constitution underpinned by liberal democratic system which would see the creation of an independent constitutional court.

Nelson Mandela was the first Black President of South Africa

South Africa’s first democratic national election was set for April 27, 1994. The ANC, led by Nelson Mandela, won a sweeping victory, pulling about 63% of the votes. They also won 7 out of the 9 provinces in South Africa. The National Party of de Klerk and Inkatha won the remaining two provinces.

The general election of 1994 was a historic one which saw Mandel vote for the first time in his life (he voted at Ohlange High School in Durban). Although the ANC won 63% of the vote, they still fell short of the required two-thirds majority that would have given them the power to change the constitution. Regardless, the entire country was elated as Mandela became the first democratically elected President of South Africa – the first black South African to do so.

Mandela’s inauguration ceremony took place in Pretoria on May 10, 1994. The ceremony was watched by billions of people across the world. It was also attended by thousands of foreign dignitaries and world leaders.

As president, Mandela served as the head of the Government of National Unity, which comprised a coalition of ANC, Inkatha, and the National Party. As part of the negotiations, de Klerk and Thabo Mbeki became Deputy Presidents.

Mandela became the head of a nation that was deeply depressed socially, racially and economically. With mounting economic challenges and the high expectations black South Africans had, Mandela focused on getting the nation to heal from the brutal years of apartheid. He did this by establishing the Truth and Reconciliation Commission to investigate human rights abuses committed by both the apartheid government and the ANC.

Mandela strongly believed that the Commission, which was chaired by anti-apartheid icon Archbishop Desmond Tutu, would create a friendly environment capable of sustaining economic growth. The Commission’s work went down as one of Nelson Mandela’s greatest achievements.

Upon taking office, Mandela was very mindful of the fact that alienating white South African business elites could spell doom for the nation’s fragile economy. Time and time again, post-colonial African countries were too much in a haste to get rid of every remnant of the colonial systems, resulting in the evaporation of industries and foreign capital. Hence Mandela delicately steered the nation delicately from apartheid white minority rule to liberal and all inclusive democracy.

He assured the white South Africans that they will be fairly represented in the political and economic fabric of the new nation, a “Rainbow Nation”. He stood by those decisions in order to halt the brain drain as skilled white South Africans fled the country due to the high crime rates and high taxes.

In rolling out land reforms (For example, the Land Reform Act 3 of 1996 which protected the rights of labor tenants), he made sure that he secured a broad coalition so as to prevent any party from feeling aggrieved. Mandela also set his sights and efforts in fighting poverty. One tool that he deployed to great efficiency was the universal free education.

Under the Reconstruction and Development Program (RDP), which was later replaced with Growth, Employment and Redistribution (GEAR) in 1996, Nelson Mandela’s coalition government secured some amount of progress in housing, healthcare and electricity.

All in all, his liberal economic policies encouraged the constant flow of foreign direct investment into South Africa. The windfalls from those investments were channeled into welfare, old-age pensions, and child maintenance grants for the poorest of poor in South Africa. His administration also made healthcare free for children under six and pregnant women.

He spent his retirement rallying for several noble causes

Established a number of charity organizations that allowed him to continue his work in poverty alleviation and social justice. In 1995, he established the Nelson Mandela Children’s Fund that created scholarship opportunities for children across South Africa. To show his commitment to charitable initiatives, he donated about one-third of his annual income (552,000) during his presidency to the Nelson Mandela children’s Fund.

In 2003, the Nelson Mandela Rhodes Foundation was established in partnership with the University of Oxford. The goal was to create more and more educational opportunities for economically challenged students across the African continent.

The Nelson Mandela Foundation, his prized jewel which was established in 1999, pays enormous attention to rural projects and community health programs. Mandela used the foundation to combat the dreadful HIV/AIDS pandemic that ravaged the country through out the 1990s and early 2000s.

Other stellar accomplishments of Nelson Mandela: