As the wife of George Washington, the first president of the United States, Martha Washington was in effect the matriarch of our nation from the early years of the Revolutionary War to the end of Washington’s tenure in 1797.

The first First Lady of the United States of America, Martha Washington held a position that did not carry an actual official power and authority. In other words, the novelty of her position meant that she had to learn quickly and handle herself in a manner that did not make her or her husband look like European monarchs of the era. In spite of not having a sort of hard power, Martha proved herself vital in steering the affairs of the new nation, with many of her notable achievements coming behind the scenes.

Martha Washington was devoted to taking care of George Washington and making her children and grandchildren happy. She possessed the social skills of making the guests that attended evening parties in our nation’s temporary capitals – New York City and Philadelphia – feel very welcome. What else was our nation’s first First Lady most known for?

In the article below WHU presents Martha Washington’s most notable accomplishments. It includes the vital services she offered during the American Revolutionary War (1775-1783) as well as during George Washington’s two term in office.

She used her good manners, charming and vibrant personality to win over John Custis IV – father of Daniel Parke Custis

Beginning around her late teens, Martha’s beauty and elegant personality had caught the attention of a wealthy tobacco planter named Daniel Parke Custis (1711-1757). Custis, who was about twenty years Martha’s senior, was a late 30s bachelor not by choice. All two of his love interests had been deemed unfit by his extremely wealthy and grumpy father John Custis IV. So it came as no surprise when his father vehemently disapproved of his intention to marry the young Martha Dandrige.

Such was Martha’s personality and charm that upon meeting her future father-in-law, John Custis, the father of her first husband Daniel Parke Custis, she was able to convince the wealthy old man of why she was the best woman to marry his son. After about two years of courtship, Martha and Custis were able to get married on May 15, 1750.

Upon her husband’s sudden death (from a heart attack) on July 8, 1757, she inherited one-third of his vast estate and properties, including White House, a slaveholding plantation in New Kent County in Virginia, Per the law at the time, she was entitled to that share of Daniel Custis’s estate because Custis died without a will. The remaining two-thirds of Custis’s estates was split between the surviving children of Martha and Custis once they attained the age of maturity or got married.

Because her husband Daniel Custis died interstate (without a will), she inherited one-third of her deceased husband’s estate, making her the richest woman in Virginia at the time. | Image: Daniel Parke Custis – Martha’s first husband

Being a single woman, the law allowed Martha to own and manage properties. The 20 something widow rose to challenge and judiciously managed her deceased husband’s property, which included close to 18,000 acres of land and almost 300 enslaved people spread over five counties. Martha showed great deal of business intelligence in corresponding with Custis’s agents in England, taking full charge of all business issues of her late husband.  As the head of her late husband’s household, she shipped several goods, including tobacco, to England. She thus continued the profitable business venture of her dead husband, bargaining effectively with many of the English merchants that bought her plantation produce.

As the Revolutionary War increasingly got more and more intense, George Washington, as well as many of the officers and troops under his command, began to feel the pressure – physically and mentally exhausting pressure of the fierce war with Great Britain. Martha Washington did not hesitate to answer the call of her husband, who as commander of the Continental Army sourly needed the support of his wife to see him through those trying times.

It’s been said that Martha’s presence in the winter quarters and camp had tremendous impact on the morale and fortitude of not just her husband, but many other officers and soldiers of the Continental Army. She was beside her husband at his winter quarters throughout the war. In addition to banding with other wives of the soldiers and the officers in knitting socks and clothes for the army, she took it upon herself to entertain foreign officials and top-ranking colonial officials and politicians. She carefully managed her appearances and became a mother figure to the officers of the Continental Army.

Martha Washington’s presence inspired hope and fortitude among the troops. Her loyalty and support helped Continental Army General George Washington during his severe bits of depression, Martha thus served as his emotional rock. This was absolutely vital as General Washington couldn’t leave his army. During winter encampments, she joined her husband General Washington and gave all her support to Washington as he fought for freedom and independence for the American colonies. She was also instrumental in galvanizing the support of many women to help in the Revolutionary War.

She was an elegant, well-spoken, and skilled hostess during Washington’s presidency

American political playwright, satirist and acclaimed poet Mercy Otis Warren, who was one of the leading female figures of the American Revolution, heaped enormous praise on Martha Washington for her unflinching support given to George Washington and the American Revolution. The distinguished poet described her interaction with Martha as one that was cordial, polite and full of support.

By the time her husband had been elected as the nation’s first president, Martha had made a name for herself as a woman with impeccable social skills. And although she was not so thrilled about her husband’s decision to be president, as she described staying in New York City as akin to living in a state prison, Martha continued to be offer her unflinching support to Washington in all matters. She carried herself in a manner that matched the needs of the time. This allowed President Washington to focus on matters such as establishing the very pillars upon which the office of the president was built.

When George Washington, a distinguished officer from the Seven Years War, was selected by American Revolutionaries to lead the newly formed Continental Army in June 1775, Martha Washington rose to the challenge of managing her husband’s vast estate. When she was not visiting her husband and troops to lift up their morale, she was making sure that her husband’s estate remained afloat and profitable. With the help of a cousin of Washington, Martha showed apt skills in resource management and human supervision, as she supervised the butlers, house keepers, maids, cooks, waiters, spinners, laundresses, seamstresses and gardeners.

Martha Washington, who is usually depicted in the historical annals as this kind of grandmother figure in not just Mount Vernon, but the nation as a whole, helped lay the path for future first ladies of the United States to follow and make a difference in the nation’s affairs. Having set the precedent for the role, every first Lady of the United States that came after her was in one way or the other compared to her. It is no wonder many historians tend to describe her as a powerful symbol of “Republican Motherhood”, which has also been termed as the “cult of domesticity”.

Martha Washington tenure as the First Lady of the United States saw her hold almost informal weekly meetings every Friday. She received enormous praises from many influential people of the era, including powerful women like Abigail Adams, the wife of Founding Father John Adams, and Mercy Otis Warren. The former was very impressed by Martha’s powerful persona. Quote by Abigail Adams, July 12, 1789.

Martha Washington is often praised for adapting her persona to become the epitome of social norms at the time. She was also very fashionable, a good mother and a charming hostess. This did not take anything away from her ability to converse on any topic. It’s no wonder 19th-century historians and social commentators epitomized her as the ideal woman of their era. However, due to the prevalent values and aspirations of the 21st century, she is not so much seen as an ideal woman, with many preferring former First Ladies like Eleanor Roosevelt (wife of FDR) and Jacqueline Kennedy Onassis (wife of JFK).

Other notable achievements of Martha Washington 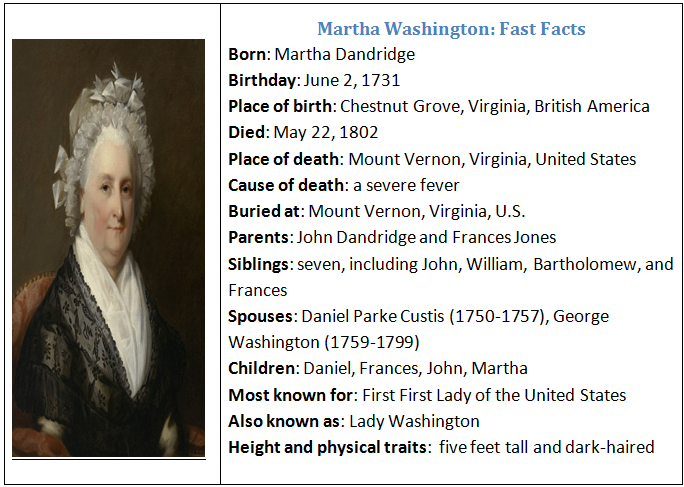