12 Major Achievements of Pharaoh Ahmose I 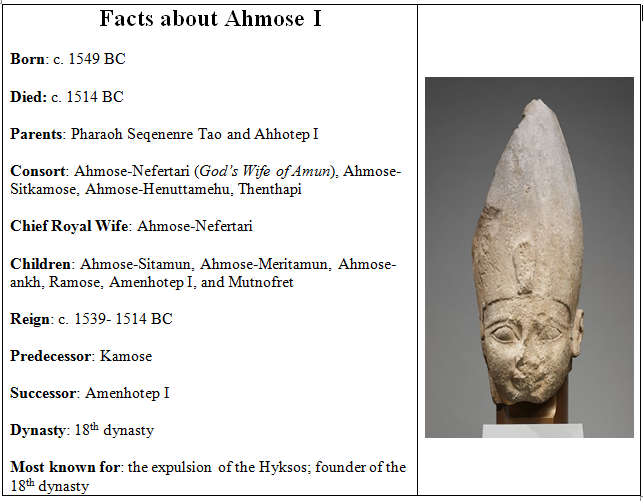 Ahmose I – Facts and achievements

Beginning his reign around 1539 BC, Ahmose I accomplished many things as king of Egypt. He is most known for establishing the first dynasty of the New Kingdom. His rise to throne happened when at just 10 years old he inherited the Theban crown from his older brother King Kamose. Ahmose would then go on to mount a strong military campaign against the Hyksos rulers in Lower Egypt.

After expelling the foreign rulers from ancient Egypt, he restored the traditional values of the Middle Kingdom. He also restored Thebes as the capital of Egypt.

What other major feats is Pharaoh Ahmose I most known for?

In the article below, World History Edu takes a quick look at some of ancient Egyptian Pharaoh Ahmose I’s notable achievements.

Liberated the land of Egypt from the Hyksos

At the time that Ahmose I assumed full control of Thebes, the Hyksos ruler was Khamudi. It’s been stated that Khamudi, who was in his 11th regnal year as king, found it extremely hard dealing with Ahmose and his Theban army. Ahmose laid siege to Avaris. Prior to that Theban king had undertaken a waterborne operation against the Hyksos army.

The Hyksos army came under waves and waves of attacks from Ahmose in the eastern Nile River delta.

Ahmose was a tactical genius. He knew that by taking the border fortification town of Tjaru he would be able to block supply lines between Canaan and Avaris. In no time, he had successfully erected a blockade on the city of Avaris, making it impossible for Hyksos allies in Canaan to come to the aid of Khamudi.

Avaris, in eastern Nile Delta, was able to hold on to its life after three attacks by Ahmose I. However, in the fourth attack, the Hyksos city of Avaris capitulated to Ahmose’s forces.

He went after Hyksos’ allies in Middle Egypt

Bent on completely removing the Hyksos from Egypt’s land, Ahmose I pursued leaders in Middle Egypt that had aligned themselves with the Hyksos. Around that same period he took hold of Memphis, a famous city in Egypt. With Thebes being the religious center of ancient Egypt, Memphis was the administrative capital.

After removing Hyksos influence in Middle Egypt, Ahmose quickly took Memphis. His military campaign was aimed at ending the more than a century reign of the Hyksos in ancient Egypt.

Ahmose I, son of Theban monarh Seqenenre Tao and Ahhotep I, is credited with being the founder of the 18th dynasty of ancient Egypt. His 25-year reign ushered in the New Kingdom, allowing Egypt to reach its peak. | Image: Dagger of Ahmose I Luxor Museum

Fought against the Hyksos in Avaris, the capital of Hyksos

Ahmose’s waterborne operation and land siege successfully forced the Hyksos out of Avaris. Scholars estimate that he achieved this by his 19th year on the throne. The Hyksos ruler Khamudi thus became the last of his family line of rulers.

Re-established Egypt as the dominant power in the region 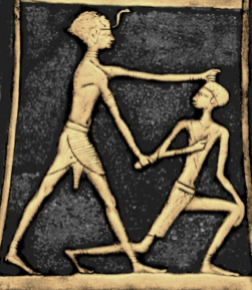 King Ahmose I of ancient Egypt expelled the Hyksos rulers from the Nile River delta | Image: Pharaoh Ahmose I slaying a probable Hyksos. Detail of a ceremonial axe in the name of Ahmose I, treasure of Queen Ahhotep II. Luxor Museum

Ahmose took advantage of the lack of any strong power in the region to reassert Egypt’s dominance in the region. To accomplish this said goal of his he carried out campaigns in Nubia and Syria. It’s been said that he marched his Egyptian army into places like Djahy in the Levant, and Kedem near Byblos.

Ahmose also went as far as Sharuhen (Tell el-Fārʿah) in Palestine, a stronghold of Hyksos. He besieged the city before bringing it to its knees in just three years.

For large parts of the Hyksos rule in Egypt, the Nubian rulers allied themselves to the Hyksos kings. This alliance infuriated Theban kings, including Ahmose I who longed to conquer Nubia and re-establish Egypt’s influence in the region.

It’s been said that Ahmose carried out three campaigns in Nubia. Ahmose met stiff opposition from the Nubian forces, including some Egyptian cities that were anti-Thebes. In the end, Ahmose came out on top.

Swiftly crushed every manner of rebellion in Egypt

He was also able to crush all forms of rebellions in Egypt that were fueled by anti-Theban sentiments. The leaders of Egyptian towns and cities that supported his military campaign were handsomely rewarded after he had successfully reunited all of Egypt.

Returned Egypt to its religious systems and art forms

Ahmose’s goal was to bring back the traditional ways and art forms that characterized the Middle Kingdom era. The Hyksos may have introduced a great deal of inventions and military armor to the Egyptians; however, Ahmose and his predecessors longed for the return of those conservative art forms and religious practices from the Middle Kingdom.

Elevated Theban local god Amun to the patronage of Egypt

At the start of their reign, the Hyksos rulers in Egypt had the Egyptian god Seth, god of storm, destruction and desert regions, as their patron deity. The decision to make Seth their patron deity was because they could identify him with the Syrian storm god Hadad.

On the other hand, Theban rulers venerated the sun/creator god Amun (or Amon) as their patron god. Therefore, on his way to reuniting Egypt under his rule, Pharaoh Ahmose I replaced Hyksos religious systems with a Theban religious system which had Amon as the chief deity of the pantheon. Ahmose I believed that the god Amun was the one that helped him drive out the Hyksos rulers from Egypt.

Ahmose worked very hard to return Egypt to the religious, social and cultural systems that existed before Hysos era, i.e. the Middle Kingdom era. However, he was mindful of the fact that administrative systems from the Middle Kingdom had to change if Egypt were to avoid fallen into the hands of foreign rulers again. Therefore, Ahmose set out to improve upon Egypt’s bureaucratic administrative system.

Moved the capital of Egypt from Avaris to Thebes

Since the Old Kingdom era, Thebes always served as the religious hub of ancient Egypt. Also, the city served as the capital of Egypt for many years during the Middle Kingdom era. However, that all changed during the Hyksos rule. The foreign rulers, who were of Asiatic origins, neglected the Upper Egyptian city and established Avaris as their capital and the seat of power.

After the Hyksos had been expelled from Egypt and Avaris destroyed, Ahmose I restored Thebes as the capital of Egypt. From Thebes, Pharaoh Ahmose governed all of Egypt using his civil servants and officials in each region. As a result, Thebes gradually became the administrative hub of ancient Egypt in addition to it being the religious hub.

Thebes being situated in the middle of Egypt meant that Ahmose I had enough buffer zone to fend off possible attack from the Nubians in the south as well as the Hyksos to the north.

Pharaoh Ahmose I revived the construction of pyramids in Egypt 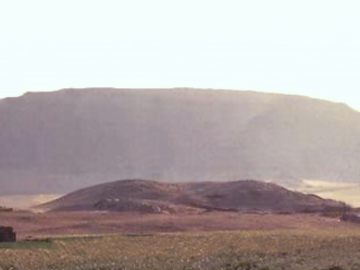 Ahmose I revived construction of pyramids relying on architectural style of both Old and Middle kingdom pyramids.

The end of the Middle Kingdom in the 18th century BC resulted in the decline of pyramid construction in Egypt. During Hyksos rule, pyramid construction ground to a halt. Upon becoming ruler of all of Egypt, Ahmose I committed himself to rebuilding the pyramids of previous Egyptian kings and queens, especially the ones in Thebes.

Ahmose also committed a lot of resources to building his pyramid in Abydos. Some scholars state that the pyramid was in fact a cenotaph, i.e. a pyramid not meant to house the remains of a dead person. Egyptologists who stick with this notion state that Ahmose was laid to rest in a tomb south of Dra’Abu el-Nga’. However, there is no evidence as of today to either support or refute those claims.

Long destroyed by the passage of time, the ruins of Ahmose Pyramid measure about 10 m tall today. However, when it was first built, it may have reached a height of about 40 m (130 ft). Beside his pyramid, he constructed a cenotaph pyramid for Queen Tetisheri, his grandmother. At the base of the ruins, archaeologist unearthed a bit of evidence to show that there was a thriving cult of Ahmose I in the city of Thebes.

Examples of the massive constructions works that Ahmose I undertook

King Ahmose I spent enormous amount of resources in putting up magnificent building and temples all across Thebes and across Egypt in general.

It’s been said that he had a strong nostalgia for art forms and construction projects that existed before the Second Intermediate Period (c. 1650-1550 BC), which is also known as the Hyksos era. The king would go on a construction spree, erecting many temples and palaces similar to the ones seen during the Middle Kingdom era.

He made improvements to the temple of Amun at Karnak and the temple of the falcon-god of war Montu at Armant. From the stones quarried at Tura, he constructed a magnificent temple in honor of the god Ptah, the Egyptian god of craftsmen.

Ahmose I purposely sited many of his construction projects on top of former Hyksos buildings. For example, he razed to ground Hyksos fortifications in Avaris and then built his magnificent palace.