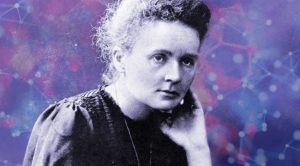 Marie Curie was a female scientist from Poland who won Nobel Prizes in chemistry and physics. Her scientific career kicked off in France when she got married to a French scientist, Pierre Curie. The couple jointly won the 1903 physics Nobel Prize, for their research work on radioactivity.

They also discovered the chemical elements, polonium, and radium. After her husband’s death, Mrs. Curie intensified her scientific research and broadened the scopes of medicine and radioactivity. Rising above all odds, Marie Curie holds the record as the first female scientist to win Nobel Prizes in different scientific fields. The following are some interesting facts about Marie Curie.

Marie Curie Did Not Know Anything about the Dangers of Radioactivity

Marie and her husband were experts who enlightened the scientific community with groundbreaking discoveries about radioactivity. However, the two radioactivity heroes were completely oblivious of the dangers associated with long time exposure to radioactive substances.

At that time, little knowledge about the effects of ionizing radiations was available. History recalls that Marie Curie used to handle radium with her bare hands. Ironically, she slept in her bedroom with radioactive materials. Because of the shining properties of radium, Marie Curie kept it close to her bed and used it as a source of light.  On the other hand, it has been reported that her husband Pierre experimented on the heating effects of radium, by tying a radium sample to his bare hand for close to 10 hours. Also, he used to keep some in his pocket.

Towards the latter part of their lives, Pierre Curie and his wife exhibited weird physical disorders – they both began to have shaky hands and abnormal fingers. Curie died in 1934, as a result of her work.

One of the Curies’ Daughters (Irene) also Won a Nobel Prize 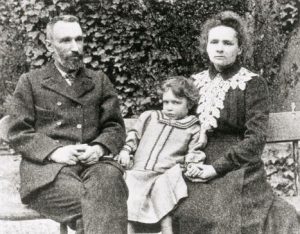 Marie and Pierre Curie together with their daughter, Irene Curie. Image source: Sciencephoto.com

Globally, a Nobel Prize represents the highest award that can be given for a scientific accomplishment. During her lifetime, Marie Curie won the prestigious award on two occasions. Their daughter Irene Curie was only 6-years-old when the couple won the 1903 Nobel Prize. Irene got fascinated with her parent’s scientific achievements. So, she decided to follow suit in scientific research.

When she grew up, Irene studied science and obtained her PhD. in 1925. During World War I, she worked closely with her mum to treat wounded soldiers, using x-ray machines. Irene took much interest in the study of radioactivity. A decade later, Irene and Frederic Joliot won a Chemistry Nobel Prize. The award was meant to recognize their successful synthesis of brand new radioactive elements. To add up fame to the Curie family line, Frederic and Irene’s two children also became renowned scientists. Unfortunately, Marie and Pierre Curie didn’t live long enough to see the science gurus they had nurtured in the family.

The famous German-born U.S physicist Albert Einstein was a longtime admirer of the scientific works of Marie Curie. When the widowed Curie became the subject of a relationship scandal in Paris, Albert Einstein stepped in to support her during her trying times of pain and disapproval. Einstein and Curie met at Belgium in 1911, for a physics conference.

Around that time, Marie Curie was rumored to have engaged in a romantic affair with a fellow scientist, Paul Langevin. Langevin was a former student of Curie’s husband, Pierre. The French media went crazy and vilified Marie Curie, calling her all sorts of names. This became a troubling time for Marie Curie. Fortunately, Einstein wrote a letter and comforted Marie Curie.

She Was a Victim of Gender Discrimination

At her time, the capabilities of female brains were underrated. Even though she was a brilliant student, Marie Curie struggled to gain admission to Polish universities. There was mass discrimination towards women in every corner. When she established her famed scientific career in France, Marie Curie was still a victim of gender discrimination. In spite of that, she was the brain behind the couple’s Nobel Prize-winning radioactivity research work in 1903. This made Marie enter into history as the first woman to ever receive a Nobel Prize. Her feminine ability was well defended when she won her second Nobel Prize in 1911, in Chemistry. There are allegations that Marie Curie’s name was initially dropped from the 1903 Nobel Prize nomination list.

She did not Patent Her Scientific Discoveries

It’s highly inconceivable that a scientist would refuse to make financial gains from his/her discoveries, after toiling in a laboratory and handling life-threatening substances. Believe it or not, that was what the selfless Marie Curie did. When she discovered radium, it was a big opportunity for her to patent her brainchild and make money from it. In an interesting display of generosity, Marie and her husband openly shared their discoveries with industrial experts.

Radium became a valuable raw material for factories. By 1920, a one kg mass of radium shot up to about $100k. The expensiveness of the element crippled Curie’s ability to buy enough of it for her experiments. She could no longer buy her own discovery as much as she wanted.

She came from a very weak Financial Background

Marie Curie rose from humble beginnings to achieve greater heights in science. Her parents were teachers who did not have resources to cater to her educational needs. At a point in time, Marie Curie endured hunger while studying at the university. She lived on a poor diet of bread and tea. Marie Curie’s poverty-stricken student life continues to inspire current students to chase their dreams, despite the lack of money.

She was not a Believer in God

Marie Curie’s religious identity is described as agnostic. Her dad was a person who disbelieved in the existence of God; an atheist. However, her mum who was a committed Christian. Marie lost faith in God when her sister and mum died. She ditched religion and declared her stance as agnostic (one who was unsure of the existence of God).