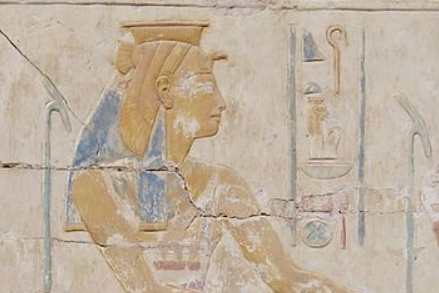 In Egyptian mythology and religion, Heqet (Heket) is the goddess of fertility. She was revered as the consort of Khnum, the Divine Potter who molded the bodies of human beings.

As Heqet was the goddess of fertility, she was usually depicted with the head of a frog. Frogs were associated with fertility in ancient Egypt.

The goddess Heqet was primarily associated with deities like Hathor and Khnum. In some accounts, the union between Heqet and Khnum brought forth the god Her-ur, who is also known as Horus. Unlike other major Egyptian deities that had widespread worship and cult, Heqet was a relatively minor deity.

Below is quick look at the various myths about the origin story, powers, symbols, and depictions of Heqet.

Epithets: She who hastens the birth

Origin story and meaning of Heqet

Heqet’s name was associated with the word “frog” or “egg”. Both of those words reinforce her role as a fertility goddess. Other scholars have also stated the word “heqa” means “scepter” or “ruler”.

There is not much that is known about her origin story other than she is the consort of Khnum, the Divine Potter who molds the bodies of children out of clay. Heqet was also associated with the sky goddess Hathor. In that depiction, she is seen as the mother of Horus the elder.

Starting right from the early dynastic period, frog statuettes were used to depict the goddess Heqet.  In other cases, she was shown as an elegantly dressed woman with the head of a frog.

In her hands, she can be seen wielding the ankh, a scepter, or a knife. Some people believed that she wielded a knife in order to cut the umbilical cord during childbirth. She also needed the knife to severe the ties that held a deceased person to the land of the living.

Ancient Egyptians associated frogs with abundance and fertility. This explains why Heqet was depicted with the frog symbol | Image: Early Dynastic Period (c. 3100 BC) frog statuette in the Cleveland Museum of Art

Women seeking to conceive prayed to fertility deities like Heqet. It’s been said that in addition to that particular role, Heqet was responsible for breathing the breath of life into the new born baby. According to the myths, she did this exact thing during the birth of Horus, the falcon-headed sky god.

As it was common for Egyptian deities to evolve and take on additional responsibilities, Heqet would later become associated with resurrection in the afterlife.

Ancient Egyptian goddess Heqet, goddess of fertility | The god Khnum, aided by his wife Heqet, molds the Egyptian god Ihy in a relief in the Dendera Temple complex, Dendera, Egypt

A number of Egyptian myths state that Heqet was the wife of Khnum. The two deities partnered to create human beings. Khnum would mold the human bodies with clay (from the Nile) at his potter’s wheel, while Heqet will use her magic (heka) and then breathe life (the ka) into the molded body before it is put in the mother’s womb.

In the famous Queen Hatshepsut Mortuary Temple at Deir el Bahri, both Heqet and Khnum appear standing beside the infant Egyptian queen.

Why was Heqet associated with frogs?

Perhaps due to the frogs that came during the annual flooding of the Nile River, ancient Egyptians started to associate frogs with rejuvenation and birth. The flooding was an important time for the land of Egypt as it deposited highly nutritious silt and other sediments on the lands. That in turn allowed farmers to begin the planting season. Ancient Egyptians believed that the flooding of the Nile was the gods’ way of making the land of Egypt fertile.

Heqet’s association with Horus explains why there was a temple (situated in the ancient Egyptian city of Qus) in honor of both of them during the Ptolemaic Period (305 BC-30 BC).

She was worshiped for her efforts during the final stage of the flooding of the Nile. That period often coincided with the growth of corn.

Since the flooding of the Nile symbolized rebirth and revitalization, Heqet came to be associated with the final trimester of pregnancy. Beginning around the Middle Kingdom, she even earned the epithet “She who hastens the birth”.

At some point in ancient Egypt’s history, people began to see midwives as the servants or agents of Heqet.

There is an anthropomorphic depiction of the goddess Heqet in Rameses II’s temple in Abydos.

Other variations of her name include Heket and Heqat.

In ancient Egypt, expectant mothers were encouraged to wear amulets and necklaces of Heqet in order to receive the protection of the goddess.

It was also not uncommon for her images to appear on household items like furniture, knives and perfume jars. It was believed that she could use her power to scare away evil forces that sought to harm the child or mother.

The Pyramid Texts, a text from the Old Kingdom era, praises her for role in helping a deceased pharaoh make his/her way into the afterlife. It was therefore not uncommon for amulets shaped like frogs to be placed in the coffin of the dead. Egyptians believed that Heqet would facilitate the rebirth process in the afterlife.

There have been some scholars that have proposed that Heqet’s name influenced the name of Hecate, an ancient Greek goddess of witchcraft, magic and sorcery.