He was called the “Philosopher-King” due to his interest in the arts, science, and music. Frederick the Great built a formidable army and led his Prussian kingdom from a poor state surrounded by enemies to a dominant power in Europe in the nineteenth century.

Growing up as a timid child living under the shadow of his authoritarian father, Fredrick the Great cemented his name in history as an honorable and anti-Machiavellian monarch who reigned over Prussia for forty-six years.

He was romanticized and idolized as an outstanding military leader by many, including Napoleon and infamous German leader Adolf Hitler. The latter’s misplaced reverence of Frederick caused the Prussian king’s history to be consciously forgotten among the allied countries, least it inspires the emergence of another German tyrant.

However, no matter your leaning, one cannot deny Frederick the Great was a capable monarch as his reign turned Prussia into a hub of enlightenment and culture.

But just how great was Frederick II of Prussia? What were some of the major reforms he instituted to transform Prussia into a force to be reckoned with in not just Europe but across the world?

Below, WHE explores the life and notable achievements of Frederick, one of the most enlightened monarchs in modern history. 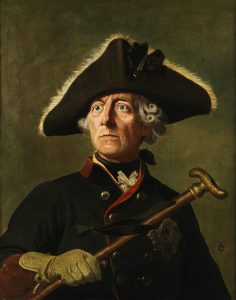 Frederick was born to the Crown Prince Frederick William of Prussia in the Berlin City Palace in 1712. He was often beaten and humiliated by his father for his keen interest in arts and music, as his father considered these interests effeminate.

In 1730, Frederick tried to escape his abusive father. The young prince made arrangements to flee to his maternal grandfather, King George I of England.

However, the plan was leaked to Frederick William who imprisoned his son. His alleged collaborator Hans Hermann von Katte, a Prussian officer, was also imprisoned and charged with treason.

The young Frederick was forced to watch the execution of his friend Katte who was beheaded on November 6, 1730. Two years later, he was forced to marry Elisabeth Christine von Braunschweig-Bevern as a condition to regain his freedom and title. It is reported he lamented to his sister, “There can be neither love nor friendship between us.” His lack of interest in women was well known, causing many to question his sexuality.

Reign of Frederick the Great

Frederick II came to the throne on May 31, 1740, at the age of 28. Having inherited a highly militarized and vast army, he immediately launched an unprovoked attack against Austria and annexed the region of Silesia. This campaign provided substantial long-term economic and strategic benefits to Prussia. It also  led to the War of the Austrian Succession, lasting eight years. The war ended with The Treaty of Dresden, which finally established Prussian rule in Silesia. Frederick then came to be known “Frederick the Great”.

His military conquest and expansionist policies resulted in Prussia making more enemies in Europe, who saw Prussia as a rising threat. In 1756, Austria signed an alliance with France and Russia to crush the fast-rising kingdom. 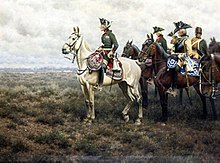 Frederick II of Prussia personally led his forces into the battle at Leuthen where he defeated an Austrian army twice his own, earning himself a reputation for bravery and tactical brilliance.

As a result, Frederick launched a preemptive attack on Austria’s ally, Saxony, with an army of 50,000 troops. The Prussian king personally led his forces into the battle at Leuthen, where he defeated an army twice his own, earning himself a reputation for bravery and genius commander.

The Seven Years’ War led to a stalemate until Russia withdrew from their alliance with Austria in 1762. That event came to be known as the “Miracle of the House of Brandenburg.” The war officially ended in 1763 with Britain emerging as a world power and Prussia becoming a dominant force in Europe.

Frederick the Great believed he was the first servant of the state, and acting on this, he increased the freedom of speech in the press and literature, abolished judicial torture, and reduced the number of crimes punishable by death.

He reformed the judiciary and removed special courts for the upper classes, a law that was later called the Prussian Law Code of 1794. The ruler of Prussia promoted trade with other countries like China and lowered import duties and built canals to encourage trade. He established a porcelain factory, now known as Royal Porcelain Manufactory Berlin or KPM

The king was instrumental in the development of Berlin as a cultural capital, elevating it to a status similar to Paris and London. He constructed the Berlin State Opera, the Royal Library (today the Staatsbibliothek Zu Berlin), St. Hedwig’s Cathedral, the French and German Cathedrals on the Gendarmenmarkt, and Prince Henry’s Palace (now the site of Humboldt University).

During his reign, the civil service was reformed and he reorganized the Prussian government into separate ministries to allow rational division of tasks and easy executive control.

Frederick II promoted religious tolerance and encouraged immigration by repeatedly emphasizing that nationality and faith were of no concern to him. This allowed Prussia’s population to recover quickly from its considerable losses during Frederick’s three wars. However, he was less tolerant of Catholicism in his occupied regions, he confiscated the Roman Catholic Church’s properties, and made clergies dependent on the state for their income.

He was famed for his interest in the arts. It’s said that he retreated to Rheinsberg Palace to read and write philosophical works like “The Works of a Sans-Souci Philosopher.”

In addition to German, Federick spoke French, English, Spanish, Portuguese, and Italian. French was Frederick’s preferred language for speaking and writing. Even though he disliked his mother tongue German, he maintained the language as his working language with his administration and with the army. He also sponsored the Royal German Society. Founded in Königsberg in 1741, the aim of the society was to promote and develop the German language.

Frederick the Great took great interest in the collection of paintings and ancient sculptures. His love for the arts can be seen in the picture gallery at Sanssouci in Potsdam.

In 1741, he reinstituted the Prussian Academy of Sciences (Berlin Academy) after it had been closed by his father for a number of years. Frederick invited several intellectuals from across Europe to join the academy.

Why was Frederick II great?

The German leader Adolf Hitler certainly drew immense inspiration from the works of his hero, Frederick the Great. However, comparing Frederick the Great and his Prussian nation to Hitler and the Nazi regime would undoubtedly be a insult to history.

Frederick the Great was was anything but a prototype of Hitler. The Prussian king was a philosopher king who promoted tolerance and ended censorship. His comprehensive law code firmly established the principle that the king and government were bound by law.

Having taken the famous French philosopher Voltaire as his intellectual mentor, Frederick practiced a virtuous kind of kingship. He emphasized the importance of sustaining the welfare of the state as well as enhancing the happiness of his subjects. To Frederick, a monarch should be capable of inspiring confidence through wisdom.

His anti-Machiavellian rule on kingship is the reason why he was able to leave an indelible mark on all spheres of his country, from military, education, trade to religion.

Militarily, his leadership can be placed up there among the greatest commanders of all time, including Alexander the Great, Julius Caesar, and Napoleon. The latter for example took immense inspiration from Frederick’s famous victory against the Austrian army at the Battle of Leuthen in December 1757.

How did Frederick the Great die?

Frederick was loved and popular among the Prussian people because of his reforms and military victories. He was cheered “Der Alte Fritz” (The Old Fritz) whenever he was on the street. 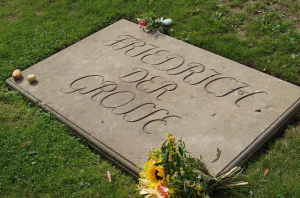 On 17 August 1786, the third king of Prussia died in an armchair in his study at his summer house, Sanssouci. He was 74. He was buried next to his father, Frederick William I, in the Potsdam Garrison Church. His inability to have any children meant that his nephew Frederick William II  succeeded him to the throne.

Frederick strongly believed a prince “is merely the principal servant of the State”. Unlike his contemporaries, he did not believe in the Divine Right of the King. The following are some other interesting facts about the Prussian king: