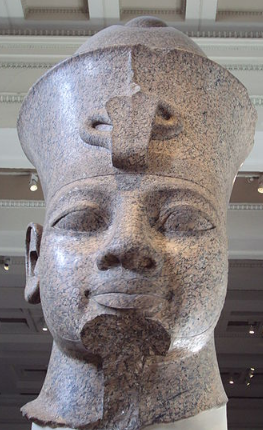 Amenhotep III was king of ancient Egypt from about 1390 BC to 1353 BC. His reign coincided with an era of growth, stability and general peace. A son of Pharaoh Thutmose IV, Amenhotep III is most famous for developing peaceful relations with Egypt’s neighbors, including the Nubians in the south.

Below is a quick look at the history, family, reign and major accomplishments of Amenhotep III, an 18th Dynasty Egyptian pharaoh.

Pharaoh Amenhotep III was born in early 15th century BC to ancient Egyptian monarchs Thutmose IV and Mutemwiya He traces his roots to Egyptian monarchs that hailed from the Thutmosid family – a powerful family that ruled Egypt for about a century and a half, starting with Thutmose I (reign  – 1506-1493).

Some historians have stated that his father Thutmose IV became king after overthrowing his older brother. His father is most remembered for renovating the Great Sphinx of Giza and the commissioning of the Dream Stele.

Amenhotep III’s mother, Mutemwiya, was a minor wife of Thutmose IV. The ‘mut’ in her name comes from the ancient Egyptian mother goddess Mut. She was an astute royal who probably acted the regent during the minority period of her son Amenhotep III. There have been some claims that she was the daughter of Artama I of Mitanni. In some accounts, she is seen as the sister of Yuya, an influential nobleman and courtier of the 18th Dynasty. If that account was true, then she is the aunt of Tiye, Amenhotep III’s Great royal Wife. 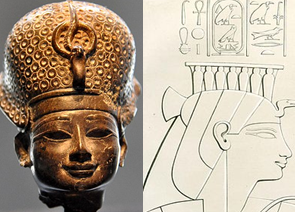 Shortly after inheriting the Egyptian throne from his deceased father Thutmose IV, he married a woman called Tiye, a woman of noble birth and the daughter of Yuya and Tuya.

Another likely male child of Amenhotep III was Smenkhkare, a possible successor of Akhenaten during the the Armana Period of the 18th Dynasty – succeeded Akhenaten. Smenkhkare likely married Meritaten, the daughter of Akhenaten.

Amenhotep had at least four daughters – Iset, Sitamun, Henuttaneb, and Nebetah. Often times those daughters of his were displayed standing in front of him, as we seen in the colossal statue of Amenhotep III and Queen Tiye. Two of his daughters – likely Iset and Sitamun – were elevated to great royal wife in his later years on the throne. This was in keeping up with the general religious beliefs of ancient Egypt as could be seen between the relationship between the sun god Ra and the goddess Hathor. Following the elevation of the sun god Ra to supreme deity of the Egyptian pantheon, Hathor, who was formerly his mother, became his wife, or in some cases his daughter.

Archaeologists estimate that Amenhotep III became king of Egypt between the ages of 6 and 12. What this means is that he succeeded his father Thutmose IV when was still a young boy. It’s been said that a regent was appointed to rule during his minority years.

Amenhotep III’s reign was one of stability and peace. To be precise it was an uneventful one in terms of foreign conquests and wars. With the exclusion of his military campaigns in Nubia, near Aswan and Sai, Amenhotep pursued peace with many of his neighbors.

As a result of the relative peace he enjoyed during his reign, he was able to pursue a number of projects. The following are some major achievements of Amenhotep III.

It’s been proposed that he suffered from arthritis in his old age. Some examinations also revealed that he may have been obese in his old age. Most importantly, reliefs from the tomb walls of Kheruef, Steward of the King’s Great Wife, shows Amenhotep III weak and sick.

Some Egyptologists have claimed that his father-in-law Tushratta of Mitanni sent him statue of Ishtar of Nineveh – a healing goddess – to cure his myriad health problems, which included teeth problems. However, some scholars begged to differ. They claim that the statues of Nineveh were sent by Tushratta to invoke blessings of the goddess on the marriage between Pharaoh Amenhotep III and Tadukhepa, daughter of Tushratta.

After reigning for about 38 years, Amenhotep III succumb to his illness and died. He was survived by his son Akhenaten, his Great Wife Tiye and a number of other wives and children. Queen Tiye outlived him by about 12 years.

It is possible there existed a co-regency between Amenhotep III and his son Akhenaten. According to the Egyptian Ministry for Antiquities, the regency lasted for at least 8 years.

Amenhotep III turned down Babylonian king Kadashman-Enlil’s marriage proposal to one of his daughters. It’s been said that he refused to the marriage request because he wanted to keep the blood line and line of succession intact and free of foreign blood. Some scholars state that his rejection of the marriage proposal was his way of trying to exert his importance over the Babylonian king.

From the examinations of Amenhotep III’s mummy, scientists estimate that he was between 40 and 50 years old when he died. That will mean he died in his 38th or 39th year on the throne.

The mummy of Amenhotep III was given the utmost reverence befitting an Egyptian king. His body was buried in a tomb at the western valley of the Valley of the Kings – Tomb WV22. However, around the Third Intermediate Period, his mummy was moved to a nearby chamber (KV35), where he shared it with other pharaohs of the 18th and 19th dynasties. The mummy would remain there until it was discovered by French Egyptologist Victor Loret in 1898.

Amenhotep III is remembered for ruling over an Egypt that was at peace with many of its neighbors. His reign coincided with a period that saw Egypt reach very high heights. The king also had tremendous amount of influence in the region as the country’s economy was thriving.

He is also remembered for upholding the traditional religious structures, which were presided over by the Priests of Amun. With Amun as the chief of the Egyptian pantheon, the priest of Amun enjoyed a lot of economic and religious power. In some cases their power even rivaled the Egyptian kings.

Unfortunately, Amenhotep III reinforcement of Amun’s worship was undone by during his successor’s rule. That is. Akhenaten’s religious reforms sought to clip the economic and religious power of the priests of Amun. He did this by suppressing the worship of Amun. In Amun’s place, the sun god Aten rose to prominence. A new Egyptian capital, Amarna (‘Horizon of Aten’) was built in honor of Aten.

Amenhotep III and Sobek, from Dahamsha, now in the Luxor Museum, Egypt

In April 2021, Amenhotep III’s mummy was one of many ancient Egyptian mummies that was moved from the Museum of Egyptian Antiquities to the National Museum of Egyptian Civilization. All in all, mummies of eighteen Egyptian kings and four Egyptian queens were moved.