About the Goddess Wosret of Ancient Egypt 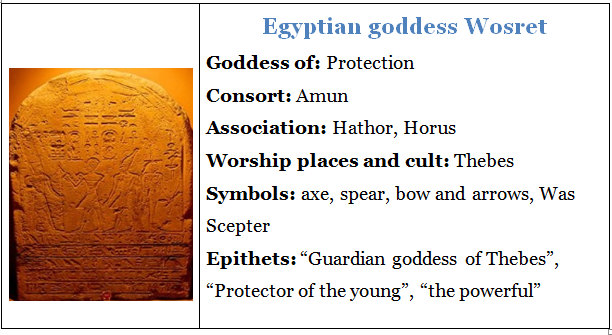 Did you know that Egyptian goddess Wosret was revered as the first wife of the creator god Amun? Continue reading to learn more about the history, myths and powers of Wosret, a lesser known Egyptian deity.

Due to the reverence given to the goddess Wosret by the ancient Egyptians, it’s been said that her name translates to “the powerful”.

Worship of the ancient Egyptian goddess Wosret was prevalent in the Upper Egyptian city of Thebes. There she was worshiped alongside other Theban deities like her husband Amun, Khonsu and Mut.

Although not a major deity like Isis or say Hathor, she was still much beloved and renowned among ancient Egyptians. It was believed that her name in itself evoked the meaning of power. This meant that she was the kind of deity not to be trifled with as she could unleash high doses of fury on people who transgressed against her or other Egyptian gods.

Egyptian goddess and the 12th Dynasty pharaohs of Egypt

It’s been shown that Wosret gained immense worship during the reigns of some 12th Dynasty pharaohs of Egypt (BC 1991 – Bc 1804). Pharaoh Senwosret’s (also known as Senusret) associated himself with the goddess Wosret. His name could translate to “man of Wosret” or “son of Wosret”.In addition to Senwosret, other Middle Kingdom pharaohs of that period credited the relative stability and peace of the dynasty to the divine works of the goddess. 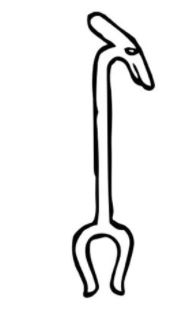 Was Scepter | One of Wosret’s commonest symbols was the ancient Egyptian Was scepter, a symbol of power and dominion

As a minor ancient Egyptian deity, she was hardly depicted. If there were many depictions of her, so far archaeologists have yet to come across them. Similarly, researchers are still yet to uncover any temple built in honor of her.

Read More: Meaning and significance of the Was Scepter and 12 other ancient Egyptian symbols

It’s been noted that ancient Egyptians generally depicted her donning a tall Egyptian crown, a symbolism of her power over the land. That symbol was also reinforced by the was scepter that she wielded. Ancient Egyptians believed that the scepter, which appeared in many Egyptian arts, hieroglyphics and other relics, symbolized the power and dominion. This explains why it was often associated with many Egyptian gods and pharaohs.

The bow and arrows and spears that she wielded perfectly communicate her fierce nature.