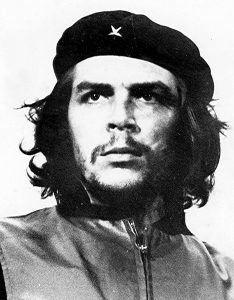 Che Guevara was an Argentine-born Marxist revolutionary who worked closely with Fidel Castro to overthrow the Cuban government under President Fulgencio Batista. In his efforts to spread communism to other countries, Guevara was captured and killed in Bolivia. Here are 10 interesting facts about Ernesto “Che” Guevara:

Che Guevara was an asthmatic patient. This partly motivated him to pursue medicine and eventually become a doctor. He obtained his medicine degree in 1953 at the Buenos Aires University. From then onward, the path that he took was one that would be filled with instigating and fighting exploitative capitalist regimes all across South America.

His Motorcycle Adventure prompted him to act

It took trips across South America for Che Guevara to respond to his revolutionary calling. While he traveled as a student, each mile of the journey made him witness the intense sufferings and deep cracks in the political and economic systems of most South American countries. He decided that it was time for him to fight for change. Accounts of his motorcycle adventure was published in The Motorcycle Diaries – a written memoir by Ernesto “Che” Guevara. 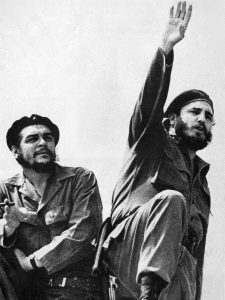 A significant part of Guevara’s fame came from his revolutionary actions with Fidel Castro and Raul Castro in Cuba. However, Guevara also influenced revolts in Congo (in Central Africa) and Bolivia. In 1964, he delivered a fiery United Nations’ (U.N.)speech which was very critical of the U.N. as well as the prevailing racial problems in the U.S.

Although, Che had become a thorn in the flesh of several American officials, the United States simply did not see his death coming that after he was captured. Rather, they wanted to question him, at the least extradite him or something. However, the Bolivian regime saw it fit to kill him. The Bolivian officials were afraid that sparing his life and putting him on trial will only make him win sympathy from the public. Therefore, the order came in, Che Guevara had to die. The soldiers that took him prisoner make it look like he was caught in severe cross fire with government forces.

He was responsible for the deaths of loads of People

Che Guevara was not entirely a saint. During the course of his life he did get his hands dirty. But then, how many political revolutions in the course of human history have come without the shedding of blood? The simple answer: None! Guevara’s full time career was causing political revolts which claimed lives. After they collectively took control of Cuba, Castro made him a commander in charge of “La Cabana Fortress prison”. It is believed that he ordered the killings of around 156-550 people.

He was once the President of National Bank of Cuba

Yes, Guevara served as the governor of a central bank! It was certainly interesting- a doctor, turned guerrilla fighter, running the monetary and financial decisions of a country. Guevara headed the “National Bank of Cuba” before getting his ministerial position over Industries. He fostered trade with other countries such as the Soviet Union and America.

Guevara’s character-packed life has been the subject of many political history books. Films “Motorcycle Diaries (2004)” and the 2008 movie Che: Part One revolved around his life-changing adventures. Famous books such as Che: A Revolutionary Life by John Lee Anderson, and “The death of Che Guevara” Jay Cantor shed significant light on the life and revolutionary exploits of Che Guevara. Across the world, he is revered as an iconic figure of every revolution that takes place. His message of giving power to people, regardless of the cost, continues to resonate in hearts and minds of people that are itching to topple oppressive political and economic systems around the world.

His last words were as remarkable as his life

A day after his arrest, Guevara would taste a hot death. He uttered his last words to Sergeant Jaime Terán who was asked to shoot him. Before fire was opened on him, Guevara reportedly said that, he was aware that he was going to be shot. However, they were only killing a real man.

Che married twice; the women were Hilda Gadea (in 1955) and Aleida March (1959). The revolutionary leader was survived by his two sons and three daughters.

After his death, Bolivian army officers placed his body on top of a sink in a hospital laundry.  On October 10, 1967, his body was displayed in the village of Vallegrande, Bolivia. The media were then allowed to take photographic shots of the murdered hero (or villain, depending on how you would like to see him).

“Che” was his nickname

In colloquial Spanish usage (typically in Argentina), “Che” is an exclamatory word meaning “dude” or “mate”. “Che” in some cases can mean a close-knit friend or brother.  Ernesto Guevara was nicknamed “Che” because Guevara frequently used it with his comrades. He considered those who fought by his side ‘Che’.

To this day, Ernesto “Che” Guevara’s mortal remains have not been found

The U.S. CIA (the Central Intelligence Agency) was part of the jungle capture of Guevara near La Higuera, Bolivia. He was there to cause political troubles and kick start a similar revolution as he successful did in Cuba. However, his luck ran out when some of the locales, fearing that their town could soon be under siege from the central government, revealed his hiding place.

After close three years in hiding, he was apprehended on October 8, 1967. and was executed following a presidential order from the Bolivians. The man responsible for issuing the final order to the soldiers was Félix Rodríguez – Cuban American CIA operative.

Che’s  hands were cut off from his body to serve as evidence. It is believed that his body was secretly dumped into a mass grave of fallen guerrilla fighters.  28 years later, a Bolivian general disclosed his burial location, prompting a body hunt.