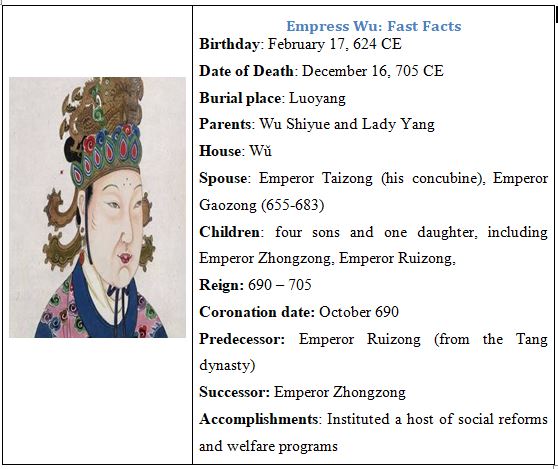 Empress Wu Zetian was the daughter of a relatively senior government official in ancient China. Owing to this fact, many of the royal court old guards fought tooth and nail to prevent her from becoming empress of China. Regardless of those opposition groups, the empress stood firm, eliminating her enemies one by one, until she became the overall ruler of China.

As Empress regnant (huangdi, which means “emperor” or “empress regnant”), Wu Zetian maintained a firm grip on the empire, keeping it very united and vibrant. She also instituted a number of social and political reforms that moved China into a meritorious bureaucracy.

Due to quite a lot of prejudice (mixed with sexism) on the part of some Chinese historians and the establishment in general, Empress Wu Zetian at some point tended to be only remembered for the ruthless approach she used in crushing her opponents. However, there is more to Wu Zetian than those unsavory power-grabbing techniques.

Get to know about the birth story, family, reign, and other important facts about Empress Wu, China’s only female monarch.

Wu Zetian’s parents were not from the upper aristocratic society; however her father was a senior government official who also owned a timber business. Her mother Lady Yang hailed from the very powerful and affluent Yang family.

Growing up, her family paid particular attention to her education, encouraging the young Wu to read as many books as possible. All of that training and education culminated in transforming Wu into the bright young lady that she later became.

Imperial concubine of Emperor Taizong of the Tang dynasty

Wu started her journey to the top when at just age 14 she was selected by Emperor Taizong to be his junior palace concubine – a position she served until Taizong’s death in 649. While in the court of the emperor, she served as a secretary. This position of hers allowed her to abreast herself with current matters, court politics and diplomacy – subjects that would prove very useful when she came of age.

Right from when she entered the palace as the concubine of Emperor Taizong, she harbored ambitions of one day becoming the chief consort of the emperor of China. Before she left home, she remarked that it was her “fortune to meet the Son of Heaven” (i.e. Emperor of China).

Following Taizong’s death, Li Zhi – the deceased emperor’s youngest son – was crowned Emperor Gaozong of Tang. Fancying Wu Zetian, the new emperor brought Wu from a Buddhist convent (Ganye Temple) to his court to make her his favorite concubine. It was rumored that Wu and Gaozong had a romantic relationship when Taizong was still on the throne.

Bent on cementing her status as the emperor’s most senior concubine, Wu Zetian used less than seven years to cunningly exile or kill all her palace rivals and other senior concubines. She became Emperor Gaozong’s most trusted confident; she bore five children for the emperor – four boys and a girl.

Still feeling threatened by the old palace advisors and officials, Wu meticulously drove out anyone that spoke ill of her position of empress. Much of the opposition came from senior aristocratic officials like the emperor’s uncle, who thought that emperor was committing incest by bedding with his predecessor’s concubine. Wu made sure that those that opposed her, as well as their family members, were either killed or exiled. Steadily she consolidated her power in Emperor Gaozong’s court and rose to the title of Zhaoyi, the highest ranking concubine of the emperor.

As Emperor Gaozong became more ill and frail in last two decades on the throne, Empress Wu’s power increased to the point where she was in effect the de facto ruler of China. She held supreme power in the empire, deciding on civil and military matters of the empire. The emperor was really fond of her and even gave her full control of the emperor’s Imperial Seal (also known as the Heirloom Seal of the Realm).

Although she worked tirelessly to unite China, as well as rule the empire with very great efficiency, she still relentlessly and ruthlessly got raid off every palace element that sought to usurp her from her position.

Empress Wu was praised for her sound decision making that transformed and united China. She instituted several reforms that moved the empire from one based on military and political aristocracy to one based on bureaucratic system of administration. She was described a very competent administrator who showed nerves of steel when dealing with opponents that threatened her court or the stability of China. She also effectively managed China’s war efforts as the empire vanquished Korea.

How Empress Wu deposed her sons Emperors Zhongzong and Ruizong

After the death of Wu’s husband Emperor Gaozong in 683, Wu’s son Zhongzong was crowned emperor. Emperor Gaozong’s reign was marred by a lot of rivalry between his wife (of the Wei family) and his mother Empress Wu. In a similar fashion as she eliminated her husband’s advisors, Empress Wu clipped the wings of the new emperor and his wife, Empress Wei. In less than one month of Zhongzong’s reign, Empress Wu had amassed enough power to depose Zhongzong and crown her third son Li Dan (born 662 – died 716) as the new emperor of China.

Known as Emperor Ruizong, Li Dan was merely a puppet emperor, dancing to the tune of his mother Empress Wu. By this time, she made it no secret of who the real power behind the throne. She presided over all meetings – both civil and military. She prevented Emperor Ruizong from using the imperial quarters.

In spite of the carefully orchestrated revolt by some devout Tang loyalists (led by Li Jingye) to bring back deposed emperor Zhongzong to the throne, Empress Wu remained very popular both in the palace and the public. With unconditional support from top brass and commanders of the army, she was able to swiftly extinguish the flames of the revolt before it spread to other parts of the country.

Empress Wuhou’s thirst for power did not end with the overthrow of her first son. Six years into Emperor Ruizong’s reign, she overthrew him and crowned herself empress of China – China’s first ruling female monarch. By then Empress Wuhou, 65, had either killed or exiled every remnant of opposition from the empire.

She in effect had more political power than Emperor Gaozong, this was due to her sound political acumen and the Emperor’s worsening health. 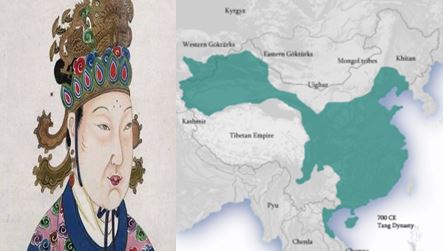 It has been estimated that Empress Wu sat on the throne for about a decade and a half. Her first point of call was to change the ruling dynasty’s name from Tang to Zhou. There growing suspicion that she tried to side line the Tang succession line and her own children in favour of her nephews, thereby moving the succession line from Tang to her family Zhou. However, that never materialized because none of her nephews or their children was popular or considered capable enough to run an entire empire.

Additionally, Empress Wu spent a considerable amount of time and effort patching things up with her oldest son Zhongzong and his family. In 698, she brought Zhongzong back to the palace and elevated him to the position of crown prince. From then onward she made sure that she retained all the power, ruling as any other effective Chinese emperor did in the past.

During her reign she came to increasingly rely on the counsel and companionship of the Zhang brothers – Zhang Yizhi and Zhang Changzong. The Zhang family were very artistically educated people who used charm to wiggle their way into the heart of Empress Wu. As a result, other senior courtiers and traditional advisors of Wu loathed the Zhang brothers. Wu responded brutally to anyone that tried to warn her about the Zhang brothers.

In her last few years on the throne, she grew very ill and frail. By 704, her illness had worsened to the extent that only her trusted advisors – the Zhang brothers – were given permission to visit her. The power-hungry senior officials and army generals – most of who were supporters of Zhongzong – capitalized on Wu’s ill health and forced her to hand power over to son Li Xian (Zhongzong) in February 705. The generals also killed the Zhang brothers (Zhang Yizhi and Zhang Changzong), accusing them of treason.

Physically and mentally exhausted, the ailing empress moved out of the palace and spent the remainder of life quietly at another palace. Empress Wu Zetian died at the age of 81 on December 16, 705. Empress Wu was laid to rest in a very beautiful tomb located about 50 miles north of Xi’an.

Other interesting facts about Empress Wu