Who was Queen Victoria’s Mother? 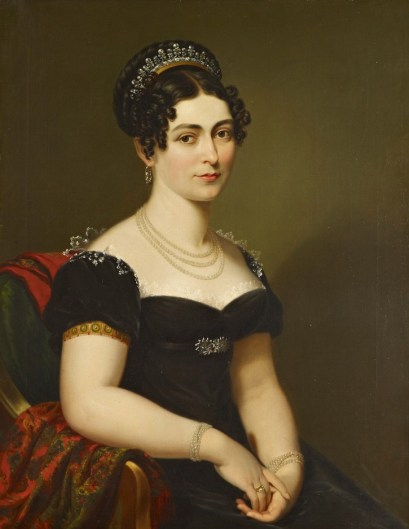 Princess Victoria – Queen Victoria’s mother—was born in the small German town of Coburg on August 17, 1786. She was the fourth child of parents – Francis, Duke of Saxe-Coburge-Saalfeld and Countess Augusta of Reuss-Edersdorf. Her full name was Princess Marie Louise Victoria of Saxe-Coburg-Saalfied.

At the age of 17, she got married to Prince Emich Carl of Leiningen. From her marriage to Charles, Victoria gave birth to children – Prince Carl and Princess Feodora.

In 1814, the 28-year-old Victoria was widowed after Carl died. Because her son Prince Carl had not attained the age of majority, Princess Victoria served as the regent for her late husband’s principality.

Four years after the death of her first husband, Victoria married Prince Edward, Duke of Kent and Strathearn at Kew Palace on 29 May 1818. The couple raised their only daughter, Princess Victoria (later Queen Victoria), at Frogmore House.

After the death of her husband Prince Edward in 1820, Victoria and her daughter moved out of Kew Palace into Kensington Palace.

What influence did the Duchess of Kent have on Queen Victoria? 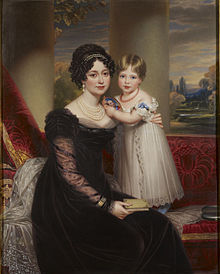 Queen Victoria with her mother, the Duchess of Kent

Queen Victoria’s mother maintained a tight grip on the young Princess Victoria. Realizing that her daughter had a big chance of inheriting the English throne from her uncles (George IV and William IV), Victoria set out to use what historians like to call the “Kensington System” to raise her daughter. She confined her daughter to a very quiet and secluded lifestyle. Heavily influenced by Sir John Conroy, Victoria tried to keep her daughter far away from her uncles’ court. She also made sure that her daughter kept in touch with their German roots, speaking primarily German in the house. German was in fact Queen Victoria’s first language as a child.

Largely in charge of what and how the future queen carried herself in public, the Duchess of Kent solicited the services of German governess Louise Lehzen. Under Lehzen’s guidance, young Victoria was given a liberal education in a host of disciplines such music, drawing, natural philosophy, history and foreign languages.

Amidst all of these, Sir John Conroy skimmed behind the scenes and was the voice in the ear of the Duchess of Kent when it came to majority of the decisions pertaining to Victoria. Rumor even had it that there was a romantic relationship between Conroy and Queen Victoria’s mother.

At one point in time, the Duchess even prevented Victoria from partaking in her Uncle William IV’s coronation ceremony in 1830. She was aggrieved because she felt the heiress apparent was given a slightly lower status in the sitting arrangement at the ceremony.

Along with Conroy, Queen Victoria’s mother organized several tours behind William VI’s back in order to introduce Victoria to the country. Victoria was very much against this; however, her mother proceeded to do it anyway.

As a result of the rigid nature of the “Kensington System”, the Duchess and her daughter developed a very frosty relationship. Their relationship would remain cold until Queen Victoria herself started a family of her own.

Upon the death of George IV on June 26, 1830, young Princess Victoria moved from being second in line to heiress apparent to the new King William IV. It was very much unlikely for William to father any legitimate child, considering the fact that his wife, Queen Consort Adelaide was past child-bearing age.

It had become apparent that Princess Victoria was bound to inherit the throne from William IV. With Sir Conroy and the Duchess largely bossing things in the life of Victoria, William prayed he lived long enough for Princess Victoria to attain the age of majority. The thought of the Duchess becoming queen regent upon his death filled William with so much dread. All through out William IV’s reign, the relationship between the Duchess of Kent and William IV was anything but friendly.

The second possible candidate for the regency was Victoria’s uncle Ernest, the Duke of Cumberland. In a bid to cement the Duchess of Kent’s claim to queen regent, Conroy went about peddling lies that Cumberland was plotting to poison heiress apparent Victoria, thereby making he, Ernest, the heir apparent to William IV.

The rift between Victoria and her mother got more severe when the Duchess tried to force Victoria to pick Sir Conroy as her private secretary. All these events resulted in souring the relationship between the Duchess and her daughter, Victoria. The Duchess made Victoria do a lot of things that Victoria was not in the slightest bit interested in doing. Example include, the various opera appearances that she had to attend in order to increase her legitimacy to the English throne.

It even got to the extent where Victoria took solace in her maternal uncle Leopold I, King of the Belgians. In Leopold, Victoria had a father figure that was obviously lacking all throughout her life.

After Victoria was crowned queen in 1837, she made sure she severed the hold that her mother and Sir Conroy had on her. Sir John Conroy was cast out; in 1839, he committed himself to exile. This was after rumors spread that he had impregnated Flora Hastings, one of Victoria’s ladies-in-waiting. It turned out that those allegations were completely false. Hastings was actually ill and not pregnant. When the news about Victoria’s harsh treatment of Hastings broke out, the public jumped on the queen’s back.

With the Duchess of Kent largely taken out of the picture, Queen Victoria relied heavily on the advice and counsel of her husband Prince Albert and William Lamb, Second Viscount Melbourne (the first British Prime Minister to serve during Queen Victoria’s reign).

As for the relationship between Queen Victoria and her mother, the two women sorted things out in time. Their relationship got much better with the birth of her children. The queen mother became a bit more appreciative of her daughter.

Death of the Duchess of Kent

Queen Victoria’s eulogizing her mother, the Duchess of Kent

On March 16, 1861, Queen Victoria’s mother, the Duchess of Kent, passed away at her Frogmore residence in Windsor. She was 74 at the time of her death, which was around half-past nine. Queen Victoria was with her in her last two hours. After her death, Queen Victoria went into a deep mourning. She would also discover so many items from her childhood that her mother religiously kept.

The Duchess of Kent was initially laid to rest at St. George’s Chapel. However, her body was later moved to its current place – Frogmore Mausoleum – in August 1861.