Who was Emmett Till and how did he die? 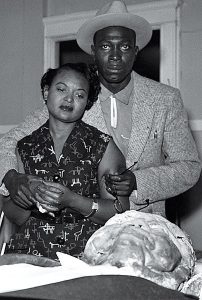 Mamie Till, Emmett’s mother and Gene Mobley, her fiance at the funeral of young Bobo.

While on summer holidays in Mississippi, 14-year-old Emmett Till became a victim of the hostile racial segregation prevalent in the south of the United States. Emmett’s mother, Mamie Till, had advised him on white ruthlessness in the Mississippi area prior to his visit, but whatever happened at a white-owned grocery store in Money, a community in Mississippi, Emmett did not live to tell his side of the story.

Among the many blacks murdered for infracting the Jim Crow Laws and various unwritten racist code of conducts, Emmett’s lynching heightened the agitation for civil right reforms from the mid-1950s.

How Did Emmett Till Die?

On the 20th of August 1955, Emmett said goodbye to his mother to spend the summer holidays at Mississippi with his uncle Moses Wright and cousins.

Four days after arriving at Money, Emmett, his cousins (Wheeler Parker and Simeon Wright) and some other friends went to a local grocery store, “Bryant Grocery and Meat Market” to buy some stuff. The store was owned by a man called Roy Bryant. The store’s cashier Carolyn Bryant, 21 at the time, who happened to be Roy’s wife, had an encounter with Emmett, which she claimed was tantamount to sexual advancement, or worse, sexual harassment on a white woman.

When Roy returned from a business trip on August 26, he heard rumors of the encounter between his wife and Emmett, and went on to confirm from her.

The next day, Roy teamed up with John William Milam (his half-brother), Carolyn, and Johnny Washington. The latter was known for doing “odd jobs” for Roy. The four drove out in a Chevrolet pickup to find Emmett so they could “teach him a lesson”, so to speak.

After looking around for a while, they pulled up at Wright’s place around 2 a.m. and ordered him to release Emmett to them. Wright pleaded that they forgive the little Chicago boy who knew less of Mississippi rules, but Roy, Milam and Johnny would not take any of the old man’s plea. They walked inside to search for the poor boy. Milam, with a flashlight in hand, dragged Emmett out of his bed and ordered him to dress up.  After Carolyn ─ who had been waiting in the vehicle ─ confirmed it was her harasser, they drove him away.

Wright waited for a little while and then set out to look for Emmett. After a fruitless search, he returned home at around 8 a.m.

It was revealed that Emmett’s attackers had initially wanted to drop him into the Mississippi River but changed plans and drove to the premises of Leslie Milam, William Milam’s brother. They whipped Emmett and shot him dead. Then they drove the body to the Tallahatchie River. There, they tied Emmett’s lifeless body with a barbed wire to an industrial fan and dropped him into the river.

On August 26, Robert Hodges who had gone fishing in the Tallahatchie River saw human fingers sticking out of the surface and called in people to see.  Wright, who had earlier reported Emmett’s abduction to the County Police, came along to see the corpse pulled out and placed in a boat. Apparently, Wright identified the bloated and disfigured body as Emmett’s by the silver ring on his (Emmett’s) finger.

The body was wrapped and transported to Chicago, where the bereaved Mamie insisted on an open casket funeral of her only son at the Roberts Temple Church of God in Christ. She aimed to expose the racism and flaws in democracy prevalent in America.  Thousands of people thronged in at the funeral of the black boy who had been abducted, whipped, lynched and thrown into a river for supposedly whistling at a white woman.

The Trial of Roy Bryant and J.W. Milam

Of all the people involved in the abduction and murder of Emmett, only Roy and Milam were tried. The trial was held at the Sumner Courthouse in Tallahatchie; proceedings started on September 19 of 1955.

There was neither a woman nor an African American among the twelve jurors that sat on the case, and all the five lawyers at Sumner chose to defend Roy and Milan. So enshrined were the Jim Crow Laws in that part of the country that it disenfranchised African Americans as well as women, prohibiting those groups from assuming the office of a judge in the Mississippi area.

According to Carolyn, Emmett grabbed her hands as she put the candy he ordered on the counter and asked her to be his date. She freed herself from his grip. Carolyn alleged that Emmett touched her waist and asked her not to be afraid of him because he had dated white women before. The judge who sat on the case deemed Carolyn’s testimony as irrelevant.

On the contrary, Simeon said Emmett neither touched Carolyn nor said anything inappropriate inside the store. Simeon mention the fact that Emmett whistled at Carolyn as she walked to her car. Emmett’s Mississippi-bred cousins added that it was at that point that they knew Emmett’s whistling was going to enrage the whites.

“Bryant Grocery and Meat Market,” the grocery store where 14 year old Emmett was accused of sexual harassment on a white woman.

Roy and Milam said they abducted and whipped “some sense” into Emmett, but they let him go at Money. This was supported by John Ed Cothran, the deputy sheriff who arrested the defendants after Wright had made a report.

Willie Reed, among others who saw Roy and his accomplices at Leslie’s place around 6 a.m. on August 28, witnessed that they were eight in the truck when it pulled up at the barn, and was able to identify four of them, including Milam’s driver Levi Collins (nicknamed “Too Tight”) and Henry Lee Loggins. He also claimed he heard the sound of whipping and screams of pain inside the barn.

Another witness claimed blood was dripping from under the truck, and when the group was alerted, Johnny said it was a the blood of a deer. However, according to this same witness, Milam lifted a tarpaulin to reveal a human body when he (Milan) was told it the deer hunting season was not due until some months.

Wright confirmed Roy and his team abducted Emmett on the said night and that a silver ring taken from the body’s finger belonged to Emmett. Mammie Till also confirmed it was her “Bobo’s” corpse she saw in the coffin. Emmett was nicknamed Bobo.

Meanwhile the Tallahatchie County sheriff, H.C. Strider, insisted the body found in the Tallahatchie was not Emmett’s, and that the decomposing corpse could not be a teenager but an adult. He also claimed the body looked like it had been in the river for as long as ten to fifteen days, contrary to the complaints’ assertion that it was pulled up three days after the abduction. Strider’s claim was backed by both a physician and H.D. Malone, the embalmer.

As for Levi and Loggins, neither of them were near the courtroom to testify; apparently Strider had kept them away at the Charleston Mississippi prison.

The judgment day was on September 23 of 1955.  The jury, after a sixty-seven minute break to deliberate, acquitted both defendants of the murder of Emmett Till, much to the disappointment of the Black American community and many across the world.

In later interviews and confessions, Milam confessed after their acquittal that he shot Emmett at the bank of the Tallahatchie River. He said he delivered the shot after Emmett yelled he had had white women and that he was not scared of them. Some members of the jury confessed they were undoubtedly certain that Roy and Milan killed the boy, but they felt it was unfit to execute or send two white men to life imprisonment for killing a black boy.

Emmett was neither the first nor the last black to be murdered by whites, but his murderers were among the few, if not the only, to be tried for killing or molesting blacks. There was some sense of consolation to the black communities in that, quite rarely, the murderers of an African American were tried, at least. But there was still a lot of rage among blacks for what they saw as the highest travesty of justice.

African-Americans, especially communities in the Mississippi and Chicago areas, amplified civil rights protests and condemned the trial as biased. Having happened at a time when the Jim Crow laws were still prevalent, the murder of Emmett Till resulted in the mobilization of many anti-racist movements across America to bring an end to those archaic laws.

Martin Luther King Junior led a rally against racial segregation in Montenegro shortly after Emmett Till’s murder, and this preceded the boycott of public buses by blacks, who wanted nothing more than to see the immediate end of racial segregation and abuse in America.

Emmett’s murder became a subject of interest; photos of his maimed body as well coverage of his funeral, trial and family kept circulating on major publications, including Tri-State Defender and JET.

In memory of Emmett, the school he attended in Chicago was renamed Emmett Louis Till Maths and Science Academy in 2005.  The Emmett Till Unsolved Civil Crime Act was also released in 2007, followed by the Emmett Till Anti-Lynching Act in 2022.

Emmett Till’s story has influenced all forms of arts, from films to songs, museums, statues as well as various structures and street names.  Many saw his murder as a catalyst in the fight against racial segregation in America at the time.