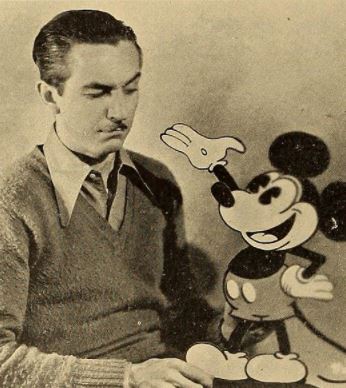 Most known for: Founding the Walt Disney Company; Winning 26 Academy Awards (including 4 honorary awards); One of America’s greatest cultural icons in the Animation industry

1918 – Enrolls at McKinley High School; he also works as a cartoonist in the school newspaper, where he mainly draws things pertaining to WWI

1918 – Applies to join the U.S. Army, but he is rejected because he is underage

January 1920 – He and Iwerks are laid off due to financial difficulties at the Pesman-Rubin Commercial Art Studio; the pair then go on to establish their own studio – Iwerks-Disney Commercial Artists

May 1921 – After gaining immense success with Fred Harman in producing cartoons called “Laugh-O-Grams”, Disney establishes the Laugh-O-Gram Studio. The studio employs the likes of Hugh Harman, Rudolf Ising and Iwerks

1921 – Begins the creation of a live-action animation Alice’s Wonderland, which stars Virginia Davis

July, 1923 – Relocates to Hollywood primarily to meet his brother Roy who was suffering from tuberculosis

1927: Begins creating Oswald the Lucky Rabbit, which is later distributed through Universal Pictures

1928 – Not only does he lose about half of his staff, he also loses his rights to Oswald the Lucky Rabbit

May 1928 – Mickey Mouse makes its first appearance; the cartoons are distributed by Cinephone

October 1931 – Goes through severe bouts of stress as his long-time partner Iwerks goes to work for Pat Powers, a former executive of Universal Pictures.

1933 – Works on The Three Little Pig, which goes on to win an Academy Award for Short Subject (Cartoon)

1938 – Production of Pinocchio and Fantasia begin

1940 – Pinocchio and Fantasia are released; both get lukewarm reception

1950 – Cinderella – a $2.2 million-Disney production (at the time) – is released; the film receives good reviews and garners about $8 million in the first year

1951 – Alice in Wonderland is released

1959 – Serves as a consultant on American National Exhibition in Moscow

1964 – Helps in the production of Mary Poppins; the film goes on to receive very excellent reviews

1966 – Involved in the production of The Jungle Book

1966 – Diagnosed with lung cancer and subsequently dies on December 15