Spirited, defiant, and an unlikely hero. Those are some of the words that come to mind when describing Túpac Amaru – the last Inca Emperor of the Neo-Inca State.

A Latin colonial rebel, Túpac Amaru came to the throne after the death of his brother. In spite of putting up a fierce resistance against Spanish colonial rule, the Neo-Inca warrior-emperor never really stood a chance against the might of Spain, which was at the time one of the mightiest in the world.

Centuries after his death, Túpac Amaru remains a symbol of hope and defiance to the indigenous people of Peru.

Who was Túpac Amaru? 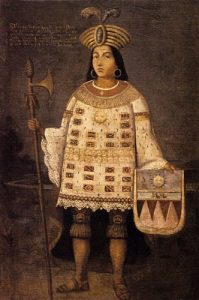 Túpac Amaru became the Sapa Inca, i.e. emperor, of the Neo-Inca State around 1571.

His dominion, the Neo-Inca State, was the last remaining independent nation of the Inca Empire. All the other Inca States had either capitulated to the conquest of Spain or simply gone out from existence due to diseases.

Túpac Amaru and the Spanish Conquest of the Inca Empire

Spanish Conquest of the Inca Empire – Image: The Inca–Spanish confrontation in the Battle of Cajamarca in 1532 resulted in the deaths of thousands of natives as well as the capture of the Inca ruler

The Spanish conquest of the Inca Empire (also known as the Conquest of Peru) began in the early 1530s and ended in the early 1570s. The conquest ended up subjugating an empire of more than 15 million inhabitants. It resulted in the deaths of over 6 million natives. A significant percentage of the deaths was caused by typhus, smallpox and other diseases introduced to Inca Empire by the Spanish.

Túpac  Amaru was the ruler of the Neo-Inca State, a small enclave that remained resilient against Spanish conquistadors. Amaru followed some of his predecessors’ courage and fought as hard as he could to halt Spain from gaining a foothold in his state.

Túpac Amaru was born into the Incan royal family. Still, when the Spanish arrived in Peru in the early 1530s, some members of the family like Manco Inca Yupanqui moved to Ollantaytambo first and later to Vilcabamba, where he established a small independent Neo-Inca State.

Manco Inca Yupanqui was killed in 1540 while fighting Spanish conquistadors and his 5-year-old son Sayri Tupac assumed the title of Sapa Inca (“only Inca”). Sayri allied with Spain and was baptized and he moved to the Spanish capital Cuzco where he died in 1561. The title was then passed to his half-brother Titu Cusi, whose 10-year reign required him to tread carefully, regardless he fortified Vilcabamba against the Spanish army. However, like his half-brother, Titu Cusi also accepted baptism although still wary of the Spanish conquistadors, he refused to leave his home. In 1571, Titu Cusi became ill and died.

Túpac Amaru, living in seclusion in the temple, was asked to take over the leadership of the Neo-Inca State. The new Sapa Inca was the brother of Cusi and Sayri.

It so happened that while Titus Cusi was ill, there was a Spanish diplomat, Friar Diego Ortiz sent with a translator to Vilcabamba. Ortiz and his entourage were blamed for Cusi’s death and eventually killed just a few weeks after Túpac Amaru took over the title of Sapa Inca.

Túpac Amaru, who had nothing to do with the murders of the Spanish diplomats, was blamed for it by the Spanish. The Spanish conquistadors could not have had a better reason to direct their fury against Amaru’s state.

The Spanish used the murder of those diplomats as an opportunity to launch a war against the Incas for violating the laws that governed the treatement of diplomats.

On April 14, 1572, the Viceroy Francisco de Toledo, Count of Oropesa, ordered his troops to attack and conquer Vilcabamba. The young Sapa Inca found himself in a war he did not bargain for but he was determined halt the Spaniards in the tracks and prevent them from taking control of his kingdom. The Inca soldiers launched an attack against the Spanish and their native allies despite having inferior weapons, however, each time they were forced to retreat.

By June 24, of the same year, the Spaniards had entered a deserted Vilcabamba. The city was destroyed by the Spanish and the last part of the Inca Empire, the Neo-Inca State, was officially under Spanish control.

Túpac Amaru had fled the kingdom with his immediate household. Following this development, a young officer Martín García Oñez de Loyola was ordered to capture the young emperor and his family. Amaru, his family and his generals were pursued through the forest.

In order to make it difficult for the Spaniards, Amaru ordered his people to split into groups and go separate ways. Regardless, many of the groups were captured, including Amaru’s sister-in-law and nephew.

The Spaniards, with the help of native allies in the region, continued to pursue Amaru and his immediate family members. In the end, Amaru and his pregnant wife were captured. The Spaniards gave them assurances that they would not be harmed provided they surrendered peacefully.

Túpac Amaru and the other captives were taken back to the ruins of Vilcabamba and ultimately marched into Cuzco on 21 September. Several priceless artifacts were taken from the destroyed city in Vilcabamba, including the remains of the two previous Sapa Incas and other sacred items. 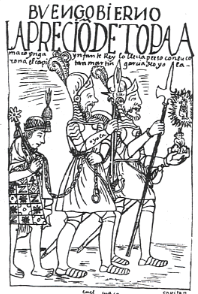 The murders of the Spanish diplomats to Amaru’s state was used as a justification for the Spanish Conquistadors to declare war on the last remaining stronghold of the Inca Empire. Image: Túpac Amaru – the last Inca Emperor of the Neo-Inca State, taking prisoner of the Spaniards

The Inca generals were tried and sentenced to death by hanging. The generals were severely tortured that most of them died before they would be hanged.

Túpac Amaru was also tried and sentenced to death by beheading for the murder of the priests in Vilcabamba. Before his execution, he converted and accepted baptism.

“Witness how my enemies shed my blood,” – the last words of Tupac Amaru just before his execution by the Spaniards in 1572. Image: Execution of Tupac Amaru I.

On the day of his execution in 1572, there are reports he was surrounded by Cañari warriors, who were traditional bitter enemies of the Inca. Several priests, and Bishop Agustín de la Coruña, pleaded for Túpac Amaru’s life, but the Viceroy, Francisco de Toledo insisted the sentence be carried out. Their heads were placed in pikes to dissuade other indigenes from rebelling against Spanish colonial rule.

A rebel group in Peru also adopted the name Movimiento Revolucionario Túpac Amaru and so did an Uruguayan rebel group. Although Túpac Amaru lived a very short life, his life and death have generated interest centuries after. 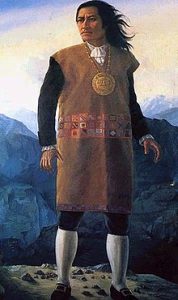 His name has been spelt in a number of variations, including Tupac, Tupaq, Thupa and even Topa.

It is said that Túpac Amaru’s name translate to “royal snake” or “bright snake”. The origin of the name is most likely a Quechua, which is an indigenous language spoken by the Quechua people that predominantly occupy the Peruvian Andes. Quechua was the most spoken pre-Columbian language in South America. Today, several millions of people speak the language and its many variants in Peru and other places.

The execution of Tupac Amaru, who was an independent king, was in contravention of practice of the time. This and many more other reasons was why Philip II of Spain was far from pleased by the execution of the Sapa Inca. However, the viceroy justified his decision by saying that Amaru was a rebel and that the Inca State leaders had previously accepted Spain’s rule.

Tupac Amaru’s descendants, including his three-year-old son, were banished to Mexico and other places.

“Witness how my enemies shed my blood,” were the last words uttered by Tupac Amaru, according to some accounts by the friars who witnessed the execution.