Tragic Facts about the Sinking of the Titanic 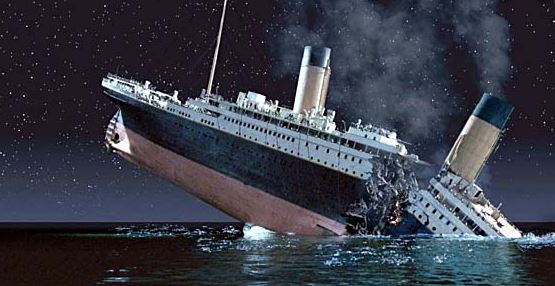 Facts about the sinking of the Titanic. Image credit: Bookriot.com

The Titanic disaster is one of the worst sea accidents the world has had to painfully live with owing to the tragic nature of the stories that emerged on that day. More than a century has elapsed since the ship went down (in 1912) with 1500 lives; but Titanic’s fame keeps soaring due to some chilly and tragic facts stated below.

The Number of Lifeboats was Significantly Insufficient

Lifeboats are designed to carry passengers away from a sinking ship. For a big ship such as the Titanic with roughly 2224 people, there were supposed to be enough lifeboats (about 32) for everybody on board. But the huge ocean liner only had 20 lifeboats. Each lifeboat was supposed to carry about 68 people. Basic math shows that 68 * 20 = 1360 people. Technically, this number is roughly equal to half of the 2224 persons that were on board the ship that day. Therefore, insufficient lifeboats largely contributed to the death of over 1500 people.

Some Lifeboats were not Full

Who would have thought that the stranded ship crew wouldn’t make good use of the available lifeboats? It is shocking to learn that the leadership (crew) became disorganized in the face of the disaster. Due to a flawed women and children policy, as well as the ensuing chaotic scenes, some lifeboats (mostly the first ones) were launched with few women and children on board. Instead of loading them full to their sitting capacity of 68 people each, some lifeboats departed half-full. The ship’s captain, Edward Smith, failed to supervise the launching of the boats; he shirked his responsibilities.

When it became clear to the crew that Titanic couldn’t survive the iceberg impact, the disorganized crew managed to conceive a great priority idea; an order came that women and children would board the lifeboats first. Sadly, this order was somehow misinterpreted to mean “women and children only”. As a result of this misconstrued directive, some boats left half-loaded with only women and children, even though there were some spaces for men. Men who made attempts to board the semi-empty boats were initially turned away until the last minutes.

The Ship Was Deemed Unsinkable

There is a famous myth of “unsinkability” of the Titanic. Some passengers, crew, and manufacturers believed that Titanic was a state-of-the-art ship with enough safety features to stay afloat in marine waters for long. Yes, it’s true that luxurious facilities (swimming pools, gym, restaurants, etc.) were incorporated into the Titanic. The ship’s builder – Harland & Wolff – boasted that the Titanic had 16 watertight compartments which were good enough to keep the ship afloat (even if 4 compartments were punctured in an accident). Unfortunately, the iceberg destroyed 6 compartments. The destruction of the compartments doomed the tag of “Unsinkable Titanic”. The Titanic’s captain Smith himself never believed that Titanic could perish in water; he trusted the engineering work that went into the ship’s construction.

It’s believed that an anonymous Titanic crew member once opined that “Not Even the Almighty God Could Sink the Titanic”. The vice president of the White Star shipping line, Philip Franklin, also boasted the same way that, the Titanic was beyond sinking. Well, until the last minutes, many passengers still held onto that myth. The Titanic did stay afloat for 3 hours before sinking, but the design flaws gave into the gushing in of cold ocean waters.

Design Flaws of the Titanic

The ship was deemed Unsinkable, but for God’s sake, the Titanic had deep flaws in its design! The bulkhead (vertical airtight partitions of the ship’s hull) weren’t high enough. The designers placed them at 10 feet (3 meters), just above the waterline of the ship. This height was too low and it explained why the ship couldn’t survive more than 3 hours. When some 5-6 compartments were punctured by the iceberg, water rushed in and dipped the ship. The dip allowed water to invade the other compartments. After the disaster, the ship’s builders raised the height of the bulkheads of the sister ships (RMS Olympic and the Britannic). The rivets and the steel plates of the ship were also found to be structurally weak. This explained why they couldn’t resist the impact forces of the iceberg.

The Titanic Was a Brand New Ship

Titanic had been in operation for less than a year before the iceberg sank it in mid-April 1912.  Launched on 31st May 1911, Titanic’s length measured 882 feet (268 meters). At that time, it was the largest artificial moving object on earth. There were tests cruises before the new ship began its maiden voyage on 10th April.

Traveling in the midnight, the ship received 6 iceberg warnings from other neighboring ships. On 14th April, the radio operators of the ship were notified of icy conditions in her surroundings. But the radiomen did a very terrible job as they failed to relay all the warnings to the captain; they also couldn’t be bothered much about the weather. Nearby ships such as SS Californian, SS Amerika, RMS Baltic, and RMS Caronia all sent warnings to Titanic.

Some of the warnings did reach the Titanic crew, but Captain Smith changed course and kept cruising at near the ship’s maximum speed. The goal was to reach New York City in time and set some historic records. By the time the Titanic’s own crew had spotted the iceberg, it was too late to swerve – the ship tried dodging, but she couldn’t complete her turning. Titanic rammed into the iceberg and broke down.

Titanic had 3 passenger sections (1st, 2nd and 3rd classes). When the crew enforced the safety of women and children first, 60%, 42%, and 25% of first, second and third classes passengers survived respectively.

Titanic’s Distress Signals were not Attended to in Time

Titanic crew sent many distress signals to nearby ships, but no ship attended to them early. They fired signal rockets to the skies, but their meanings weren’t clear to the nearby ships. The rescue ship – RMS Carpathia – arrived at the scene hours after the sinking.