Similar to many ancient cultures, the Celtic people of the Late Bronze Age had polytheistic belief system and pantheon of gods. Deities like Morrigan, Brigid and Dagda were very much revered in the Celtic pantheon. It was also very common for the people to use those deities as an explanation of the natural environment. The Celtic deities we are about to explore were given very human-like attributes, although complex and multifaceted. The common belief was that those gods played a huge role in the lives of people living in several Celtic tribes of the past. 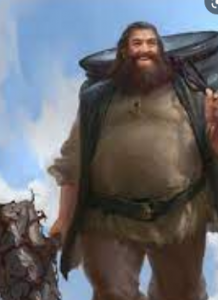 The Dagda’s club (lorg mór) was one of the most powerful weapons in Celtic mythology. It was believed that the club could lay to waste nine people at just a single strike. It could also bring the dead back to life.

Known as the chief of the Celtic pantheon, Dagda was revered as a fertility, agriculture and weather god. According to the stories, Dagda, who went by the epithet ‘the Good God’, wields a magical club (lorg mór) that gives him power over life and death. Another notable feature of Dagda was his prowess in magic.

His position in the pantheon was the most eminent one, as he was considered chief of Celtic gods. Much of the traits of the Dagda can be seen in Odin, the allfather god in Norse mythology. In other words, both deities were fathers of their respective pantheons as well as gifted in the use of magic and sorcery.

In terms of depictions, the Dagda usually donned countryside clothes. It was also said that the plump looking old man usually had in his hands a cauldron (coire ansic) that was always full. Another important thing that the Dagda had in his arsenal was his magical harp, which he could use to change the seasons and even men’s emotions. 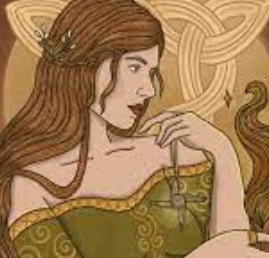 It will be a travesty of justice to have a list of Celtic gods and goddesses without including the Celtic goddess Brigid, also spelled Brigit. This goddess was primarily revered for her healing abilities and wisdom. An influential member of the Tuatha Dé Danann ( deities of pre-Christian Gaelic Ireland), Brigid goddess was believed to have vast knowledge of poetry and blacksmithing.

In Celtic cultures, Brigid’s name translated into “The Exalted One”. She was also revered as the goddess of spring season and smithcraft. Her mastery of smithcraft sometimes made her the goddess of fire.

Brigid was also seen as a Celtic goddess of poems and healing. Some historians opine that St. Brigid – who is one of Ireland’s patron saints – was a Christianized version of this Celtic goddess.

Described a youthful warrior, Lugh was the Celtic god of a host of things, including craftsmen, thunderstorms, ravens, and strategic warfare. With regards to the latter, Lugh was praised for his heroic efforts in slaying Balor – the one-eyed warrior king of the Formorians. For many years, the Celtic gods were caught in bitter war against Balor and his tribe of Formorii. Kind courtesy of the efforts of deities like Lugh, the Celtic gods were able to triumph over their enemies. It is for this reason why Lugh is sometimes regarded as the military commander of the Celtic pantheon. He is said to wield an invincible spear (Gae Assail) and a sling stone that when unleashed crushed opponents in a single heartbeat. It was this slingshot of his that he used in taking down Balor.

In some accounts, Lugh is the divine father of the Celtic hero Cú Chulainn, arguably the most famous hero in Irish folktale. 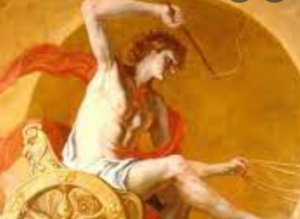 Belenus – the Celtic god in charge of healing and medicine. Due to this ability of his, some mythographers opine that Belenus was associated with some aspects of Greek god Apollo.

Belanus, whose name was also spelled as Belenos and Bel, is the Celtic god of sun. As a result of this role, this deity was known as the “Fair Shining One”. He was also associated with the wheel and horses. It was typical for ancient cultures to believe that sun deities rode across the sky pulling the sun with their powerful horse-drawn chariots. This point explains why Belenus was associated with those items.

In addition to his powerful horse-drawn chariot, he also possessed powerful weapons such as his thunderbolts and shield. 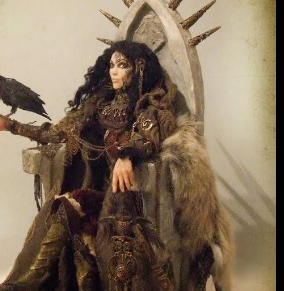 Celtic goddess Morrigan was popular among Celtic people due the support she offered to Dagda in securing victory during the great war against the Fomorians.

As the goddess of war and fate, the Celtic goddess Morrigan helped her fellow gods in securing vital victories over their enemies in so many battles. She almost always had a cloud of mystery hovering over her head. This feature of hers explains why she was sometimes referred to as the ‘Phantom Queen’.

It was quite a commonly held belief among Celtic people Morrigan was a trio of individual gods – Macha, Badb and Nemain – with each representing different parts of combat.

The Celtic people believed that Morrigan was the deity that kept their tribes and land safe from enemy forces. For this she came to be known as the ‘Great Queen’.

During battles, Morrigan would shape shift into animals such as crow or raven and fly over the battlefield. As the goddess of fate, she could tell which warrior would fall in battle. She also has the ability to influence the result of the battles, especially the battle against the Fomorians. Her ability to cause panic in the battlefield came very useful in the Celtic gods’ victory over the Formorii.

As stated above, the illicit affair between Morrigan and the Dagda produced the charming deity Aengus. 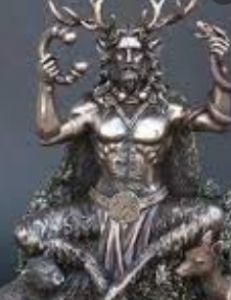 Associated with fertility, wealth and nature, Celtic god Cernunnos was also a master of all wild things. He was described as the ‘Horned One’ because of the large antlers that he was commonly depicted with. In some other depictions, he can be seen wearing a torc and a big metal ring. Often times, animals such as stags, bulls and horned serpent accompany him, reinforcing his reputation as the ‘Lord of Wild Things’. 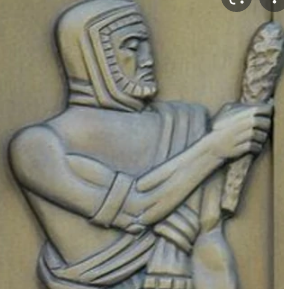 In Celtic pantheon, no other deity could rival the god Ogma when it came to speech and writing. Ogma, a soft-talker with calm personality, possesses unbridled ability to use language in many ways in the pursuit of his goals. Thus, the ancient Celtic people revered him as the god of eloquence. He is often depicted wearing many jewelry, particularly the golden chain that hangs from his tongue. Ogma was also the god of knowledge and wisdom. In the myths, he is credited with inventing Ogham, one of the first writing systems in Ireland. 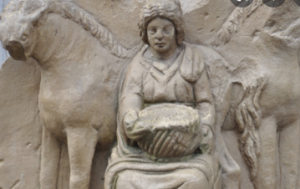 It’s been said that no Celtic deity had more knowledge of horses than the goddess Epona. This goddess was an extremely beautiful woman who was sometimes regarded as a fertility goddess. Her association with horses meant that she was revered by some Imperial Horse Guards of the Roman Empire.

Popularly known as the queen of the pantheon, Danu was depicted as a beautiful woman who embodied the nature itself.

She was an essential character in the Celtic mythology often associated with a host of things, including wealth, wisdom, fertility and death. This explains why many Celtic people revered her as the divine mother or the queen of the gods.

The primordial goddess from whose actions caused a great deal of things to happen in the beginning of time, Danu was a very important deity among Celtic tribes. A testimony to her importance can be seen in the translation of Tuatha Dé Danann, which means ‘The People of the Goddess Danu’. In some accounts, Danu was associated with goddesses like Ana, a goddess of nature.

Also spelled Oengus, Aengus was known among Celtic tribes as the youthful god of love. His youthful and charming personality made some of his worshippers refer to him as ‘young son’ (Mac Óg).

In Celtic pantheon, Aengus was revered as the deity of youth and love. When translated, his name comes out as “True Vigor” – a further reinforcement of his role among the Tuatha de Danann.

Aengus is the son of the deities Dagda and Boann. The sun is believed to have stood still for nine months while his mother was pregnant with him. It’s said that his father purposely did this in order to prevent other gods from knowing of his affair with Boann, who by the way was a married to another god. Therefore, Aengus was born in just one day.

Beloved for his polite character, Aengus was able to convince his father to bestow upon him the region of Bru na Boinne in Ireland. Often times, Aengus was depicted in the company of swans. The stories have us believe that Aengus fell madly in love with a girl called Caer Ibormeith whom he had seen in his dreams. After searching the land he found the girl who had turned into a swan and was mingling among several other swans. Aengus ended up marrying her and the two lived happily ever after.

In one version of the myths, Aengus’s songs were believed to have the power to put people to sleep for three days and three nights. In addition to being the patron god of young lovers, Aengus was also known as the chief poet of the pantheon.

Other notable Celtic gods and goddesses

Albioris – This god is one of the numerous gods of war that the Celts prayed to during battles. He was usually referred to as the Roman equivalent of Mars; hence his other name Mars Albiorix.

Bres – This god was revered as the offspring of the Elatha, a Fomorian prince, and the goddess Eriu. Generally speaking, Bres was seen as a fertility god who ruthlessly subjugated his people. In some accounts, however, he was praised for introducing to the people agriuclutural techniques.

Alator – Known as “he who sustains the people”, Alator was believed to be a god of war by the Celts.

Borvo – Similar to the Celtic god Belenus, Borvo is also a deity of healing and medicine. He is often shown with a shield and a helmet – symbols of his more aggressive side.

Nerthus – Another Celtic fertility goddess whose importance was pronounced in many Germanic tribes.

Cerridwen – Known for her shape-shifting abilities, Ceeridwen goddess was in charge of poetry. She was also the keeper of the famed cauldron of wisdom.

Maponus – Being a Celtic god of poetry and music, Maponus was often associated with the Greek god Apollo.

Nemausicae – For all things related to fertility and healing, some Celtic tribes prayed to the goddess Nemausicae.