Life Story of Prophet Muhammad: the Last Messenger of God in Islam

“There is no god except Allah and Prophet Muhammad is the Messenger of Allah.” | The Muslim profession of faith, inscribed on the Topkapi Palace (Turkey).

The Prophet Muhammad is widely regarded as the bedrock of the Islamic religion. Muslims across the world hold him in high regard and view him as a righteous messenger to whom God (Allah) revealed the Quran (Koran). Growing up in Mecca, Saudi Arabia, Muhammad’s date of existence is usually quoted as roughly 570-632 CE. Below, we present the full life story of the Prophet Mohammad (Peace be on to Him):

The Islamic founder’s birth occurred in the year  570 CE, Mecca. He was born to Abdallah ibn Abd al-Muttalib and Aminah bint Wahb. Unfortunately, Muhammad never saw his father with his own eyes – his father died before he came into the world. His family background and tree can be traced to the Quraysh tribe.

After the Prophet’s birth, his mother immediately knew that she had given birth to a great son. Aminah shared memories of the day she put the baby Muhammad down on the floor. According to her, the child directed his head towards the sky and gazed at the horizons, prophesizing one God (Allah). A voice then spoke out to her – ” you have given birth to a great one, he shall be called Muhammad”.

Muhammad’s paternal grandfather was called to pay a visit to the newborn. When he arrived, Abdul-Mutalib took the baby to the Kaaba and said some prayers to Allah. The Kaaba is a cube-shaped stone building in Mecca. Upon Muttalib’s return from the Kaaba,  the great baby boy was named Muhammad.

Less than 7 years after his birth, Muhammad was fully orphaned when Aminah passed away. His grandfather Muttalib took care of him as a guardian. Fully aware of the child’s great religious future, Muttalib specially treated Muhammad with all the goodness he could afford. It has been said that Muttalib even cared for Muhammad better than his own wards. This was because he had high faith in him.

At about age 8, another disaster struck little Muhammad. His grandfather Muttalib was called to eternal rest. For the rest of his upbringing, Muhammad was then cared for by Abu Talib, Muhammad’s uncle. His uncle was very protective of Allah’s messenger – he stood by him during his trying times until death separated them.

Muhammad’s family lines had strong trade ties and political influence in Mecca. During Muhammad’s birth era, most of the Arabians were nomadic people who traded goods across the desert. Their religious beliefs were largely that of polytheism. They believed and worshiped all sorts of gods (idols).

Deep within the city of Mecca, idol worshiping was no exception. Dozens of temples and shrines served as worshiping grounds for devout worshipers who either had no idea or didn’t believe in one God.

Of all the worshiping sites, the Kaaba was the most famous ground.  Islam followers believe that the Prophet Abraham (Ibrahim) was the one who built the Kaaba. In Arabic, Kaaba means “a cube”. Though numerous gods were worshiped in Mecca, Allah stood tall among the rest. He was the only true God that was not affiliated with idols.

During his teenage days, Muhammad partook in the nomadic lifestyle of his people. They used camels and crisscrossed deserts to trade for their livelihood. To some extent, Muhammad came from a less privileged family background. He joined his uncle on commercial voyages to Syria, and across the Mediterranean and then the Indian Ocean. Muhammad’s trustworthiness earned him the name “al-Amin”.

When he reached his twenties, Muhammad worked with a rich businesses woman by name Khadijah. Muhammad was 15 years younger than her. Their merchant dealings soon progressed into a strong bond of affection.

Khadijah, a wealthy widow, was all in to having Muhammad as a spouse, so she proposed marriage to him. Muhammad welcomed the idea and their union was blessed with plenty of fruits. However, not all their children made it into adulthood. Some died prematurely.

Controversially, in his energetic youthful days, Khadija was Muhammad’s only wife. His monogamous marriage was very unusual at that time, given the widespread polygamy that characterized his immediate environment. However, he later remarried other women when his first wife Khadijah died.

One daughter of his (Fatima) lived on and married Ali ibn Talib, a cousin to Muhammad. An Islamic branch called the Shi’ite Muslims have long maintained that Ali was the true successor of Prophet Muhammad.

Life and Meditation in the Cave

Muhammad grew up and loved to explore religious realms. He was far advanced in seeking to know Allah and truly understanding Allah’s mercies. In one such journeys, Muhammad discovered a cave called Hira in the mountain Jabal al-Nour. He found the cave convenient for religious meditations. He frequently visited the isolated hideout and got himself lost in contemplation of the Almighty and Magnificent Allah.

It has been alleged that Angel Gabriel visited Muhammad at the cage. The cave in someway manifested Muhammad’s level of spiritual commitment. Seated at the north of the mountain’s top, the question of how Muhammad discovered that isolated world is one that can’t be answered by an ordinary mind. To discover such a wonderful cave, many Islamic scholars and religious authors believe that it definitely took divine guidance and mercy.

Once he entered the cave, Muhammad lived in a separate world of his own. Apart from the sky view and the mountain surroundings, nothing else was visible to the naked eye. Shielded from external acoustic interference, everything was between Muhammad and the Merciful Allah. This gave the Prophet Muhammad’s mind the right atmosphere to think about things beyond the materialistic world.

At 40 years old, Muhammad was still in the mysterious cage when he had a spiritual encounter with Allah. It was here that he was presented with verse 1 of the Qur’an. After this revelation, Muhammad didn’t remain the same. It was a turning point in Islamic history.

In the space of 2-3 years after the Quranic revelation, Muhammad preached monotheism to his people. At first, he preached privately to people he trusted.  He later mustered courage and took Allah’s messages to the streets. And bingo, the Islamic religion was birthed. More and more people slowly joined Muhammad in praising Allah. They embraced Allah as the ever Merciful and the ever Gracious.

Since his new religion was founded in the hearts of an idol-worshiping society, it didn’t exist without some sort of hindrance or persecutions. The expansion of Islam brought forth life-threatening hostilities towards the Prophet and his followers. Not everyone saw him as a God-sent messenger.

From the onset, Muhammad was an enemy to many sections of idol worshipers in Mecca. They abused him verbally, physically and in many other ways. But his uncle Abu Talib had his back and defended Muhammad. So he carried on with his evangelism (Jihad).

By choosing Allah against the will and traditions of the inhabitants of Mecca, things took a dangerous turn in the form of sanctions, persecutions, and wars, after the revelation. Some of the Islamic converts who were held as slaves were tortured or murdered.

The Prophet Muhammad flees to Abyssinia

The idol-worshipers rose up against the Prophet Muhammad’s followers. By 614 CE, the severity of the persecution forced Muhammad to direct his fellow Muslims to flee to Abyssinia for protection. Abyssinia was a Christian Kingdom in Ethiopia. They had a just king who was hospitable to the Muslims. The Quraysh people reportedly tried to bribe the Abyssinian king to sacking the Muslims, but their wicked efforts failed.

A year after the successful migration of some Muslims to Abyssinia, the Quraysh people put up sanctions and targeted Prophet Mohammed’s family, his activities, and his followers. As a result of the sanctions, Muslims moved and settled at the site of a Meccan mountain. The sanctions flopped in 618-619 CE, after 3 years.

More Troubles, plus the Loss of His Wife and Uncle

Soon afterward, Muhammad lost his dear wife Khadijah. More troubles set in when his uncle also passed away. The Prophet suffered more persecutions from the enemies who were hell-bent on eroding Islam. The intensified persecutions necessitated a pilgrimage in 622 CE. The Prophet met with elderly leaders from Yathrib City and they pledged their protective support to Muhammad.

When the plan leaked out to the Quraysh people, the Yathribs had to quickly move back to their home. Sensing the impending threat, the Prophet instructed his people to secretly emigrate to Yathrib. In response, the Qurayshites plotted to have him killed as soon as possible. The Quraysh tribes collectively planned to carry out the murder in the night time when the Prophet would be asleep.

The Prophet Muhammad’s Pilgrimage from Mecca to Medina

Fortunately, Allah saved Muhammad from death at the last minute.  On the night of the planned murder, Allah instructed him to leave Mecca immediately and make his way to Yathrib. The Prophet did as Allah had instructed. When he safely departed from Mecca to Yathrib, Yathrib was renamed as “al-Madina” or Medina.  This famous emigration of the Prophet is called the Hijra.

The date of this important event is given as 622 CE. It happened about 12 years after the revelation of the first Quranic verses. The Prophet’s escape to Medina has significant implications in the Islamic world. It helped the Islamic religion to establish a strong foundation. The prophet lived in Medina for up to 10 years, before he left the world.

In the following years (624-628 CE), many battles were fought by the Muslims for their lives. The most significant battles were the Battle of Badr and the Battle of the Trench. These were followed by the Siege of Medina, which resulted in a peace treaty between the Meccans and Muhammad’s followers.

When the Meccans broke the treaty, another war broke out.  In 630 CE, Muhammad’s Muslim army was able to counter and defeat the Meccans pagans without fighting to the extreme.

By this time,  Muslim numbers had grown significantly. Prophet Muhammad pardoned his oppressors. As a sign of good fate, or perhaps with Allah’s intervention, the Prophet’s former foes willingly converted to Islam. The Muslim community then collected and destroyed all pagan items (idols) close to the sacred Kaaba.

Death of Prophet Muhammad and His Burial Place 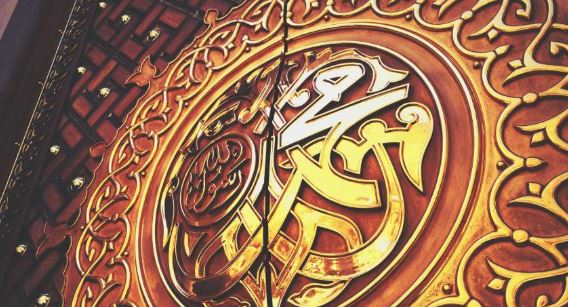 “Prophet Muhammad, the Messenger of God” inscribed at the entrance of the Prophet’s Mosque (Al-Masjid an Nawabi) in Medina, Saudi Arabia.

After resolving the conflicts with the pagans, Prophet Muhammad (peace be unto him) took his pilgrimage back to Mecca. In March of 632 CE, on Mount Arafat, the Prophet gave out his last sermon. He later went back to Medina. There, a deadly illness attacked him and he sadly never recovered.

On 8th June 632, the Prophet Muhammad (in his early 60s) took his last breath. There are conspiracy theories that the Prophet was poisoned. To date, there is no evidence to support such claims. Prophet Muhammad was buried at a mosque in Medina, the al-Masjid an Nawabi (present day Medina, Saudi Arabia).

He is regarded as the “Last Prophet”. Muhammad teachings are summarized as the Hadiths. With regard to the Sunnah, they talk about the prophet’s exemplary lifestyle. Muslims believe that Muhammad was the only Prophet who saw both heaven and hell before dying.