St Wenceslas: Everything That You Need to Know About the Duke of Bohemia 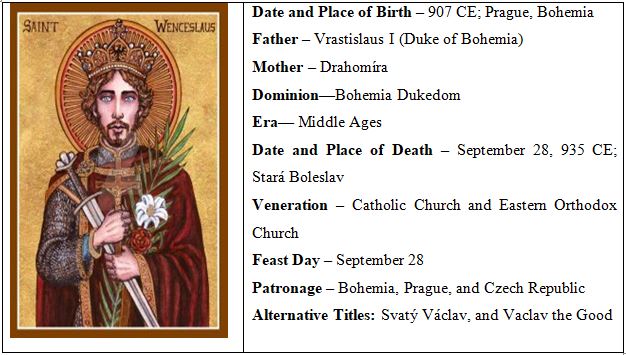 Who was Saint Wenceslas?

Born in present-day Prague, Wenceslas (also called Wenceslaus) was the duke of Bohemia in the 10th century CE. Although his mother deeply held pagan views, the Bohemian ruler remained resolute in defending Christian values and belief.

Wenceslas is believed to have set up a number of churches and charitable centers all across Bohemia. This enabled him to win the admiration and respect of his people. He also devoted his life to caring for the downtrodden in the society, particularly, the widowed, the sick and afflicted, and the orphaned children.

In spite of all his benevolent works, and his commitment to the spread of good Christian values and the faith in general, Wenceslas was cowardly murdered by his jealous brother, Boleslav the Cruel.

Wenceslas was born in 907 CE in Stochov (present-day Czech) to parents – Vrastislaus I (Duke of Bohemia) and Drahomíra. Vrastislaus I, who hailed from the influential Přemysl dynasty, ruled Bohemia from 870 to 889 CE. It has been stated that Wenceslas picked up his Christian values from his father’s side.

On the other hand, Wenceslaus’ mother Drahomíra came from a pagan family background. Her father was a pagan chief who belonged to the Hevelli – a tribe that lived around the middle of the Havel River (present-day Havelland region, eastern Germany). In order to marry Vrastislaus I, Drahomíra was baptized. Regardless of the baptism, Wenceslaus’ mother continued to be a devout pagan.

At age 13, Wenceslaus’ father passed away. Owing to the fact that he had not yet reached the age of maturity, his paternal grandmother Ludmila of Bohemia became the regent.

Wenceslas was put in the care of regent Ludmila, a devout Christian. Secretly, Ludmila exposed Wenceslaus to a lot of teachings in Christianity. When his mother caught wind of it, she had Ludmila executed in 921 CE.

Wenceslas’ pagan mother Drahomira then became regent after the death of Ludmila. For years, Drahomira relentlessly persuaded the young boy to adopt pagan beliefs; however he remained true to his Christian beliefs. In the five years that she ruled as regent, Wenceslaus’ mother did everything in her power to halt the spread of Christianity in Bohemia. Scores of influential Christian leaders in Bohemia were either jailed or killed simply because of their beliefs.

When did Wenceslas become the Duke of Bohemia?

Upon reaching the age of 18, in 925, Wenceslaus inherited the dukedom of Bohemia. The young duke made sure that all his mother’s anti-Christian policies were stopped. He either fired or exiled the pagan officials in his mother’s court. Finally, he had his mother exiled to Budeč, where she spent the rest of her life.

Before Wenceslaus took control of the dukedom, he decided to appease his younger brother Boleslav by giving him a significant number of Bohemian territories to rule over.

Conflict with the German king Henry I the Fowler

For quite a long time, the Magyar and Saxon and East Franks (led by king henry the Fowler) were a thorn in the flesh of the Dukedom of Bohemia. Starting around 895 CE, Bohemia dealt with such attacks by paying large amounts of tribute to the East Frankish king Arnulf of Carinthia. With such close alliances between the Bohemians and the Bavarian Duke Arnulf, Bohemia was able to remain relatively safe from the German king Henry I the Fowler.

However, this situation changed completely when Henry and Arnulf formed an alliance. In 929, the combined armies of Arnulf and Henry marched into Bohemia. Wenceslas had no option than to appease the attackers by resuming the payment of tributes to East Frankish king Arnulf of Carinthia. This act helped prevent Bohemia from being overran by Henry.

Why was St. Wenceslas killed?

After capitulating to Henry I the Fowler, a number of nobles and courtiers of Wenceslas felt aggrieved. Those nobles were outraged simply because Wenceslas did not put up a fight against the German king henry I the Fowler. The  aggrieved noblemen proceeded to plot Wenceslas’ death. They were aided by Wenceslaus’ brother Boleslav (also known as Boleslaus, the Cruel).

Some versions of the story state that the conspirators planned to murder Wenceslas at a party organized by Boleslav. Other versions state that he was killed on his way to a church – just in front of the church door.

What is blatantly clear in all the stories is the role Boleslav played in the death of Wenceslaus – his own brother.

When and Where did St Wenceslas die?

The accepted date of Wenceslas’ death is September 28. However, the year of his death has been given as either 929 or 935. The year 935 is commonly accepted by historians.

The place where Wenceslas was believed to have been murdered was during the feast of Saints Cosmas and Damian in Stará Boleslav. The feast was organized by Wenceslaus’ brother Boleslav.

The story goes on to say that three associates of Boleslav — Tira, Česta, and Hněvsa – collectively jumped Wenceslaus, stabbing him countless times. Once the Wenceslas was down, Boleslav picked up a lance and inflicted further injury to the dying duke.

After Wenceslaus’ death, a number of unexplained, miraculous events took place in Bohemia. These events rattled the cage of Boleslav, forcing the murderer to transfer the remains of Wenceslaus to the Church of St. Vitus in Prague.

In the years following Wenceslas’ death, the martyred duke came to be venerated as the patron saint of Bohemia.

Who succeeded Wenceslas to the Bohemian throne?

After the death of St. Wenceslaus, Boleslav (Boleslaus) – brother and murderer of Wenceslaus – became the duke of Bohemia.

A few decades after Wenceslas’ death, there were stories of miraculous happenings in and around Saint Vitus Cathedral at the Prague Castle. The cathedral housed the remains of Saint Wenceslaus. Starting in the late 10th century, the mention of Wenceslaus frequently elicited enormous reverence and admiration. Also, the Cult of Wenceslaus flourished around that same period. The goal of the cult was to spread the Christian values that St. Wenceslaus embodied. Some of their works even made it all the way to Russia.

In the year that WWI ended, the 12th century “Saint Wenceslas Chorale” – one of the oldest known Czech songs – became a staple in the newly formed Czechoslovakia. Many Czechs even wanted the song to be used as the national anthem of Czechoslovakia in 1918.

It must be noted that Saint Wenceslaus is not only venerated and admired in Czech, the saint is equally admired worldwide by Catholics and the Roman Catholic Church.

The famous Wenceslaus Square in Prague, Czech, features a life-size equestrian statue of Saint Wenceslaus. The square also has other patrons of Bohemia, such as – St. Adalbert, St. Ludmila, St. Prokop and St. Agnes of Bohemia. Over the years, the square has served as a lively spot for numerous social events, as well as a vibrant place for demonstrations, especially during the dark years of communism.

In Stará Boleslav, there is a popular basilica that bears the name of St. Wenceslas. In addition to all the above, his name and story are frequently covered in Czech arts and paintings. For example, one can find a pictorial explanation of Wenceslaus’ story on the wall of the Chapel of the Holy Cross, Karlštejn Castle near Prague. Likewise, in the Žižkov district, there is a horseback artwork of Wenceslas found at the Saint Prokop Church.

The feast day of Saint Wenceslas is on September 28. On that day, pilgrims head to the city of Stará Boleslav. The day is also a public holiday in the Czech Republic. Since 2000, the name of the day has been also called “Czech Statehood Day”.

Many stories exist about how miraculous things took place in the life of Wenceslas. Here are a few of those stories:

While Wenceslaus was alive, it is believed that a rebellious count by name Radislas marched his army to attack Wenceslas. Wenceslas as much as possible wanted to make peace. The duke sent several delegates to Count Radislas to negotiate for peace; however, the Count turned all of those requests down.

The two sides – Wenceslas’ army and Radislas’ army – proceeded to ready themselves for battle. In a bid to avoid the deaths of many innocent lives and soldiers, Wenceslas challenged Radislas to a one-on-one combat. The latter accepted it.

As Radislas rode towards Wenceslas to attack, Radislas witnessed some sort of heavenly apparitions. Legend has it that, Radislas saw two angels of God around Wenceslas. The angels ordered Radislas to stand down.

Shortly after the encounter, Radislas turned a new leaf and made peace with Wenceslas. He prostrated before the duke and begged for forgiveness. Wenceslas forgave him of all his transgressions and Radislas returned home with his army.

Wenceslas and the soldiers at Blaník

A group of soldiers based in Blaník were once awoken by the appearance of St. Wenceslas. The soldiers were ordered to send aid to the Czechs during their time of need.

Additionally, it has been long believed that the equestrian statute of St. Wenceslas would come to life whenever the country of Czech is in danger or at a very critical juncture. Wenceslas would then proceed to raise the army at Blaník. The saint would then cross the Charles Bridge, retrieve the sword of Bruncvík and defend the Czechs. 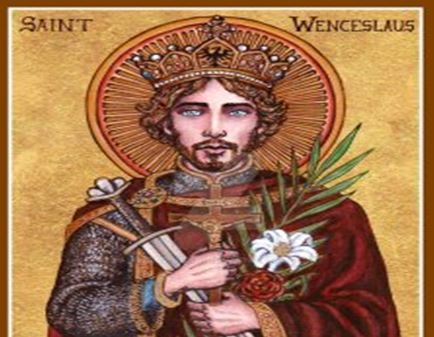 The Christmas Carol “Good King Wenceslas” was written by John Mason Neale (1818 – 1866) in 1853. Largely a traditional folk tune, the carol tells of the good deeds of St Wenceslas and the spirit of giving during Boxing Day or the Feast of St. Stephen.