Shiva, also known as Siva, the Destroyer or the auspicious one, is one of the most important and best-known deities in Hinduism. He is venerated as the god of rebirth, destruction, benevolence and protection; and he is often revered as one of the deities in the Hindu trinity (trimurti). He is depicted as a half-naked man with several arms. In Shavism, he is regarded as the Supreme Being and creator.

He has a third eye which he once used to incinerate the god of love Kama. Accordingly, he is also worshiped as the deity who destroys the universe every 2 or so billion years. Shiva is primarily associated with two deities Sati, the goddess of fertility; and Kali, the goddess of death.

This article explores the story, symbols and powers of Shiva, a very important god for Hindus. 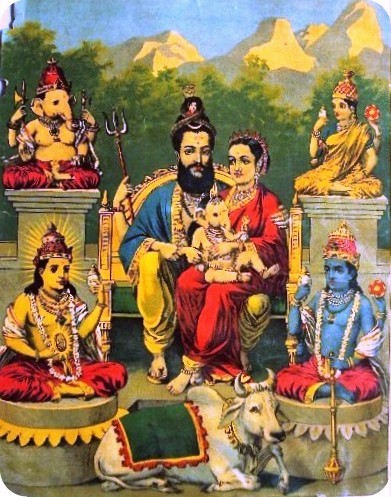 Shiva sitting in the center with Parvati and their son Ganesha; they are flanked by (clockwise from left upper corner): Ganesha, Devi, Vishnu, and Surya | Oleograph by Raja Ravi Varma

In Hindu religion, Shiva was revered as one of the three great gods of the universe; the other two are Brahma and Vishnu. He married Sati, the goddess of fertility. And after Sati reincarnated as Parvati, Shiva and his wife went on to have a son called Ganesha (Ganesh). It is believed that the god Ganesha was created to protect and keep Parvati company while Shiva went into long spells of meditation.

Shiva also had sons like Skanda (or Karttikeya) the god of war, and Kuvera, the god of wealth.

How Shiva’s son, Ganesh, came to have the head of an elephant

In one account of the story, Shiva once went into a very long meditative spell only for him to return unable to remember his son Ganesh. Thinking the young Ganesh was an intruder, Shiva summoned his demons to keep Ganesh busy so that he Shiva could see Parvati. While the Ganesh played with the demons, the demons mistakenly chopped off Ganesh’s head. Parvati’s cries made Shiva come to his senses. He then replaced the chopped off head of Ganesh with an elephant head. The elephant’s head was the nearest available head.

How Shiva saved Ganga, the goddess of the Ganges River

Ganga, the goddess of the Ganges River, was one of three wives of Vishnu. The other two were Lakshmi (goddess of fortune) and Saraswati (goddess of wisdom). Unable to cope with the domestic troubles at home, Vishnu sent Ganga to Shiva. The goddess was flung to earth at great speeds. Shiva acted swiftly by using his hair topknot to give Ganga a safe landing on earth.

Another very sacrificial act performed by Shiva was when he turned into tortoise in order to save mankind from the venom Vasuki (the lord of serpents ) unleashed upon the world. It is believed that Shiva drank the poison, which in turn caused a blue scar in his throat. This probably explains why he is depicted in blue color.

Why does he destroy the universe?

Hindus believe that Shiva destroys the universe in order to make way for an even better universe. This triggers a cycle of birth, destruction and rebirth. For without destruction, the universe would remain in a state of mediocrity.

His powers are mainly in destruction and recreation. In terms of destruction, he was such a fierce deity that it took the combined pleas of several gods to stop him from going on a voilent rampage. His area of control was not just in the physical realm. It is believed that Shiva has the ability to destroy the illusions and the lies we hold in our minds. He does this by stepping on a dwarf called Apasmara Purusha.

Hindus also believe that every time he destroys the universe, he creates a new and far better one; in the process, he gets rid of the flaws of this world. In no way is the destruction carried out in an unplanned manner; it is carefully calculated and constructive, happening once every 2,160,000, 000 years, according to Hindu religious texts.

Aside from being an agent of change, Shiva also has massive amounts of good in him. He has been described as a very benevolent god who blesses his followers.

The above has made him to be revered as both a good and a “bad” deity – a perfect embodiment of yin and yang.

Shiva’s contradictory characteristics make him a very unpredictable god. In some cases he has had to be restrained by other gods, least he destroyed everything in his path.

According to some accounts, Shiva is sometimes a complete hedonist, engaging in all sorts of worldly pleasures. This uncontrolled passion can be dangerous or violent at times. His wife Parvati, is often the one who calms him down, giving him a balanced demeanor.

In other cases, he avoids all earthly pleasures, preferring to remain an ascetic. For example, he has been called “The Great Ascetic” for the manner in which he commits himself to long periods of meditation or yoga. It is believed that he meditates for years and years until he becomes fully happy.

Shiva meaning and origins | Shiva depicted in a sitting position

For some Hindu sects, Shiva is the primary god. Those sects are referred to as Shaivism. In addition to India, Shiva is frequently worshiped by Hindus in Sri Lanka and Nepal.

Typically, Shiva is depicted as half-naked man with blue face and neck. As it was common with many Hindu deities, Shiva possessed several arms. His hair is tied in a knot – a symbolic reference to the famous Ganges River.

His headdress often contains the crescent moon and a skull (the fifth head of Brahma).

In some cases, he has been depicted with a white body. In other cases, he has the body of man from head to waist, and the body of woman from waist to toes. The feminine half is usually depicted as Parvati, his wife. This further reinforces the notion of equality Hindus attach to men and women.

Generally beside his wife, Parvati, Shiva often sits in a yoga position. Owing to this, he is seen as the patron god of yoga and meditation.

Other very important appearance of Shiva shows him in very simple attire, often an animal skin (a tiger skin). Likewise, his environment in many depictions and painting is not the plushest of environments.

Shiva has a third eye that many Hindus believe is a representation of wisdom and boundless insight and energy. With this third eye of his, he once consumed the Hindu love god Kama with fire. Kama had tried to distract Shiva while he was in a deep meditation. Enraged by Kama’s insolence, Shiva rained down fire from his third eye upon Kama. Out of fear of what Shiva might do if he gets angry, many Hindus typically cover up Shiva’s third eye.

To show his worshipers just how dangerous he can be sometimes, Shiva is commonly depicted with a cobra necklace. This symbolizes he vast natural power over the most dangerous of animals on earth. The cobra fits perfectly with Shiva’s role in Hindu pantheon – his destructive and creative nature. Cobras also generally shed their skins, paving way for a new layer of skin. From this angle, Shiva might not necessarily be a total force of destruction; rather, he is the deity that burns everything down to ground in order to make way for an even better world and society.

Other symbols of Shiva are the Vibhuti (three horizontal lines drawn with ash across his forehead); the trident; crescent moon; and bulls.

In Hindu religion, the holy triumvirate refers to beings in charge of creation, maintenance and destruction of the universe. The deities are Brahma, Vishnu and Shiva. Brahma is assigned the task of creating while Vishnu preserves the universe. As stated earlier, Shiva is the one who destroys the universe so that the cycle could start all over again.

His trident is in part reference to him being part of the Hindu triumvirate deities – Vishnu, Shiva and Brahma.

Shiva is often shown smiling and in a very relaxed position. There is nothing on his face that shows the slightest inclination that he is a destructive god. This is just one of the numerous contradictions about Shiva. From the cosmic point of view, the role Shiva plays is an absolutely vital one. There simply cannot be creation without destruction. Hindus believe that were it not for the crucial role Shiva plays, the world would perhaps have ground to a halt – with nothing new emerging.

Another important role of Shiva comes in the entertainment side of things. Shiva is believed to be an expert dancer; his mastery in the art is so high that no deity comes close to his level. For this, he has been venerated as the Lord of Dance.

On the face value of things, Shiva being the Lord of Dance might simply refer to casual dancing. However, from a cosmic point of view, Hindus believe that Shiva’s mastery of dance is a metaphorical reference to the harmony we see in nature or the universe. His dance rhythm is what holds the world together.

Other less dark side of him portray him as very compassionate and benevolent god. This is evident in his marriage to the goddess Sati (later reincarnated to become Parvati). He is known for being very gentle. Hindus believe that it was Sati who tamed him into the good husband that he is.

Shiva is also believed to be the deity in charge of keeping the Vedas safe. The Vedas are ancient religious texts of Hinduism.

According to one Hindu story, Lord Shiva married the goddess Sati (the fertility goddess) against Sati’s father’s wishes. The fracture between Sati’s father (Daksha) and Lord Shiva’s relationship resulted in the former not inviting latter to a prayer ceremony. All the other gods were invited except Shiva. Incensed by this, Sati cast herself into a large fire at the ceremony and dying in the process. Her death caused Shiva to wake up suddenly from a deep slumber. Shocked by the death of his wife, Shiva proceeded to end the world by dancing the “death dance” – the Tandav. However, just as he was about to do so, his fellow gods interceded by sprinkling the ashes of his dead wife Sati all over him. It is believed that Sati’s ashes soothed Shiva’s pain and stopped him from destroying the universe. Deep in mourning over his wife’s absence, Shiva then went far into the outer regions of the universe for many, many years to meditate.

Luckily for the universe, Shiva ended his exile after Sati was reincarnated as Parvati. The two then reunited. The reincarnated Sati (Parvati) watered down the temper of Shiva. The two deities went on to have a perfect marriage – a type of marriage that their believers and worshipers pray to have.