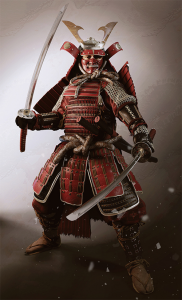 The Samurai Warrior (Bushi) with a Katana.  Image Source.

Assuming you are enthusiastic about Japanese history and culture, your familiarity with the Samurai is already guaranteed. In the simplest of explanations, the Samurai were a highly educated group of Japanese warriors who were powerful in the early government of Japan. They are well-known for their disciplined code of conducts.

Below is a historical overview and some key facts about the Samurai:

Samurai was a popular term that identified Japanese noble warriors (also known as Bushi). Evolving over time, Samurai generally came to be referred to as a collective name for members of the fighting class that dominated the public landscape of Japan from the 12th-19th centuries CE. Operating from Kakamura City, Japan, the Samurai displayed top-notch military skills that continue to baffle the minds of the current generation. Their war accomplishment laid a strong cultural history for Japanese.

We can accurately rate the Samurai as one of the disciplined group of warriors who exactly knew how to conquer. When you look back at the Muromachi Period, which lasted from 1338 to 1573, the Samurai left a lasting effect on Japanese art and culture. Popular among such arts include the tea ceremony – a ritual activity that involved the preparation and serving of green tea.

Bushido (The Samurai Code of Honor and Ethics)

The Samurai had an undocumented code of ethics that defined how an ideal member was supposed to carry himself ( “way of the warrior“). One of the ideal Samurai characters is stoicism. To be described as being stoic, a soldier simply needed to be insensitive to pain. The code of ethics of the Samurai soldiers was also known as the Bushido.

Bushido asked a lot from the warriors – they were supposed to exhibit extreme and unconditional loyalty to their masters. With this Samurai ethical code, keeping one’s honor was more valued than life itself.

Bravery was also another necessary war quality any member of the Samurai must have. Their ritual suicide act (popularly known as Seppuku) is one that will surely drop your jaw. Trust me, after learning of its meaning, you won’t even like to try Seppuku (Hakiri). When a Samurai member committed a shameful act or was about to be captured by an enemy, he would painfully kill himself by piercing his stomach with a dagger. It was an honorable way of dying. The only shocker is that the masters (Daimyo) of the Samurai could also instruct their subjects to commit suicide. Subjects were also expected to kill themselves in the event that their master died. When the suicide proved to be too painful or unsuccessful, a second person would cut off the head of the suicide committer. 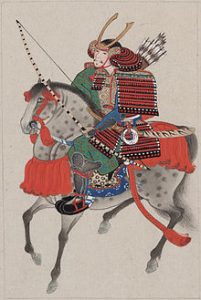 Members of the war group were recruited as early as 10-years-old. The soldiers usually rode horses for their military expeditions. From the early days of medieval times, a Samurai soldier’s war tools comprised bows and swords (the Katana). Their curved swords were of two kinds- short and long. Only full members of the Samurai could use two swords. Their military training involved mastering horse riding, archery, and sword fighting.

From the 17th century, senior Samurai members primarily used the sword while the lower class soldiers used the bow. Their bows were made of bamboo while the arrow was iron or steel-made. L-shaped spears were used by the early Samurai to hook and pull down enemies from their horses.

The Samurai also wore armors (including kabuto helmets) to protect their bodies from harm.

Keys Facts about the Samurai

The following are 6 key facts about the Samurai:

Samurai Constituted Not More Than 10% of the Japanese Population

Their military impact was huge but the Samurai fighters previously numbered about 5-6% of the Japanese population. At their peak growth, they accounted for up to 10% of the population. It has been suggested almost all the current Japanese generation share blood with the Samurai.

By definition, Samurai were male noble fighters. However, a section of Japanese female warriors was popular in Japan as Onna-Bugeisha. They partook in combat activities with the men. A popular weapon of the female warriors was the naginata – it was a lightweight curved spear. Even though female “Sumarai” existed, history hasn’t recorded much about the legacy of the women. When DNA testing was done on some popular battlegrounds, about 33% of the remains were women. Sadly enough, they have completely been forgotten by history.

They Were Highly Educated

The Samurai weren’t ordinary fighters; they were intellectuals who mastered warfare. A lot of them attained a good education in math and writing art (calligraphy). Some were experts in flower arrangement.

They Tested Their Weapons on Prisoners

Most of the Samurai stood not more than 5-feet tall. So basically, the English knighthood members beat the Japanese in terms of height. But the Samurai codes were deadlier than the English chivalric codes.

When they came into action during the 12th century CE, the Samurai saved Japan from being invaded by the Mongols. When they took control of Kakamura, they established a military government and ruled many parts of the country.

Samurai fought the 16th century CE Japanese Civil War (the Sengoku). It was Togukawa leyasu who put an end to the war by unifying Japan under the Togukawa shogunate. The shogunate was in place until 1867. Starting around the 1870s, the Samurai lost their influence. This diminished influence coincided with the end of feudalism as a new national army took over Japan.

The Samurai had an unmatched level of discipline, which surpassed that of other historic warriors; the Bushi codes guided their conduct. But the real source of inspiration to their codes was from three religions: Zen Buddhism, Confucianism, and Shintoism. Confucianism instilled respect into the warriors; Shintoism linked the Samurai warriors with their people and lands, and Zen Buddhism guided them to be great warriors. Among the three, Confucianism had the greatest influence on their suicide acts.