Queen Elizabeth II, Britain’s longest-living and longest-reigning monarch, has four children (three princes and one princess) with husband Prince Philip, the Duke of Edinburgh. The oldest of these royal children, as well as the heir apparent to the British throne, is Prince Charles; and the youngest is Prince Edward, the Earl of Wessex.

Due to their immense contribution to virtually every facet of the British society, Queen Elizabeth II’s children have received global press coverage over the last half a century or so. While many of the coverage have been on their extensive philanthropic and charitable activities, there have been some pretty negative publicity about Elizabeth II’s children. For starters, three out of the four royal children have had very patchy spousal relationships and have themselves been once divorced.

Below is everything that you need to know about Queen Elizabeth II’s four children:

Prince Charles, the Prince of Wales

Born on November 14, 1948, Charles Philip Arthur George is the first child of the reigning British monarch. The exact time and place of Charles’ birth were at 9:14 pm in Buckingham Palace, London. At the time of Prince Charles’ birth, Elizabeth was only 22 and was the next in line to the British throne. A day after his birth, the royal couple christened Charles at the Buckingham Palace. The ceremony was supervised by Geoffrey Fisher – then-Archbishop of Canterbury.

During his formative years, Charles enrolled at the Hill House School, West London, and Cheam School in Berkshire. At age 19, he proceeded to Cambridge University to study archaeology and anthropology at the Trinity College.

Just a few months before his 21st birthday, in 1969, Prince Charles was invested with the title of “Prince of Wales”. This title – His Royal Highness the Prince of Wales – is typically given to the first male son of the ruling British monarch. As heir apparent to the throne, Prince Charles has always lived under the spotlight of British media and news agencies.

All throughout his time at college, as well as the Royal Air Force Cranwell, he has been the one to receive the most coverage on the global stage. His tumultuous marriage to Princess Diana, which ended in a divorce in 1996, is just one of the numerous events that have rocked the British royal family in the past quarter of a century.

Prince Charles has two children (with Princess Diana): Prince William, the Duke of Cambridge, and Prince Harry, the Duke of Sussex. Since April 2005, Charles has been married to Mrs. Parker Bowless (currently HRH The Duchess of Cornwall). Although he did have an off-and-on relationship with his father, often estranged in some regards, the two have currently ironed out their differences.

Prince Charles has a similar astounding record as his mother, Queen Elizabeth II. The Prince of Wales holds the record of being the longest-serving heir apparent in the history of Britain. This has been due to Queen Elizabeth II’s longevity on the throne. 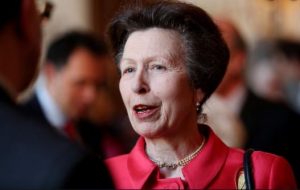 Princess Anne (Princess of Wales) is the only daughter of Queen Elizabeth II. Image Source: Cheatsheet

Right from an early age, Princess Anne has been very passionate about horse riding. She would go on to hone this passion of hers and make several appearances in professional equestrian tournaments. When she was 21, Princess Anne rode her way to victory at the European Championship in 1971. She topped this amazing feat of hers by competing at the 1976 Montreal Olympic Games.

Three years prior to her Olympic participation, Princess Anne married her first husband, Captain Mark Philips – an Olympic gold medalist in the three-day eventing equestrian team. The two said their vows in front of their family and friends at Westminster Abbey.

Her marriage to Philips produced two children: Peter and Zara. However, 19 years into the marriage, Philips and Princess Anne parted ways. Their divorce was finalized in April 1992. The Princess Royal then went on to tie the knot with Timothy Laurence – a naval officer. Anne and Timothy have no children together.

Over the years, Princess Anne has diligently carried out several duties, both in the U.K. and abroad, on behalf of the royal family. She has a very close relationship with her father, Prince Philip (the Duke of Edinburgh). Even up to this day, her passion for sports, especially horses and equestrian, has not abated. She was vital in helping London secure the hosting rights for the 2012 Olympic Games. Ever since her first official royal duty came at the age of 18, the Princess Royal has gone on to be personally involved in about 300 Charities across the Commonwealth. An organization that is dear to the Princess’ heart is the Save the Children UK. She has been the president of this organization since 1970.

In addition to her numerous titles, Princess Anne has the rank of Admiral and Chief Commandant of Women in Her Majesty’s Royal Navy.

Prince Andrew, the Duke of York 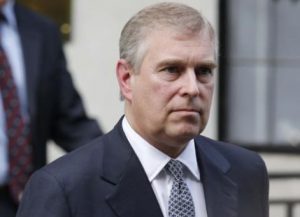 Coming in third on the list of Elizabeth II’s children is Prince Andrew. He was born at Buckingham Palace on February 19, 1960 – a whopping 10 years after his older sister, Princess Anne. At a very family-type Christening ceremony at Buckingham Palace, the prince was named Andrew Albert Christian Edward.

While growing up, the young prince attended the following schools: Heatherdown Preparatory School; Lakefield College School; and the Britannia Royal Naval College. He was about 19 years when he enlisted in the Royal Navy. After a couple of years, Andrew became a helicopter pilot.

As a result of an outdated succession law, Prince Andrew leapfrogged his older sister, Princess Anne, to become the second in line to the British throne. This was of course as at the time that he was born.  Due to an Act passed by the British Parliament in 2013, the succession to the British crown has since been disassociated from gender. Princes can no longer be placed higher than their older sisters in the line of succession.

Since the burgeoning of his older brother Prince Charles’ family, Andrew’s position in the line of succession keeps moving back. However, this has not stopped Andrew from featuring very much in the British monarchy. Over the years, he has come to be a very dependable representative of the queen in both the U.K. and abroad.

On July 23, 1986, Andrew and Sarah Ferguson got married at a very spectacular ceremony at Westminster Abbey. His current title of “Duke of York” was bestowed on him on the very day that he got married. The marriage brought forth two children – Princess Beatrice and Princess Eugenie.

And just like his two older siblings, Andrew’s marriage crumbled in the 1990s. In 1996, Sarah Ferguson and Andrew officially had a divorce. The two, however, continued to keep close ties in order to properly raise their children together.

Prince Andrew spent an extensive amount of time in the Navy. He has also journeyed to several places in the world, carrying out official royal duties on behalf of the queen and the U.K. Andrew can also boast of several skill sets in international trade, banking, and investment.

His most notable service to the public came during his admirable participation in the Falkland Islands War (1982). During the war, he was tasked with helicopter missions on the HMS Invincible. After the war ended, Andrew continued to serve in the Royal Navy, only retiring in 2001. His 22-years of service in the Navy saw him attain the rank of commander. In 2015, he was honored with a Vice Admiral title.

The latter part of his career has seen him serve on numerous boards of institutions and organizations, especially organizations in the finance sector. A patron of over 200 charities in both the U.K. and abroad, Andrew often lends his time to organizations such as the British Deaf Association, the Children’s Foundation, and Fight for Sight.

In the year 2019, Prince Andrew slightly came under immense public scrutiny after it was revealed that he was greatly associated with a disgraced and a well-known sex offender, Jeffrey Epstein. So far, barring this alleged friendship with Epstein, no further allegations of any wrongdoing have been proved. 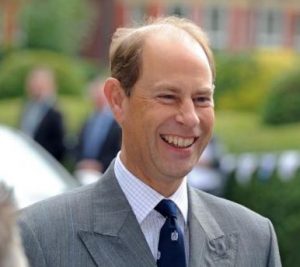 Royal historians described Edward as a very shy and bookish type during his childhood. At the age of 7, he enrolled at Gibbs School – a pre-preparatory school based in Kensington. Like his older brother Andrew, Edward also went to the Berkshire-located Heatherdown Preparatory School. In 1982, the young prince opted to spend two terms studying at Wanganui, New Zealand.

His love and passion for theater and television are what propelled him to achieve quite a level of success in the TV industry. He even established his own television production company, Ardent Productions, in the 1990s. After resigning his post from the company in 2002, Edward went on to become an active member of the royal family, assisting and representing his father in advancing so many social and community programs across the world.

Prince Edward is currently married to the first spouse, Sophie Rhys-Jones. They, the Earl and Countess of Wessex, have two children at the moment: Lady Louise Windsor and James, Viscount Severn.

On the day of his marriage, the Edward implored his mother to grant him an Earl title, “The Earl of Wessex”, instead of a duke title. The reason Edward chose a title lower than that of a duke had to do with his extreme admiration of the character Lord Wessex in the film “Shakespeare In Love”. At the time, the young and newly-wed prince liked the sound of the title, hence his mother conferred the Earl of Wessex on him.