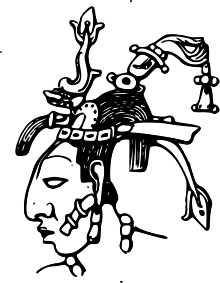 Pacal the Great – the Ajaw of Palenque

From a young 12-year-old boy to becoming one of the greatest Mayan kings, explore the birth story, reign and major architectural accomplishments of Pacal the Great – the famous Mayan king of Palenque.

Pacal the Great was born in March 603 A.D. to parents – K’an Mo’ Hix and Sak K’uk’. The name ‘Pacal’ in classic Maya language means “shield”. As a result of this, he was sometimes referred to as the “Sun Shield”.

Pacal’s early childhood was during a time when the people of Palenque were in deep conflict with another Maya state called Kaan. The Palenque had to defend against the onslaught of Kaan in 605 A.D., just two years after the birth of Pacal. The conflict, which dragged on for about eight more years, posed enormous challenges on Pacal’s family.

When he was around the age of thirteen, Pacal got married to Ix Tz’akbu Ajaw, a lady of high standing who descended from the Toktahn dynasty. The couple had three sons, one of them – K’inich Kan Bahlam II – succeeded Pacal to the throne. 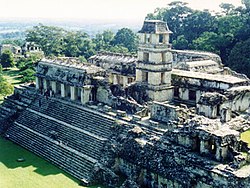 The Palace of Palenque

Pacal is believed to have inherited the throne when he was just 12 years old. Prior to his ascension to the throne, the people of Palenque were ruled by Pacal’s mother, Lady Sak K’uk’. And because he was only 12 at the time, his mother served as the regent until he attained the age of maturity.

Pacal’s reign witnessed the expansion of Palenque’s sphere of control. He is also credited with erecting a number of buildings and monuments in the Palenque’s capital.

Did you know: “Ajaw” was the title given to a reigning monarch or an important leader of the Palenque people?

About a year into his reign, some of his top most lieutenants were held hostage by Piedras Negras. The Palenque people retaliated by capturing Nuun Ujol Chaak, the leader of Santa Elena. Pacal would later force the people of Santa Elena to pay tributes to him.

Pacal was very active when it came to raiding other tribes and capturing prisoners. He is believed to have captured about half a dozen prisoners from Santa Elena in 663.

In his early 40s, he began spending quite a lot of resources on his construction projects. For example, he built a temple (presently known as El Olvidado) in 647.

His defining moment came when he expanded the Palace of Palenque, making the place one of the most magnificent sites in ancient history. Much of the expansion involved building more rooms on the existing structure. Those additional rooms were built to serve military and religious purposes. The expansion work took about two decades to finish.

By the time his reign ended, Pacal had managed to place the city of Palenque in a very strong position relative to its rivals. 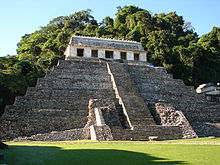 Pacal the Great’s tomb – the Temple of the Inscriptions

Pacal died in 683 A.D. He was 80 at the time of his death. It is unclear what caused his death; however, it’s most likely that he died of natural causes.

Pacal’s body was placed in gargantuan sarcophagus, which was then placed in a step pyramid called B’olon Yej Te’ Naah (“House of the Nine Sharpened Spears”). His resting place is now called the Temple of the Inscriptions.  Construction of the temple began about 10 years before his death.

The art work on the sarcophagus depicts Pacal in a dancing motion as he tries to dance his way out of the underworld (Xibalba).

Pacal’s children and heirs followed in his footsteps and held the city united and prosperous for quite a while. In 711 A.D., however, the city of Palenque was attacked by warriors from the city of Tonina. It is likely that the king of Palenque was captured and later executed. As for the city itself, it was most likely looted on several occasions, which ultimately plunged it into a decline. Around 820 A.D. the city was abandoned completely.