At the height of his nefarious and deadly profession, Pablo Escobar was considered one of the richest and most influential persons on earth. The Colombian drug lord had a vast network that spanned all across South America. In the world of drugs and crime, Pablo Escobar was an apex predator. For close to a decade, hardly anyone in Colombia dared go against Escobar or his Medellín Cartel. It took the combined strength of American and Colombian authorities to finally neutralize him on December 2, 1993.

These 12 Pablo Escobar facts reveal the complete story of one of the world’s most notorious drug traffickers.

Started from the bottom

Before the yachts, private planes, multi-billion dollar residences, and the fame, Pablo Escobar was just a delinquent young teen running the streets of Rionegro, Colombia. Escobar’s first interaction with the life of crime came when he took to selling fake diplomas. He was an expert forger, and he could make the fake diplomas, lottery tickets and report cards look like the real ones.

Shortly after those crimes, he moved on to peddling stolen stereo equipment in his neighborhood. Then he dabbled in the stealing of tombstones, which he would later sell. Pablo Escobar also engaged in car theft, a crime which earned him his first prison sentence in 1974. Hardened and toughed up by prison life, Pablo came out of prison unreformed. He quickly jumped into the illegal trade of drugs. Many of his friends and business mates often stated that Pablo was born to traffic drug. In less than a decade, he had successfully grown his drug trafficking organization into a vast empire. Before the age of 30, Escobar’s wealth was in the tens of millions of dollars.

The most ambitious and dangerous drug lord ever

Right from his nascent years as small town thief, Pablo Escobar had always seen himself making it to apex of criminal activities in Colombia. He once told a childhood friend of his that he was going to be the president of Colombia one day. Had it not been for the international pressure that was put on Colombia, Pablo Escobar could certainly have achieved that dream of his. His reputation as a fierce drug cartel made it impossible for anyone in Colombia to go against him. It is believed that he made his first $100,000 in life by kidnapping a Medellín business executive.

And once he got into the drug trafficking circles, Escobar was toppled a local drug kingpin by name Fabio Restrepo in 1975. From then onward, he expanded his illicit operations. The sheer amount of planning and strategizing that went into Escobar’s operation was none like ever seen before.

He smuggled close to 100 tons of “cocaína” every month

When all things went according to plan, Pablo Escobar was believed to have brought into the U.S. close to 100 tons of cocaine every month. The estimated value of those drugs was around $720 million. Investigations revealed that 80% of the cocaine in the United States came from Escobar’s cartel, Medellin Cartel.

He was somehow one step always ahead of the authorities. To evade them, he got creative and started smuggling the drugs in old plane tires. He also made sure that the pilots in those operations were well compensated for the risks that they took. Escobar reportedly spent about $500,000 on the wage bill of the cartel’s pilot.

Escobar also complemented his delivery channels by using remote-controlled submarines. He acquired two of those submarines to smuggle cocaine to the shores of the United States.

Eliminated anyone that got in his way

Pablo Escobar operated a policy called ‘Plata O Plomo’, which translates into “silver” (bribe) or “lead” (bullet). In order to get his operations running smoothly the drug lord either bribed his way through or simply murdered anyone he considered a stumbling block. He allegedly killed more than 4,000 people. Many of those people were local politicians or law enforcement agents.

He was issued out orders for the murder of presidential candidates, business executives, state minister, judges and journalists. His reign of terror resulted in the deaths of more than 1,000 policemen. No one dared came in front of his way, least they’d be sent quickly to their early graves. He gave out an order for the murder of Colombia Justice Minister Rodrigo Lara and presidential candidate Luis Carlos Galán.

On a daily baily basis, bags and bags of U.S. dollar bills poured into warehouses that Pablo Escobar had dedicated to store his ill-gotten money. Averaging around 15 tons of cocaine shipment, Escobar was raking in millions and millions of dollars daily.

It was reported by one of his accountants that the Medellín Cartel spent a staggering $2,500 monthly on rubber bands alone. He completely lost track of how much money he had stored in his well-guarded warehouses.

He was the 7th richest man in the world 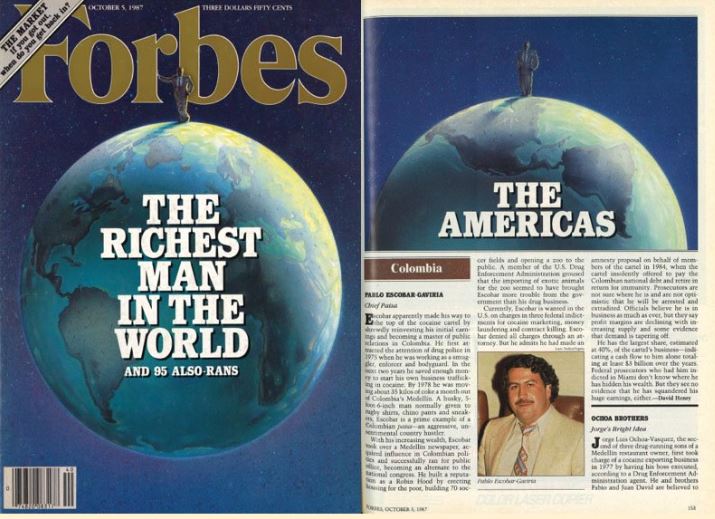 At the peak of his cocaine trafficking, it was calculated that Pablo Escobar was one of the wealthiest persons on earth. For about seven years running, he finished in the top 10 richest people on earth.

About 10% of his cash were either lost to the elements or eaten by rats. To put that into perspective, Pablo lost a jaw-dropping $2-3 billion annually. With his estimated wealth hovering between 25 and 30 billion dollars, Forbes Magazine ranked him as the seventh richest person on earth. Due to all that wealth, Pablo Escobar was simply invincible in not just Colombia but almost everywhere in the world.

At one point in time, he reportedly burnt $2 million so that his daughter Manuela could stay warm. This event happened while he and his family were on the run from the authorities.

After making billions of dollars from his illicit activities, Escobar took to the habit of literally giving out cash to the poor in his hometown. It was estimated that he handed several cash gifts to about 25,000 people. This was his way of securing the support and loyalty of Colombians.

Aside this, he spent a sizable amount of money in infrastructural projects such as roads, schools, libraries, hospitals and sports stadia. Soon, the locals gave him the name “Robin Hood”. Many people came to adore him because of the massive housing projects that he set up in Colombia.

As a reward for his “kind” gesture, he was elected to serve as a deputy representative in Colombia’s House of Representative of Colombia. However, he stayed in that office for just two years. The authorities worked hard to reveal his true nature to the Colombian people.

Zoo and lake at his luxurious residence

In the North-western Colombian town of Puerto Triunfo, Pablo Escobar acquired a 7,000-arce property called Hacienda Nápoles. The residence, which had a $3 million price tag, was home to several extravagant facilities, including a well-kept zoo, artificial lakes, a bullfighting arena, and gargantuan statues of dinosaurs. Pablo Escobar brought (smuggled in actually) in a number of exotic animals into the zoo. There were hippos, giraffes, ostriches, zebras, camels, and elephants.

For the entrance to his hacienda, Escobar placed a plane on top of the gates. It is believed that the plane was the very one he used in his first drug trafficking to the U.S.

In short, the place was nothing less than a fortress which hosted illegal business dealings and all night parties. Today, the place has fallen into disrepair; it has been overrun by refugees and hippos. Occasionally, the place attracts a number of tourists, both local and foreign.

Offered to pay all of Colombia’s debt

Escobar once offered to pay 10 billion dollars of Colombia’s debt. He wanted to use this as a bargaining tool to exert greater influence on the nation’s judiciary and executive branch.

Authorities in both the U.S. and Colombia have long suspected that Pablo Escobar may have been involved in the 1993 bombing of the World Trade Center. There still exists no evidence to positively link the bombing to him. One thing is however clear: Escobar certainly had the resources to pull off such a heinous crime. Perhaps it was done to silence a would-be-informant. Who knows?

In any case, shortly after the bombing, Escobar wrote a letter to the US embassy in Colombia, denying all those allegations.

In another very sad event, Escobar is alleged to have bombed the Avianca Flight 203 in 1989. Many claim that he did it in order to silence then presidential candidate Cesar Gaviria. Luckily, the future president of Colombia was not on board the flight. Sadly however, a total of 110 people lost their lives in that plane crash.

Pablo Escobar, on his own will, surrendered to the Colombian authorities in exchange for a reduced time in prison. Colombia’s then president Gaviria had simply had enough of the mayhem Escobar was causing. Therefore, a deal was struck with the drug kingpin. As part of the deal, Pablo insisted that he be allowed to build his own prison. Quite frankly, Escobar had the upper hand. The Colombian authorities quickly agreed to his demands.

The built prison – La Catedral – was far from a prison. It was simply a luxurious mansion on its own. It had several recreational facilities such as a spa, a nightclub, a gym, a sauna, a soccer field, etc. You could say that Pablo was literally on a vacation.

Even while in “prison”, Escobar continued to manage his cartel. He also took the lives of two cartel members. Angered by this, the authorities decided to move him into a less luxurious place. However, before the authorities could move him, Pablo Escobar broke free from La Catedral.

The U.S. was heavily involved in his apprehension and death

In 1993, authorities in the U.S. were hell-bent on apprehending Escobar. The U.S. funded and trained elite Colombian task forces to accomplish this mission. Additionally, the Colombian officials were aided by rival cartels. Many of these cartels had seen their business shrink because of Escobar’s vast empire.

The joint force – the Search Bloc as it was called – launched a wide-stretching manhunt for Escobar. By December 1993, they were hot on the drug king’s trail. Escobar was bunkered in at Medellín, celebrating his 44th birthday.

On December 3, 1993, the joint task force stormed into his hideout. Several shots were fired. This forced Escobar and his body guard to flee to the roof. Authorities cornered him on the roof. And in the ensuing shoot out with the Colombian forces, Pablo Escobar took three bullets: his leg, torso, and ear. Knowing how headstrong Don Pablo was, it is most likely that he committed suicide.