Most Powerful Warrior Women of the Ancient World

It was not often that women put on battle gear and picked up the sword to fight; however, whenever they did, it often meant that their region or city was on the brink of utter catastrophe. Rather than end up dying in their homes at the hands of the enemy or say much worse be taking as slaves, some brave women entered the battlefield and fought alongside their brothers, sons and husbands.

As it was often stated in the ancient world, war was never a woman’s business. Therefore, whenever an enemy saw a bunch of women warriors or say a female military commander charging her army against them, it turned out to be quite a confusing and terrifying moment for the opponents.

From the Iceni queen Boudica to Queen Zenobia of Palmyra, the warrior women and female military commanders that we about to explore could scare the living daylight out of the bravest of men of their times.

Artemisia I of Caria

Artemisia, Queen of Halicarnassus, fought bravely on the side of the Persians in the Battle of Salamis|Wilhelm von Kaulbach

Artemisia I of Caria was an ancient Greek queen and the leader of Halicarnassus (located in modern-day Turkey). She was famed for offering assistance to the Persian King Xerxes I in the late 5th century BCE. As an ally to Persians, she fought for Xerxes I during the second Persian invasion of Greece. She even commanded five ships at the Battle of Salamis in 480 BCE.

The famous Egyptian historian Herodotus described Artemisia as a very brave, decisive and astute military commander. Xerxes was very impressed by the way she handled herself during the battle.

Did you know: Artemisia I of Caria was named after the Greek goddess of the hunt and the moon, Artemis?

Cynane, the step-sister of Alexander the Great

Owing to the amazing accomplishments chalked by her half-brother Alexander the Great, it is no wonder that Warrior Princess Cynane often gets relegated to live in the massive shadow of Alexander the Great. However, Cynane (c. 358 – 323 BC) was a real force to be reckoned with in the battle fields.

Born to King Philip II of Macedon and Princess Audata, Cynane grew up in a very strong Illyrian culture particularly fond of shaping people into strong fighters. Additionally, Cynane was an exceptionally gifted fighter whose exploits in battles became legendary.

Rather be bound to the traditional roles for women, Cynane put her abilities to good use, riding along with her father’s army to battles. On several occasions, she fought side by side with her half-brother Alexander the Great during his conquests.

Bent on maintaining her power, Cynane marched her army into Asia in hopes of installing her daughter on the throne. Just before she arrived at Babylon, she was slain by Alcetas, the brother of Peridccas. Aggrieved by the death of Cynane, Alcetas’ soldiers rebelled and made sure that Cynane’s wish of having Adea and Philip Arrhidaeus co-rule Macedonia was fulfilled.

After toppling Queen Olympias, the woman responsible for the murder of Adea and Philip III Archidaeus, Cassander had Cynane, Eurydice and Arrhidaeus buried at the same place in Aegea. 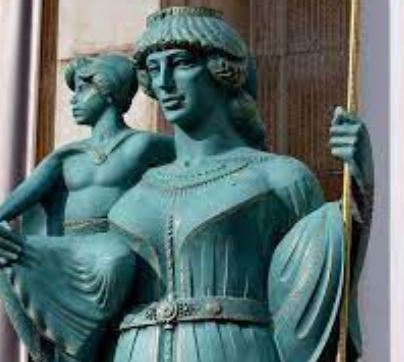 Reigning between c. 231 and c. 229 BCE, Queen Teuta was the renowned warrior queen of the Ardiaei tribe in Illyria (a region in the western part of the Balkan Peninsula). She was in effect the de facto ruler following the death of her husband Agron in c. 231 BCE.

As the regent for her infant stepson, Queen Teuta made sure that she intensified her husband’s expansion policy in the region. This brought her into some bit of confrontation with Rome. The Romans were also irritated by Teuta’s support of Illyrian pirates in the region.

Tensions reached an all-time high when Queen Teuta killed a Roman diplomat for simply shouting at her. The Roman Republic then went ahead to declare war against Teuta’s kingdom in 229 BCE, marking the beginning of the First Illyrian War.

Rome’s superior army proved too much for the Illyrian queen, forcing her to surrender and begin paying tribute to Rome. She spent the remainder of her life ruling a relatively smaller region.

Boudica was not your average British Celtic woman or queen. She was rather a fierce woman who would stop at nothing at inflicting huge losses on the people she believed terrorized her lands for years.

Regarded by many historians as the greatest warrior queen to hail from Britain, Queen Boudica rallied the armies of her Celtic Iceni tribe and other neighboring tribes to wage a huge uprising against the Roman army that was occupying Britain at the time.

Boudica’s husband Prasutugus had ruled that his kingdom be co-ruled by his daughters and Rome after his death. The Romans however reneged on that agreement and went ahead to cast aside Boudica and her daughters. Boudica and her daughters were publicly humiliated and beaten, with some of them even raped. At that point, there was nothing left for Boudica to do than to openly rebel against Rome’s occupation of her lands.

Described by many as a fierce woman with long hair, tall stature and very piercing eyes, the Iceni queen was seen by the Roman soldiers as a deranged and vengeful woman who would stop at nothing to right the wrongs inflicted upon her and Britannia by the Romans. Not only did she destroy the renowned Ninth Legion of the Romans, but she also laid waste to the Roman towns of Camulodinum (Colchester), Londinium (London) and Verulamium (St. Albans).

Mere sight of her charging in the field of battle astonished and terrified many Roman soldiers. However, in the end, the colossal power of Rome prevailed, crushing Boudicca’s army. According to historians, Queen Boudica committed suicide shortly after the defeat of her army.

Fu Hao of the Shang Dynasty 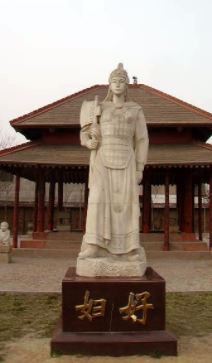 Fu Hao (died c. 1200 BCE), also known as Lady Hao, was one of the sixty wives of Emperor Wu Ding of the Shang Dynasty. Going against tradition of the time, Hao was also a high priestess and military general, leading the army to victory on many occasions. It has been stated that about 13,000 soldiers were under her command, making her one the fiercest military generals of her era.

The weapons found in her tomb* give credence to her status as an influential military leader who had control over her fiefdom just on the outskirts of her husband’s empire.

* Fu Hao’s tomb was unearthed in 1976 by Chinese archaeologist Zheng Zhenxiang. Located at Anyang, the tomb of General Fu Hao had been left intact for centuries.

Also known as Shamsi, Queen Samsi of Arabia got into a bloody confrontation with the Assyrian King Tiglath Pileser III after she refused to pay any tribute to the Assyrians. Another reason for the enmity between Shamsi and Pileser had to do with the former’s support of Damascus’ war efforts against Assyria.

Although her army was ultimately defeated by the Assyrian king, Samsi distinguished herself very gallantly in the field of battle. In the end, she had to flee and later resume payment of tributes to the Assyrian rulers.

Mattia Preti, Tomyris being presented with the head of King Cyrus, 1670–72

In spite of her gallant efforts during the battle, Cyrus was able to destroy large sections of her army; her son, Spargapises, even committed suicide because he was embarrassed by the defeat.

With nothing on her mind but vengeance, Warrior Queen Tomyris had another go at Cyrus, slaughtering his entire army before finally killing Cyrus. According to one account, Tomyris located the body of Cyrus and mutilated it several times. 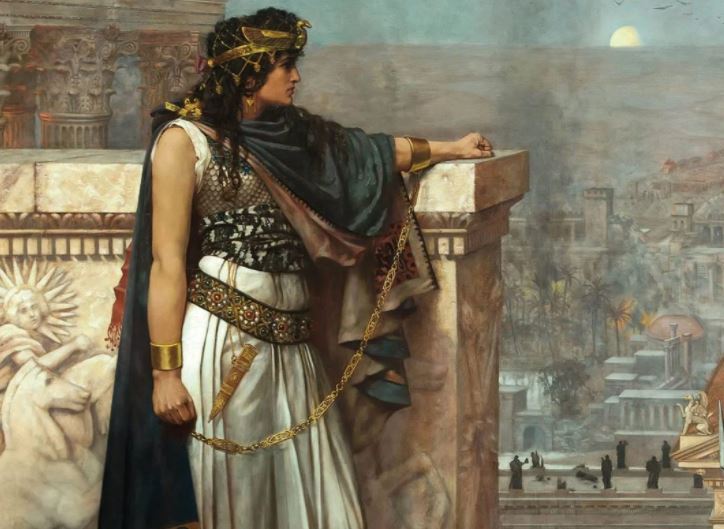 Zenobia (240 – c. 275 CE) was the fierce queen of the Palmyrene Empire in the third century CE. Her reign coincided with a period of immense unrest in the Middle East. In spite of that, Zenobia was able to use wits and a bucket load of determination to create for herself a thriving kingdom in Syria.

Described as the ‘Warrior Queen’, Zenobia constantly insisted that her family lineage could be traced to the Hellenistic Queens of Egypt, including the Cleopatras of that era.

Just two years after she became queen, she was able to lead her kingdom’s armies in the name of her son and conquer Egypt. She successfully drove the Romans out of Egypt. This feat of hers brought her into a fierce face off with the Roman emperor Aurelian.

According to Greek historian Zosimus, Zenobia was always an ever-present figure during battles, fighting very hard to protect her people and the region from Rome’s conquest.

Queen Zenobia had such an amazing aura that allowed her to rally the soldiers to victory. She could also draw people from all over the region to back her, making her a monumental figure across the Middle East. And although her empire did not exist for too long, early Islamic historians had very positive things to say about her in the centuries that followed.

Inspirational. Competent. Skilled. Brave. Those are some of the adjectives traditional Vietnamese sources use in describing Triệu Thị Trinh (ca. 222 – 248 CE). Also known as Lady Triệu, Triệu Thị Trinh is often hailed by modern historians as the Joan of Arc of Vietnam.

The Vietnamese warrior queen, who ruled in the 3rd Century, was responsible for halting China’s advance into her homeland. She was able to rally over thousand troops to briefly end China’s rule over her homeland.

Initially the men in her family tried to dissuade her from putting up a fight against the invading forces from China; however, Triệu was hell-bent on preventing her homeland from submitting to the invaders.

And for a brief time she was able to accomplish her goals; however, the Chinese forces came back much stronger and defeated her army. Rather than be enslaved and humiliated, Triệu Thị Trinh is believed to have committed suicide shortly after the defeat.

Traditional Vietnamese sources describe her as a very tall and imposing woman, measuring up to 9 feet tall. Some accounts even stated that she had 3-foot breasts that she tied behind her back during battle. It was also believed that she donned yellow robes and rode on an elephant to battle while wielding two very powerful swords.

Olympias – Warrior Queen of Macedonia and mother of Alexander the Great

Born into the tribe of Epirus (a region merged in between Northwest Greece and southern Albania), Olympias was one of the numerous wives of King Philip II of Macedonia and the mother of Alexander the Great. Such was her family’s fame that many people believed that they descended from the Greek hero Achilles.

Olympias’ uncle Molossian, the king of Arrybas, married her off to King Philip II of Macedonia in order to strengthen their alliance. Two years later, the royal couple were blessed with the birth of Alexander in 356 BCE.

Fearing that her son Alexander wasn’t going to succeed Philip II, Olympias might have murdered Philip and his other wife Cleopatra Eurydice and her children.

After Alexander the Great’s death in 323 BCE, she became an influential figure in the deciding the next person sit on the throne. Olympias gathered her army and marched into Macedonia in 317 BCE only to be met by forces belonging to Cynane’s daughter Adea Eurydice. Eurydice’s army pulled back upon seeing Olympias, the mother of Alexander the Great. Olympias then imprisoned both Eurydice and her husband Philip III Arrhidaeus. She had both Eurydice and Philip murdered.

Ultimately Olympias was overthrown by a close associate and ally of Alexander the Great called Cassander who opted not to kill her. Instead, Cassander looked the other way while Olympias was killed by the relatives of the people she had wronged or killed in the past.

You may also like: 10 Greatest Empires of All Time