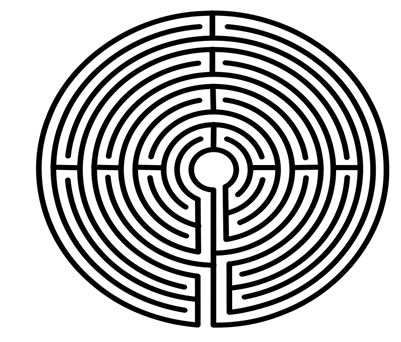 The term labyrinth originates from the Greek word “labyrinthos”, which portrays a maze-like construction with a sole pathway throughout. The underlying difference between a labyrinth and a maze is that unlike a labyrinth, a maze distinguishes itself by having numerous pathways and exits elaborately connected.  A labyrinth, on the other hand, is a unicursal complicated network of passages that has only one exit pathway, which is always linked to the center. By virtue of this, the labyrinth is  relatively easier than a maze. The etymology for the term labyrinth is related to the Minoan labrys or “double axe”. This is the representation of Crete’s Minoan mother divinity in Greek mythology.

Below is a presentation of the myths, stories and interesting facts surrounding the Labyrinth in general:

The Labyrinth of Crete in Greek Mythology

The greatest well-known labyrinth stems from Greek myths in the tale of Theseus, an Athenian prince. Daedalus constructed the labyrinth for King Minos on Crete to hold the dreaded Minotaur (half man and half bull). When Minos was contending with his siblings for the crown, he implored the Greek god Poseidon to dispatch a bull of a snowy color as a mark of the deity’s approval on his agenda. Minos was expected to give the bull as a sacrifice to Poseidon but, charmed by its splendor, chose to keep it and rather sacrificed his own bull which was of extremely less value.

Poseidon, infuriated by this ungratefulness, charmed the wife of Minos, Pasiphae, to become infatuated with the bull and copulate with it. The beast she begot became a Minotaur that terrorized the inhabitants of Minos by devouring the flesh of humans. After all efforts failed at containing the Minotaur, King Minos employed the designer Daedalus construct a labyrinth to contain the beast.

Since Minos was barely intent on serving his own folks to the beast, he burdened Athens with duty which involved sending seven youthful men and seven damsels to Crete annually. The seven youth from Athens were placed in the labyrinth in order to be feasted upon by the Minotaur.

The labyrinth of Daedalus was so convoluted, that he could hardly traverse it himself. But after he succeeded, King Minos trapped him, along with his son called Icarus, in a tall tower to stop him from exposing the classified information about the construction.

How Daedalus and his son, Icarus, escaped the Labyrinth

According to the myth, Daedalus broke out from the labyrinth with his son with the aid of bird feathers fastened collectively with wax. The father and son flew with the constructed wings out of the labyrinth. However, Daedalus’ son melted the wax that bound his wings together because he flew too close to the sun. He descended and sank into an ocean.

Theseus’ battle with the Minotaur in the Labyrinth 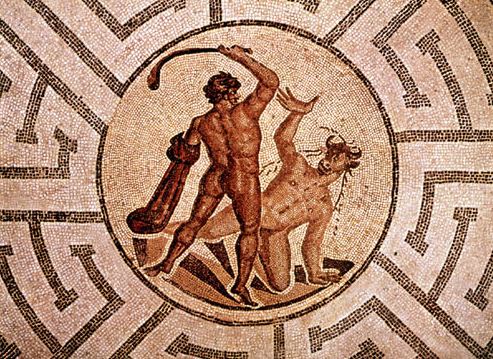 According to stories in the myth, Athens (some myths claim it was once every nine years) sacrificed 14 youthful individuals on a yearly basis to the labyrinth. Angered by this barbaric practice, Theseus, King Aegeus’ son, swore to extinguish the misery of the people. He stepped up to be part of the 14 youthful individuals and departed in the ship that had the customary black sails heaved in bereavement for the dead. Prior to his departure, Theseus told his father he would replace the customary black sails with white ones on the journey home, if he was victorious.

Before heading for Crete, Theseus had drawn Ariadne’s (the daughter of Minos) attention. She gained affection for him and clandestinely offered him a blade along with a string sphere. She informed him to fasten the yarn to the labyrinth’s aperture as quickly as he was in and, when he had slain the beast, he could then use the string to make his way back to the exit.

Theseus slew the beast, rescued the young individuals who came with him, and then he fled Crete with Ariadne. On their way back, Theseus deserted Aridne. In his hurriedness to get to Athens, he failed to remember to replace the customary black sails with the white ones. Aegeus, sighting the black sails coming back and filled with grief, jumped into the sea and perished. Theseus went on to succeed his father.

Hawara’s labyrinth was so remarkable that, it equaled all the marvels of the ancient times, reported by Herodotus. This labyrinth, an Egyptian temple division of a pyramid composite consisting of several courts constructed by Amenemhet III (12th Dynasty) in the era of the Middle Kingdom, which was from 2040 to 1782 BCE, at Hawara. This labyrinth was a morgue composite outstanding and more sophisticated than any other constructions up to that period. Strabo portrays the labyrinth as “a great palace composed of many palaces” and extolled it as “comparable to the pyramids” in magnificence.

It is accepted that Hawara’s labyrinth, like the temple facilities in Egypt, reflected the hereafter. The construction comprised of 42 halls which Strabo links with the figure of nomes of Egypt however, also consistent with the 42 Judges who determine the destiny of souls with Osiris, Anubis, Ma’at and Thoth, at the last judgment which happens in a place called Hall of Truth. Then, the labyrinth could possibly have been built to guide one through a puzzling maze, like the scenery of the hereafter portrayed in Coffin Texts to guide towards enlightenment.

This remarkable composite collapsed from deterioration at some unidentified point in time and was pulled to pieces; the fragments were then utilized in other construction developments. Zero is left of this spectacular architectural marvel today apart from Amenemhet III’s ransacked pyramid at Hawara. Faiyum Verner states that, “because of the early destruction of the complex, the original plan of the labyrinth cannot be precisely reconstructed”.

Some Very Interesting Facts about Labyrinth