John Milton, a 17th-century English poet and historian, produced many notable works that had profound influence on not just the English writers but also the English language itself.

Much of his work represented his political and religious point of view. Between 1632 and 1674, he wrote a number of poetry and prose which include the famed, “Paradise Lost,” “Paradise Regained” and “L’Allegro.”

World History Edu presents everything that you need to know about John Milton, a gifted poet and thinker who was described by English writer William Hayley as the greatest English poet of all time.

The eldest son of John Milton Sr., a composer and copyist, and his wife Sarah, this English poet was born in London on December 9, 1608.

Milton’s grandfather cut out his father from his will because his father had converted from Catholicism to Protestantism. His father was a known musical composer in London. And Milton had a great appreciation of his father’s musical prowess.

His earliest compositions were a couple of odes, including the Christmas ode “On the Morning of Christ’s Nativity”, which he wrote in his mid-teens.

Desiring to be a priest, John Milton enrolled in Christ’s College, Cambridge in 1625. Four years later, he earned his B.A. and in 1632 received his M.A. 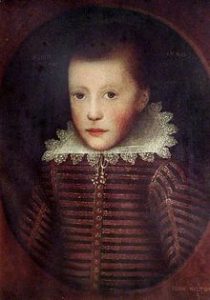 Milton abandoned priesthood and pursued a literary career. He wrote one of his famous books “Comus, a Masque” around this period.

Following the death of his mother and friend in 1637, he penned his pastoral elegy “Lycidas,” which overtime became one of the most renowned English elegiac poems. His poem Lycidas was written for his friend Edward King.

John Milton’s career as a prose and poetry writer covered three unique eras. His main “polemical” prose was written in the 1640s and 1650s, during the disagreement between the Church of England and the many reformist sects, including Puritans; and between the monarch and Parliament.

In March 1649, Milton became secretary for foreign tongues to the Council of State. His duty to the government, especially regarding foreign policy, is recorded by official correspondence, the Letters of State amongst others. Milton continued to write After Charles II was crowned.

While his impact as a prose writer was great, his poetry was even greater. He described his prose works as the accomplishments of his “left hand.” Like many of his prolific  literary contemporaries whose works bear much resemblance to his, Milton took advantage of his poetry to speak on matters bordering on religion and politics. He did the same with many of his prose.

Putting  himself in the same category of poets and writers whose works are ways and channels for expressing their voice and sentiments, he also employed the pastoral poem to represent his outlook on politics. By so doing, Milton worked towards fostering a civilized commonwealth, just like the polis of Greek antiquity or the cultured city-states in Italy during the artistic, political and cultural rebirth.

The year 1645 saw him publish his first collection of poetry, Poems of Mr. John Milton, Both English and Latin, much of which he wrote before he turned twenty years of age. The collection painted him as a rising poet, one who was armed with a plan and demonstrated his growth in various ways, including an excellent command over such ancient and modern languages as Greek, Latin, Hebrew, and Italian.

Through his works, he created awareness of various traditions in literature. His poems in the 1645 edition comprised various genres such as  paraphrase, sonnet, masque, pastoral elegy, verse letter, English ode, epigram, obituary poem, and companion poem.

Support for republican views and the “Good Old Cause”

Milton shared the Republican ideologies and argued in favor of the regicide of King Charles I of England in many of his books. He also expressed his support for the government of England in his 1652 book, Defensio pro Populo Anglicano.

Some of his works were also aimed at William Laud, Archbishop of Canterbury during the First English Civil War.

Two years later, he issued a pro-Oliver Cromwell book in response to a Royalist’s article. Cromwell was the first Lord Protector of the Commonwealth of England, Scotland and Ireland.

His work The Tenure of Kings and Magistrates in 1649 gave support to defending people’s liberties and was against the absolute power kings enjoyed.

In keeping up with his support of nonmonarchical government, his work Eikonoklastes supported the regicide of King Charles I and attacked Royalist tracts and works.

Milton wrote some works that argued for divorce to be permitted beyond the grounds of infidelity. This view of his was likely influenced by the rocky relationship he had with his first wife Mary Powell. The author tied the knot with Powell, who was about 17 years younger than him. Milton, a republican-leaning author and thinker, is said to have gotten frustrated by Powell’s royalist views.

Milton went on to produce more prose and poetry. He completed a very important work, Paradise Lost, an epic poem that tells the Biblical story of how mankind’s fell and lost favor with God. It recaptures the period Adam and Eve fell prey to the temptation of Satan and ate the fruit on the Tree of Knowledge leading to their banishment from the Garden of Eden.

The poem, regarded by most as Milton’s masterpiece, is written in blank verse and contains 12 books. An ambitious work, it has strongly appealed to generations for more than 350 years and its influence has spilled over to also every inch of the Western world.

John Milton’s works had profound influence on the English language and English writers, including William Wordsworth and William Blake.

First published in 1671, Milton in this poem tells the story of Satan’s tests on Jesus and details a philosophical dialogue between Satan and the son of God. Jesus, unmoved by the devil’s deception, passes the test.

These “companion poems” celebrate the  of the rural landscapes and the “busyness” of life in the cities. Milton wrote this poem in his twenties.

This poem was woven around the death of a wife. Many believed the subject to be Katherine Woodcock, who after having their baby died. Sadly, the baby died too.

On the Late Massacre in Piedmont

Milton described the terrible 1655 killings of the Waldensians in Piedmont by Charles Emanuel II in this poem.

Milton penned this sonnet at age 23. Though he has made a mark at Cambridge University, he felt he was disconnected from and left behind by his peers while he himself walked a lone path towards a great life. This poem expresses his consciousness of mortality and the passing of time.

His first published poem, this poem is an eulogy  Milton wrote about the life and works of William Shakespeare. 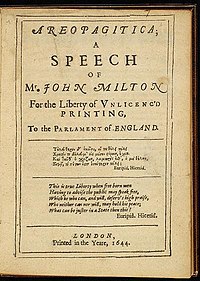 “Paradise Lost” wasn’t the only work that he was most renowned for. His 1664 prose polemic “Areopagitica” also brought him wide acclaim. The work strongly defends the rights of individuals and other civil liberties. Image: Title page of the 1644 edition of Areopagitica

Milton’s way of writing was distinctive, leaning towards a deeply philosophical style. His major technique  in “Paradise Lost” and “Paradise regained” were visibly impacted by the language of the Bible particularly, by the book of Palms and Revelation.

Milton’s subjects would greatly influence future generations of poets. Based on his book, “Order and Disorder,” the English translator and poet, Lady Hutchison, published a piece on the subject of good and evil. 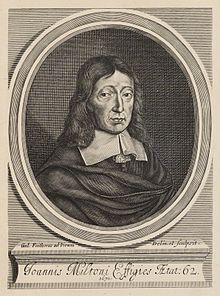 He penned works such as L’Allegro, On the Morning of Christ’s Nativity, and Il Penseros while studying at Christ’s College, Cambridge. Engraving by William Faithorne, 1670