There’s no other athlete in the history of the earth that has made a considerable impact in sports than Jesse Owens. Popularly known as the “The Buckeye Bullet”, Jesse Owens was a track and field athlete who competed at the 1936 Olympic Games, where he won four gold medals and broke two world records. His victories during the tournament blocked the then-German leader Adolf Hitler’s goal of showcasing Aryan superiority.

Owens was born in Oakville, Alabama to Henry Owens and Mary Fitzgerald. He was the youngest of ten children. When he was a young boy, he discovered his passion for running and started his track career in junior high. He received national interest when he equaled the then-running world record during the National High School Championship in 1933.

He attended Ohio State University, where he had a successful college track career, winning 8 individual NCAA championships during that time. Unfortunately, he wasn’t afforded certain luxuries due to racial segregation. 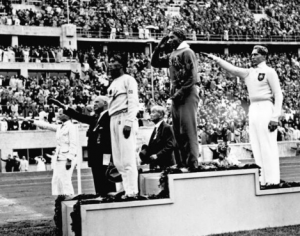 The room where Owens lived during the 1936 Olympics has been converted into a museum featuring pictures of his achievements and wins, as well as a letter from a fan requesting him to not shake hands with Adolf Hitler.

Owens had an extremely successful career, receiving numerous awards and recognition for his achievements:

Owens has been referenced in various pop culture phenomena over the past thirty years:

The 2006 novel “The Book Thief”, written by Markus Zusak had a character that was a fan of Owens.

In 2016, actor Stephan James played Owens in the feature film “Race.” That same year, another film “Olympic Pride, American Prejudice” told the story of Owen and 17 other Black American athletes on their journey to the Olympic games in 1936.

In the 2017 hit horror movie “Get Out”, the villain, Roman Armitage failed to qualify in the 1936 Olympics to Owens, inspiring him to begin kidnapping and stealing the brains of young black men.

In the satirical 2019 film “Jojo Rabbit”, the character of Adolf Hitler referred to another character as “a little female Jewish Jesse Owens.” 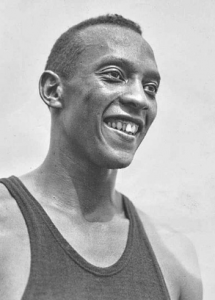 He married his childhood sweetheart Minnie Ruth Solomon. They welcomed their daughter, Gloria in 1932 and got married in 1935. They had two other daughters, Marlene and Beverly. They married until he passed away in 1980.

Owens was a chain smoker for over 30 years, picking up the habit when he was 32 years old. In 1979, he spent a lot of his time between hospitals after being diagnosed with lung cancer. He died in March of the following year and was buried at the Oak Woods Cemetery in Chicago.