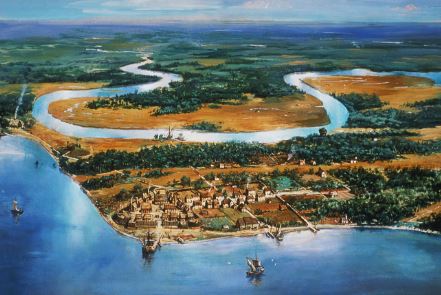 This article chronicles the somewhat tragic and violent history, significance, and key facts about Jamestown, an early American colonial settlement established by England in 1607.

Jamestown, England’s first permanent and thriving settlement in the Americas, was established on May 4, 1607 in present-day Virginia. The settlement, which was initially led by English Captain John Smith, would go on to boom for close to century before it was eventually abandoned for Williamsburg a few miles away.

The Jamestown Colony was England’s way of making an entrance into the Americas, after the Spanish (led by Christopher Columbus) had already started making their presence felt on the continent.  The original number of English settlers was in the region of 100. Financed by the Virginia Company of London, the settlers first made camp along the James River.

The history of Jamestown Colony is one that began with horrid accounts of starvation, murders, cannibalism, and diseases. There were also several deadly clashes between Native Americans in the area and the English settlers. But for the influx of new settlers (including women) from England with much-needed supplies, the Jamestown Colony could have failed catastrophically in 1610/1611.

Aside from its early trading activities, Jamestown was also the very place where Captain John Rolfe, Smith’s replacement, married a Native American princess called Pocahontas. The marriage brought a modicum of peace between the settlers and the Natives. In the decades to come, the colony expanded rapidly from James Fort to the east.

Up until the capital moved to Williamsburg (around 1699), Jamestown was the most vibrant place in Virginia with a lot of tobacco trading going on.

With the race to the Americas unequivocally won by the Spanish (i.e. Christopher Columbus’ famed journey to the region in 1492), England too wanted to profit from the resource-rich continent. The English went ahead and established the Roanoke Colony in 1587 on an island just off the shores of present-day North Carolina. With reasons unknown up to this day, the Roanoke Colony was a complete failure , vanished from existence in just under a few years.

Learning from its disastrous first settlement, England dispatched a second batch of sailors and settlers to the continent. King James I of England in 1606 put a London-based company, the Virginia Company, in charge of the expedition. Aside from setting up a new colony, the Virginia Company were tasked to look for valuable mineral deposits on the continent. And like Christopher Columbus, the English sailors wanted to find a safe passage to India in order to expand trading ties into those regions.

Landing and Composition of early settlers

The Virginia Company assembled a team of about 100 settlers (all men and boys), who were led by Commander Christopher Newport. The expedition set off in December 1606 on three ships – The Susan Constant, the Godspeed, and the Discovery.

Upon arrival in April 1607, they chose what is now the island off the coast of James River. The settlers quickly set up a governing team which included Captain John Smith. Three groups formed emerge: there was a group in charge of building houses, defense structures and storehouses; there was another group that took to planting crops; and the third group focused on investigating the minerals in the surrounding region.

The settlers came to call their new settlement James Towne (or James Forte), most certainly named after King James I of England. They built mainly houses and small stores to house food supplies and weapons. There was also a church in the settlement.

With the departure of Commander Newport to England, Captain John Smith became the group’s leader. Newport left for England to present a report on his findings to the king.

Considering the fact that it was a new settlement on a starkly unknown continent, the first settlers of Jamestown really struggled. Not only were they up against the elements, they had to contend with hunger and diseases. To survive, they had no option than to feed upon their horses, dogs, mice, rats and cats.

A significant portion of the settlers succumbed to typhoid due to the unclean (arsenic as well) water in the surrounding mosquito and bug-infested, swampy area. Out of the 100 or so settlers that arrived in May 1607, only about 38 survived as at 1608.

Of all the struggles that they had to endure, none was worse than the clashes they had with Native Americans in the region. Jamestown settlers had to always be on alert for Native American attacks. Those attacks predominantly came from the Algonquian tribes.

After the Native’s realized that the English were going nowhere, the chief of the Algonquain, Chief Powhatan, worked to restore peace between the two people. He and Captain Smith met up and discussed peace and trading terms in 1608. Due to the understanding that was reached, the English settlers’ situation got a bit better through trading with the Algonquains.

Captain John Smith made a return to England in 1609. In his absence, Jamestown struggled to cope with the challenges of the region. The biggest of those challenges was the devastating winter of 1610, termed as the “Starving Time”. The freezing conditions tore through the settlement, causing further hunger and deaths.

It is believed that the winter that year claimed the lives of at least 100 settlers. So severe was the winter that some settlers took to cannibalism in order to stay alive. We know of this because of the unearthed archaeological evidence from the area. Horrific accounts of this cannibalism were also contained in the diary group leader George Percy kept.

All hope seemed lost until shipments from England arrived in late spring of 1610. The ships brought in the much needed supplies. Aboard the ship was also Lord De La Warr, the colony’s first governor.

Lord De La Warr’s time as governor was rather a brief one due to his illness. After Warr’s return to England, King James I appointed Sir Thomas Gates as the governor of the colony.

Sir Thomas and his lieutenant Sir Thomas Dale held the colony together and kept it running under English laws. They two men brilliantly managed the relationship between the colony and the Native Americans. Unlike his predecessors, Sir Thomas was much tougher on the Native tribes. He and his men ravaged the lands and homes of the Algonquains, leaving scores dead. With this carnage came the construction of forts and more sophisticated walls around Jamestown.

The colony also started expanding, stretching along the James River all the way into New Town. They also got better at planting corn and other crops in the region. Gradually, they picked up a lot of vital survival tips and tools from the Algonquains.

Much of the technology exchanges between the Algonquains and the colony came right after the marriage between John Rolfe and Pocahontas. Rolfe was an influential member of the governing council of the colony. He was also an experienced tobacco planter. As for Pocahontas, she was an Algonquain princess, i.e.  the beloved daughter of Chief Powhatan.

The marriage brought about relative peace and prosperity to the colony. The colony thrived for decades due to the introduction of different forms of tobacco seeds brought from the Caribbean.

By 1619, there was a General Assembly up and running. Although, only male landowners were allowed to cast their vote, governance of the colony seemed to go really well. In the months to come, enslaved Africans hit the shores of Virginia.

The late 1610s saw the deaths of Pocahontas and Chief Powhatan. The deaths of those two, coupled with the English never-ending desire for new lands, resulted in strained relationship between Jamestown Colony and the Natives.

Chief Powhatan’s successor, Opechankeno, had grown extremely fed up by the English incursions into his land. He responded with brute force. In late March 1622, Opechankeno attacked Jamestown and killed close to 400 English settlers. That number represented about 20% of the settler’s population. While all that occurred, the English had to contend with deaths from diseases.

Realizing his prized American colony was in danger of going extinct, King James stepped in and absorbed Jamestown as a royal colony of the English Empire in 1624.

With Jamestown, Virginia, now under the control of the English Crown., more and more English settlers poured onto the continent. Great and bigger fortifications were also made to guard against attacks from Opechankeno and his tribe. Guns and other hardware flowed into the colony as well. All of those measures were enough compelling reason to force the Powhatans to sign a peace treaty, which saw them relinquish their lands to the English.

Although sporadic conflicts between the English and Native Americans continued to prevail, Jamestown Colony was never in real danger of being overrun by Native Americans. The English Crown had pumped enough men and resources to keep the colony relatively safe. With the exclusion of the Bacon Rebellion in 1675, nothing much hindered the progress of Jamestown and the whole of Virginia Colony. And in just under a year or so, Nathaniel Bacon’s rebellion was quickly put down by then-English king, Charles II.

So how did Jamestown get abandoned?

Jamestown in effect started going downhill around 1698. It started with the unfortunate destruction of the statehouse, which was razed to the ground by a fire incident. Owing to the destruction of the town hall, much of the administration of Jamestown moved to Middle Plantation, also known as Williamsburg. This move resulted in settlers gradually relocating to Williamsburg, and soon Williamsburg was proclaimed as the capital of the Virginia Colony. By the start of the 18th century, Jamestown had been left abandoned.