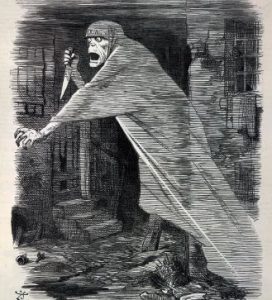 Very recently in the year 2019,  a gentleman by the name Aaron Kozminski was suspected of being the culprit in the Jack the Ripper case of 130 years ago, but this theory has been deemed not valid.  Who then was “Jack the Ripper”, the murderer who instilled so much fear in London between August and September 1888?

There was a time when Britain got overcrowded with people from all walks of life.  This was in the 1880s when people came from Ireland, Russia, and other European nations.

During this time, there was a parish- Whitechapel was the name. It was situated at the east end of London.

Lots of these people ended up in Whitechapel. The place was overly filled to the brim and this made the living conditions in the town a tar bit difficult.

The town became riddled with violence, stealing, attacks, drunks, and prostitutes. It is stated that around this time, there were over 1000 women involved in prostitution at Whitechapel and over sixty-four whore houses by 1888.

These vices had aggravated and there were these murders that gained popularity.  It was widely believed that these murders were perpetrated by Jack the Ripper, nicknamed, “Leather Apron” and “The Whitechapel Murderer”.

About the Murders in Whitechapel

These murders were tagged the Whitechapel murders. It is not really determined how many murders were carried out by Jack the Ripper, but there were about eleven murders around the same area within three years.

It is known that, when he attacks his victims (mostly women), he removes their genital organs, intestines, and throat and then he disfigures their faces.

The first woman who was murdered in the Whitechapel murders was named Elizabeth Smith. She was a prostitute at Whitechapel.

Elizabeth was a woman with two children who had lost her husband years ago. The attack happened between Bick lane and Osborn Street at Whitechapel.

It happened in 1888 on the 3rd of April.  She didn’t die immediately; she survived the attack which she said was done by three men.

The assistant manager of the place she was living at along with one of the people in the house sent her to the hospital, the next day she died and the doctor present then Dr. Hillier stated that attack had been brutal.

He noticed that a sharp object had been pushed into her vagina destroying some of the linings of her abdominal cavity. She was sexually abused and robbed.

The second victim was named Tab ram Martha. She was the youngest child of her parents. She got married but the marriage didn’t survive.

After the demise of her marriage, Martha got into an on and off relationship with with another man. However, three weeks after she left him, she was attacked.

Passers-by saw Martha’s body, motionless, around 3:30 am at dawn, but none of them bothered to approach her because they assumed she was just sleeping. It was around 5 a.m. when someone who lived there passed and noticed she was dead.

This happened on the 7th of August 1888.  The doctor at the coroner’s office  stated that she had been murdered around 2 am.

Martha had been stabbed over thirty (30) times all over her body with nine stab wounds to the throat.  Considering how she and Elizabeth died, the evidence did not support the claim that Jack the Ripper was responsible for these particular murders.  However, it was speculated that he did committed five out of the 11 Whitechapel gruesome murders. What is clears is that those two were not part of his 5 victims.

How were Jack the Ripper’s Victims Murdered? Who were the “Canonical Five”?

Whitechapel murders perceived to have been orchestrated by Jack the Ripper was dubbed – the “canonical five”. Below are some of the victims suspected to have been killed by “Leather Apron”:

Mary Anne Nichols – Mary was found dead at 3:40 am on Durward Street in Whitechapel on the 31st of August in the year 1888. When she was found, her throat had been slashed. There were two cuts to her throat. The lower part of her belly had been cut open with a knife. Mary had five children before her marriage got ruined.  Her husband’s excuse for leaving her was that she was into prostitution and was always drunk.  He was taking care of her until he found out she was into prostitution.

Annie Chapman – Annie’s body was found at 6:00 am on the 8th of September 1888.  She was the second victim of The Whitechapel Murderer. Her body was found in Spitalfields.  Annie’s murder was similar to Mary’s. Her throat had been slit also but in her case, the culprit removed her uterus. She was married to a gentleman from her mother’s family. Annie had three children with him.

Elizabeth Stride – Elizabeth, the killer’s third victim, was a prostitute as well. However, unlike the previous victims, she had not been married before. She traveled to London from Sweden where she got married to a carpenter thirteen years younger than her.  With Elizabeth’s death, however, only her throat had been slit. Her deceased body was discovered at 1:00 am on 30th September 1888.

Catherine Eddowes – She was also murdered on the same day as Elizabeth.  She had been murdered roughly about an hour after Elizabeth.  Catherine was born in Wolverhampton but moved to London with her husband.  They had three children.  After leaving him in 1880, she started prostituting to in order to pay her rent bills.  Her death was equally, if not more, as gruesome as the other victims. Her throat was cut, her face disfigured, and her intestines had also been pulled out and laid on her shoulder among other wounds as well.

Mary Jane Kelly – Jane was the fifth known victim of Jack the Ripper.  Jane’s body was discovered around 10:45 am on the 9th of November 1888. At the time of her death she was 25 years old. Aside from her age, there wasn’t much information about her before her death. She was found by a landlord who had come to collect an overdue rent. It was then that the landlord found her lifeless in her apartment. Her breast had been cut off, her belly had been ripped open and everything was moved to the surface of her thigh. Her neck had been cut down to the spine and her face was removed too.

After Jane’s death, it was presumed that the killer had stopped his crimes. However, several other murders involving victims such as Rose Mylett, Frances Coles, and Alice McKenzie also transpired during that period. In addition, the discovery of a female torso in September 1889 on Pinchin Street fueled rumors that the ripper had returned.

Another very horrifying aspect of the Whitechapel Murderer case was the numerous letters (over 700) that were sent by unidentified people to the police, media, and several other authorities. Some of these letters contained suggestions on how to apprehend the murderer, whereas others were alleged to have been authored by the killer himself.

Most notable among these letters was the infamous “Dear Boss Letter”, which was sent to a news distribution center – Central News Office in London. In this letter, the composer anonymously signed off as, “Yours truly Jack the Ripper”. However, many believe that the letter was actually written by a journalist and not by the murderer himself.