Malcolm X, also known as Malik Shabazz, was an African American Muslim leader and civil rights activist in the U.S.A. He was born in Omaha, Nebraska in May 1925 and married to Betty Shabazz in January 1958. Malcolm took active roles in the quest for civil rights for African Americans. His ideologies for black liberation were somehow different from that civil rights activists like Martin Luther King Jr. While Malcolm X included the use of violence in his preaching, Luther King Jr. never applied violence. Sections of the American public even described Malcolm X as a racist. 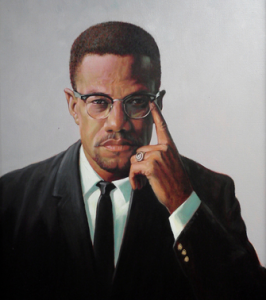 Malcolm X was also called Malik Shabazz. He spent 12 years being a member of the Islamic group, Nation of Islam (NOI).

Malcolm X lived in adopted homes after the assassination of his father. The young and radical man later moved to New York City and engaged in a lot of criminal activities. In 1946, he was sent to jail to serve a 10-year prison sentence following charges of theft and burglary. While in prison, Malcolm X joined a controversial Islamic group known as the Nation of Islam (NOI). He was with the NOI for 12 years before parting ways with the group in 1962. He strongly criticized the leader of the NOI, Elijah Mohammad.

After publicly denouncing his membership of the Nation of Islam in 1964, Malcolm X was threatened on several occasions by his former Muslim group members. They felt Malcolm X had betrayed them with his incessant condemnations of the activities of the group. In February of 1964, Malcolm X received a car-bombing threat from a high profile personality of Temple Number Seven.

A month later (in March), the head of the NOI (Mohammad Elijah) told Louis Farrakhan (a preacher from Boston) that people of Malcolm X’s kind deserved to be beheaded. According to Elijah, Malcolm X was a hypocrite, whose life must not be spared. As if the call for harm on Malcolm X wasn’t enough, an edition of Elijah’s speeches contained a cartoon character thought to be Malcolm X’s head bouncing on a screen.

The Federal Bureau of Investigations (FBI), in June of 1964, intercepted a telephone message which suggested Malcolm X was “as good as dead”. A few days later, an FBI informant learned that Malcolm X was going to be murdered. Around the same time, members of the NOI took a court procedure to confiscate the house of Malcolm X in Queens, New York. Before Malcolm X’s family could formerly vacate the building, after being ordered to do so, the house was blazed down by fire.

A personal assistant to Mohammad Elijah, by the name John Ali, predicted the death of Malcolm X when he said that no one goes scot-free after disagreeing with the dictates of the highly revered leader of the NOI. Louis Farrakhan (Louis X) wrote in December that death befitted a man such as Malcolm X. Malcolm reacted to the threats in September. He showed a photo of himself wielding a gun and looking through a window, ready to defend his life and family. 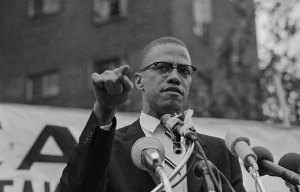 In early 1965, Malcolm X was fully aware of the danger that lay ahead of him. The Nation of Islam was now on a mission to eliminate him from the planet. He had broken away and formed his own organization – the OAAU (Organization of Afro American Unity).

On 21st February 1965, Malcolm organized a program to address 400 attendees. The venue was fixed at the Audubon Ballroom, Manhattan. Before Malcolm X could address the crowd, a participant shouted and commanded someone to remove his hands from his pocket. While Malcolm X and his security personnel attempted to control the commotion, an unknown assailant dashed forward and fired shots at Malcolm X. Two more men mounted the stage and fired more shots using handguns believed to be semi-automatics.

Malcolm X died shortly after been admitted at the Columbia Presbyterian Hospital. Postmortem examinations discovered 21 gunshot injuries in the chest, arms, and legs of the civil rights activist. The 39-year-old deceased was interred at Fern cliff, New York. About 14,000 to 30,000 people attended his funeral.

Malcolm’s murder came as a great shock to Americans and people around the world, including fellow civil rights activist, Martin Luther King Jr. King sent his condolence to the bereaved family through a telegram. In his consolatory message, he expressed his utter dismay at the cruel death meted out to Malcolm. He acknowledged that, even though he and Malcolm often disagreed on ways to fix the racially divided America, he always admired his contribution towards the press for civil rights.

Leader of the NOI, Elijah Mohammad commented that Malcolm X finally tasted what he ministered about. However, he claimed he wasn’t connected with the murder. The African continent mourned the passing of their icon. International sympathizers also shared their grief.

A member of the Nation of Islam by name Thomas Hagan was identified as one of those who attacked Malcolm. Two other accomplices were named: Norman Butler and Thomas Johnson (all members of the Islamic group).

In March 1966, the three people were apprehended and sentenced to life imprisonment. Thomas admitted his guilt but failed to testify that Johnson and Butler were part of the shooters. The suspected killers Butler, Johnson, and Hagan were granted parole in 1985, 1987, and 2010 respectively. Butler changed his name to Mohammed Abdul Aziz. Johnson and Hagan also changed their names to Khalil Islam and Mujtahid Salim respectively. The two broke away from the NOI and converted to Sunni Islam (just like Malcolm X did). Johnson and Butler never admitted playing any part in the murder.

Few days after the death of Malcolm X, debates sprang up about the brains behind the murder of Malcolm X. Many accusing hands were pointed at Louis Farrakhan, the NOI, the FBI, and elements in the New York Police Department. Witnesses confessed that the police failed to protect Malcolm X when the violence started.