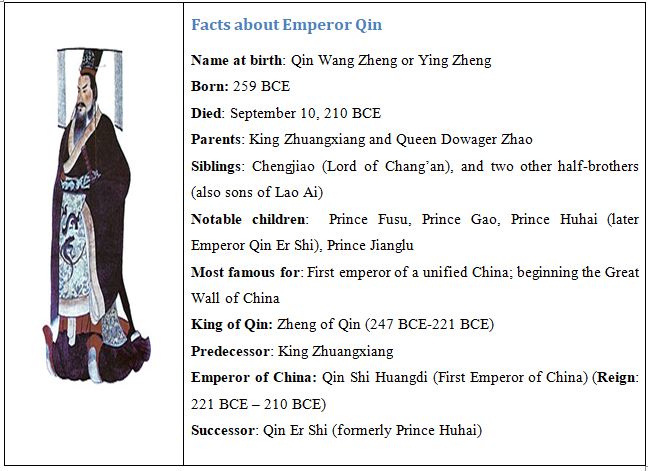 Emperor Qin (259 BC -210 BC) was influential in so many regard, having established the very foundation that Imperial China was based upon for about two thousand years. Here are a few major achievements chalked during his 11-year reign (221 BC – 210 BC): 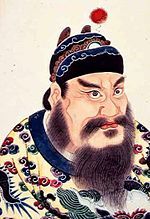 He was the eldest son of King Zhuangxiang of Qin, according to the Records of the Grand Historian, a book written by historian Sima Qian of the Han dynasty.

His father, King Zhuangxiang of Qin, was taken hostage by the Zhao State to guarantee the peace deal between Zhao and Qin.

His mother Queen Dowager Zhao (known formerly as Zhao Ji) was once a concubine of a wealthy businessman known as Lu Buwei. After obtaining permission from Lu, she went ahead and married Prince Yiren (King Zhuangxiang of Qin).

In some accounts, he was not seen as the son of King Zhuangxiang. Rather he was believed to be the son of Lu Buwei. As concubine of Lu, his mother was rumored to have gotten pregnant for Lu before getting married to King Zhuangxiang. Some scholars and sinologists beg to differ however, claiming that those statements about him being an illegitimate child of the king were simply attempts to slander him, especially when merchants were not too much of in Confucian society.

Zhao Zheng had a half-brother called Zhao Chengjiao who rebelled against him by pledging allegiance to the rulers of Zhao state. In response, Zheng executed his half-brother’s allies and families in the kingdom.

After an unknown person inscribed into the remains of a fallen meteor that Emperor of Qin would die and his land subsequently divided, Emperor Qin Shi Huangdi executed all the people in Dongjun, the place where the meteor fell.

Prior to Zhao Zheng’s coronation as king of the State of Qin, Lu Buwei was banished from the kingdom as a result of a shady dealing with Queen Dowager Zhao.