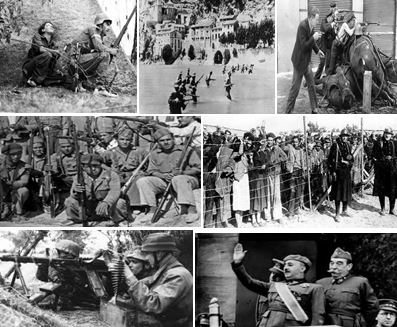 Causes and Timeline of the Spanish Civil War

Peace is not valued until war comes knocking at the door. The years between 1936 & 1939 were very bloody for Spanish citizens. During that time interval, the civil war in Spain killed more than 500,000 people. This huge loss signals how intense and bloody the Spanish Civil War was.

But what were the causes of this bloodbath in the Spanish lands? Here, we dig into the matters surrounding the ignition of this destructive Spanish Civil War and major events in its timeline.

Causes of the Spanish Civil War

Exploding in July 1936, the war in Spain soiled the 20th century; it was among the bloodiest wars ever to take place on the European continent. As the clock ticked further, humanity had to forcefully understand that the Spanish Civil War wasn’t only meant to be fought by Spanish citizens – foreign countries such as Soviet Union, Portugal, Italy, and Germany also got involved in the war.

On causes of the war, numerous factors came into play. But the most fundamental cause had a lot to do with the irresponsibility of the Spanish government. The country’s political factions had a problem with the operations of democracy.

At the turn of the 19th century, Spain wasn’t unified and stable. After its defeat during the 1898 Spanish-American War, Spain’s monarchy struggled with economic hardships. As a result of this, power occasionally lied in the hands of the military. Furthermore, various secular groups who supported anarchy and communism dreaded the growth of the Catholic Church. On the other hand, the elite populace was more economically sound than the other social classes, hence they saw communism as a threat to their wealth.

In the early 1930s, increased division and disparity among Spain’s social classes notched the country to a tipping point. In addition to the various political strife, the Catalan region in the northeast of the country wanted a complete breakaway from Spain; something that the central government wouldn’t raise a finger. The widespread division of Spain according to ideological and social lines, made possible the eruption of the bloody war that rocked the country to its core.

Here is a summary of the root causes of the Spanish Civil War:

Spain maintained neutrality during World War I. But that didn’t give it peace nor prosperity. World War 1 ended with a major economic disaster. Both the poor and the employed class struggled to get their daily bread.

Poverty led people to group themselves along communist lines backed by anarchists. In rural communities, stronger peasants would do anything to succeed such as confiscating lands. The elite class could feel the bells of communism ringing close to their properties.

Meanwhile, monarchist leader and dictator Miguel Primo de Rivera couldn’t do anything to support the poor masses after coming into power in a 1923 coup. Rivera and his troops took power from King Alfonso XIII, but his failure to properly govern the people led to conflicts and divisions in Spain.

In the 1930s, characterized by a catastrophe in every sector of the world, the Great Depression dealt a big blow to Spain which was already in ruins. Unemployment rose high to the skies. General Rivera did not have the slightest clue on how to manage Spain’s financial struggles. In the end, the army lost faith in him, forcing his resignation in the midst of troubles.

A Spanish election in April 1931 ended with a resounding Republican victory. This victory saw Spain become a Republic, and the monarchy was discarded. However, the emergence of the new republic wasn’t a match for the myriads of problems that infected the nation.

The Spanish regions of Catalonia and Basque were interested in acquiring their own Independence. At that time, the Roman Catholic Church had a noticeable influence in Spain – this kept the Catholics at arm’s length from the Republican government.

To add fuel to fire, government realized that the military had way too much power which must be reduced immediately – army officers were forcefully retired from service.  The increased hardships also confused the new government, leaving them with dangerous options on their table.

Mistakenly, the government started targeting the comfort of the privileged classes, including Catholics, military men, industrialists, and landowners. By stepping on the wrong feet, resistances began to mount against the government. Political parties were formed with ulterior motives.

As early as 1932, military coup attempts led by Manuel Azana were made on the Republican government, but they were unsuccessful. In January 1933, tensions further escalated when government troops fatally shot 25 people in an attempt to arrest them. Additionally, the killing of Calvo Sotelo (of the right-wing) on July 13, 1936, wasn’t taken lightly. 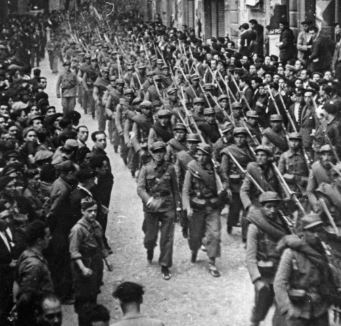 Causes and timeline of the Spanish Civil War

Timeline of the Spanish Civil War

July: Uprisings in Spanish Morocco and other places, followed by the dissolution of the regular army. Adolf Hitler (Germany) supported the Nationalists (the rebels). The Soviets backed Republicans. Italy flew Franco’s army to Spain’s mainland.

March: General Franco aborted Madrid invasion because Italian volunteers were defeated in the Battle of Guadalajara.

April: Bombs from the air left Guernica in tatters.

May: Barcelona weakened by the fallout of Republicans.

August: General Franco’s regime got recognition from the Vatican.

May: Franco called for a complete surrender of Republicans.

July: Republican army weakened following the Battle of the Ebro.

March: Madrid, the Spanish capital, bowed down to General Franco.