Ancient Sumer: 10 Major Facts about the Cradle of Human Civilization 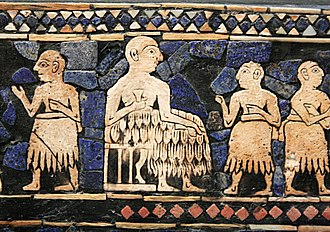 Ancient Sumer – Enthroned Sumerian king of Ur, possibly Ur-Pabilsag, with attendants. Standard of Ur, c. 2600 BC.

Ancient Sumer was an ancient Mesopotamian civilization famed for being the birthplace of human civilization. It’s been confirmed that the Sumerians were the first-known people to establish cities and have thriving system of governance. Below is a presentation of 10 interesting facts about ancient Sumer, one of the most eminent ancient civilizations to emerge from the Mesopotamian region.

Located in the southernmost region of ancient Mesopotamian (present-day Kuwait and Iraq), the name “Sumer” was an Akkadian word which means “land of the civilized kings”. In some cases, the inhabitants of the region preferred to describe themselves as “the black headed people”.  On other occasions, they were known as Kengir, which means ‘Country of the noble lords’.

Archaeological findings from the area have also revealed that the Sumer people were described as “the land of the black headed people” or the “Black Headed Ones”. According to the Book of Genesis in the Bible, the land of Sumer was known as Shinar.

It’s been estimated that the first inhabitants of the Sumer area arrived about 6500 years ago. It is not improbable that human presence and activities started centuries or even a millennia before that.

Archeologists have also stated that the first settlers were most likely not Sumerians. However, it is unclear as to what their origins were. In any case, those first settlers, the Ubaid people as they are known today, are believed to have settled on the mound of al-Ubaid as ruins and excavations on the mound revealed evidence of a thriving community. These proto-Euphrateans are believed to have benefited a lot from the Euphrates River as they gradually became a well-established agrarian society.

Ancient Sumerians held the belief that prior to the emergence of their civilization the gods wrestled with and defeated chaos and other legions of darkness. Following the victory, the gods elevated humans to an important role by placing them in charge of the things that were created. Ancient Sumerians believed that the humans were tasked to properly maintain the things that were bequeathed to them if they were to avoid chaos and disaster from engulfing the world.

Some of the oldest recordings in world history

It has been stated that the first record of a Sumerian king was on Etana of Kish. This king is believed to have ruled in the third millennium BCE. His name, which means “he who stabilized all the lands”, sheds light on how extremely important the Sumerians viewed their rulers, viewing them as the representatives of the gods who steered the people away from darkness.

The ancient Sumerians believed that the early gods bestowed upon them a number of gifts, including the ability to form civilized cities and use a host of agricultural techniques to their advantage. After receiving those gifts from the gods, the Sumerians went ahead and established the city of Eridu. From the city emerged order and human civilization as we know it.

Archeologically speaking, the Sumerian city of Uruk is generally seen as the world’s oldest city even though the ancient texts say it was Eridu.

Sumerians invented a number of things

By the mid-4th millennium BCE, the Sumerians had invented writing. The civilization is also credited with the invention of other things such as the sail boat, agricultural techniques and the wheel. Owing to how well-organized their city-states were, the Sumerians were probably the first people to invent governance and city administration techniques.

Early Sumerians had rulers that were priest kings, i.e. ensi. However, with the passage of time, those rulers came to be known as ‘big man’ or Lugal. This began around the Early Dynastic Period (2900-2334 BCE). This title perfectly fits considering the fact that the Sumer rulers had control over vast areas and properties, including fertile farmlands.

Conquered by Sargon of Akkad

However, with the passage of time, the Sumerian King Lugal-Zage is said to have lost his throne to his gardener, Sargon of Akkad, who then went on to found the Akkadian Empire (c. 2334 – 2154 BCE).

The Sumerians are often considered the ‘firsts’ in history

The Sumerian Renaissance period or the Ur III Period (2047-1750 BCE) is known as the the Third Dynasty of the city of Ur. This period saw the Sumerians make huge advances in culture and religion.  The period also witnessed powerful rulers or kings of Ur, for example Ur-Nammu (the middle part of the 21st century BCE) and Shulgi (r. 2029-1982).

Art and technology flourished, turning Sumer into a full-fledged civilization. As a result, they are credited with being the ‘firsts’ in history. For example, they were the first-known people to have stories about a messiah. Also the first flood stories emerged in Sumer. They were also the first known people to have stories about a dying and resurrected god. The first love song, first aquarium and first funeral chants were developed in ancient Sumer as well.

Sumer had some of the largest cities at the time

From Uruk to Ur, the ancient Sumerians had some of the biggest cities of the era. It’s been stated that those major cities had a temple raised in honor of a particular patron deity. The cities varied in sizes and population. Uruk was however the largest and most prosperous. Other famous cities of Sumer included Eridu, Larsa, Isin, Adab, Nippur and Kish.

Eridu held a lot of importance to the Sumerians as it was seen as the first city established by the gods for humans.  Uruk was believed to have up to 80,000 inhabitants at the time. In all the entire Sumer population was in the region of half a million to about a million.