Also known as: King of the English

Most famous for: Quelling the Viking threat; his victory against the Great Heathen Army in the Battle of Edington (878)

Achievements by Alfred the Great 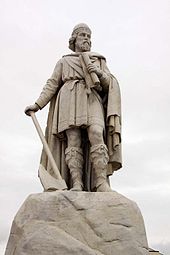 The following are some of Alfred the Great’s stellar accomplishments:

Restored his depleted army to fight against the Vikings

In May 878, Alfred the Great marched his army to Egbert’s Stone and was received by a thundering applause from his people. The king was in the process of marshalling an offensive against the Great Heathen Army of the Danes. He expertly drew support from a number of lords and community leaders from various towns (burhs).

Alfred successfully secured the support of his thegns (aristocrats and senior noblemen in Anglo-Saxon England), ealdormen (high-ranking officials from the various shires), and other noblemen. It’s been stated that he was able to secure fyrds from three shires. Fyrd was a term given to Anglo-Saxon army that were primarily made up of freemen tasked to defend their respective shires. The fyrds were funded from the pockets of each lord. However, the core of the fyrd usually comprised apt soldiers.

The Great Heathen Army was led by a Dane known as Guthrum. Alfred’s foe, Guthrum, had conquered the likes of East Anglia, Northumbria and Mercia before crowning himself king of the East Angles. Guthrum was confident about conquering the last standing Anglo-Saxon kingdom, the Kingdom of Wessex.

However Alfred had different plans; the Wessex king’s army fought bravely, forcing Guthrum and the Danes to fall back to their base at Chippenham. Alfred then laid siege to the stronghold of the Danes and starved them into capitulating. After fourteen days of misery and starvation, the Danes sued for peace, which came to be known as the Peace of Wedmore.

Signed the Treaty of Alfred and Guthrum 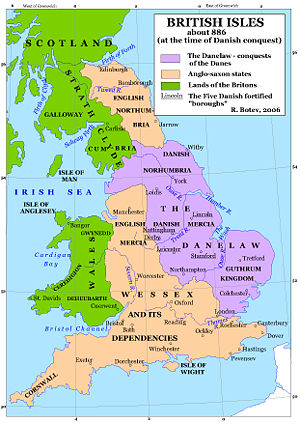 Alfred the Great | Map of Britain in 886

Following his historic win against the Great Heathen Army, Alfred forced Guthrum and other high-ranking members of the Danes to be baptized at the king’s court at Aller. Under the terms of the Treaty of Wedmore, Guthrum was also obliged to leave Wessex. Alfred took in Guthrum as a son, allowing the Dane to rule the kingdoms (East Anglia) he had earlier conquered. Alfred also went into trade negotiations with the Danes.

On the back of the Treaty of Wedmore, the two kings signed a formal treaty called the Treaty of Alfred and Guthrum. What the treaty did was to set the boundaries between the territories of Alfred the Great and East Anglia’s king Guthrum.

The two kings carved up Mercia and incorporated it into their respective kingdoms; Alfred took western Mercia while Guthrum took possession of eastern Mercia. The latter’s kingdom was called  Danelaw.

Following the peace treaty, Guthrum never had any skirmish with the Kingdom of Wessex until his death. The relative peace between the two kings allowed for Wessex to prosper economically and intellectually.

Did you know: the territories of Mercia that Alfred incorporated into his kingdom included the Mercian city of London? 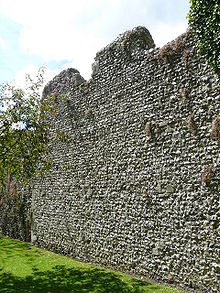 The walled defense round a burh.

Much of his restructuring came during the peaceful times he had with the Danes. This was around the time that Guthrum was king of the Danes in Danelaw.

It’s been stated that King Alfred picked little bits of military strategy from Charles the Bald while he was on a visit to Rome. Alfred came out with an improved way of taxing his people. He then used the taxes to carry out his restructuring of the military, making his standing army more mobile and robust.

Alfred increased the number of fyrds – an Anglo-Saxon army that were tasked to defend the shires (the burhs). He reorganized the way the fyrds operated, allowing for greater recruitment and conscription. The fyrds were funded with taxes levied on the lords. Those taxes were in turn determined in terms of the produce from the lands of those lords.

Another important source of funding for his army came from the fines (fierdwite) he imposed on people for avoiding military service.

King Alfred invested quite a lot in ships that could easily navigate the estuaries and rivers. In the mid-890s, he started building a small fleet that comprised long ships. Alfred’s ships were built to about twice the size of the warships of the Vikings. He was following in the footstep of a rich tradition of shipbuilding by the Anglo-Saxons.

Alfred’s ships were not only bigger, but they were quicker and more stable at sea than the ones possessed by the Vikings. It’s been stated that he drew a lot of inspiration from the models and designs of Greaco-Roman warships. The goal was to make warships primarily fit for fighting instead of navigation. With this strategy, he was able to halt the advances of the Viking raiders on sea even before they could make contact on land.

All in all, there were about 33 towns (burhs) that Alfred made sure to fortify. He built the system in such a way that the army could easily be deployed from one burh to another to fend off any invasion. The burhs were so interconnected that only about 19 miles (30 kilometers) separated them apart.

The spine of Alfred’s Burghal system was the Burghal Hidage – contributions from each lord or burh. Those contributions could come in the form of money, soldiers or arms. Alfred needed close to 30,000 soldiers to keep the system running effectively. That figure translates into about 25% of the free men in Alfred’s kingdom.

Linking these burhs were proper road networks, which were used by the army for easy transportation or deployment from one burh to another. All of these infrastructures made it very difficult for the Viking invaders to strike a burh, much less carry their stolen booty out of Wessex. And even though maintaining the system was quite expensive, as it placed immense burden on the nobles and lords, the system proved very effective in quelling or containing Viking invasions.

Also known as the Legal Cod of Alfred, the Doom Book was a set of codes compiled around 880s/890s by Alfred the Great. The codes were largely based on codes from the reigns of three Christian Saxon kings: King Ine of Wessex, King Æthelberht of Kent, and Offa of Mercia.

In the nutshell, the Doom Book sought to establish Christian law in the Kingdom of Wessex. These codes were largely underpinned by the Ten Commandments in the Book of Exodus. Described as a divine legislation that his people ought to abide by, the law codes require that the punishments for injuries caused be payment of monies, i.e. compensation for injuries.

Treachery was the only crime that could not be compensated with money. Treachery to a lord or the king was tantamount to betraying God. The Code of Alfred mandated that everyone love his lord as himself. By relating the love of a secular lord to the love of Christ, King Alfred was able to establish an ideological manifesto of divine kingship.

Alfred the Great’s advice to his judges

The Doom Book, however, contains quite a number of contradictions. Its lack of practicality made it sorely unsuitable for lawsuits. Regardless, Alfred always admonished his noblemen, bishops and ealdormen to steer clear from unfair judgements. He had a hands-on approach to legal matters that it was not uncommon for him to review judgments pronounced by ealdormen and reeves. Unjust judgments were overturned.

Alfred also encouraged his judges to be literate and at all times pursue wisdom. He believed that knowledge of the Biblical scriptures would bring about fairness in the legal system of Wessex.

Did you know: The Dōmbōc comprised 120 chapters, a reflection of the number of years that the Bible says Moses lived?

Taking several notes from the reign of Charlemagne the Great and the Carolingian renaissance, who lived a century before him, Alfred worked extremely hard to increase literacy in his kingdom. He sought to do this through culture and religion.

Perceiving the Viking raids as punishments from God for abandoning God’s commandment, Alfred encouraged religious scholarship in Wessex. He lured clerical scholars and monks from Mercia, West Saxon and Wales into his kingdom. By so doing, he was able to improve the literacy of his court.

He also worked hard to improve the governance of the church by promoting sound episcopacy. Office holders that were reluctant to acquire knowledge were swiftly removed. He regarded himself as responsible for not just the material welfare of his subjects, but also the spiritual and intellectual welfare of his kingdom. Monasteries at Shaftesbury and Athelney were built to advance his goal of training more pious, learned and trustworthy bishops and abbots.

Saddened by his lack of proper education during his childhood, Alfred made sure that his children and children of nobles received the best form of education possible. He set up court schools to tutor his children in English writing and liberal arts. Many of the scholars in the court schools came from across Europe. There was the likes of Grimbald and John the Saxon from Francia; Plegmund, the archbishop of Canterbury; and Bishop Waeferth of Worcester. Famous of them all had to be his biographer Asser, from St. David’s in Wales.

Alfred believed that a nation’s prosperity got stifled when the nation turns its back on God. With that in mind, he encouraged Christian scholarship. He held the opinion that not promoting learning caused the wrath of God. Therefore, he made sure that books that were Latin were translated into English and made available to every bishop in his kingdom. Notable translations include Pastoral Care and Dialogues both written by Pope Gregory the Great.  He believed that those translated books were necessary for all men to know, making sure that all bishops had a copy of those translations. 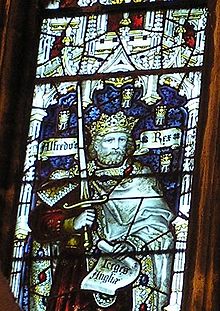 In his mind, an ignorant clergy caused both physical and spiritual decay. Image: Alfred the Great depicted in a stained-glass window of in Bristol Cathedral (c. 1905)

Following Alfred the Great’s famous win against the Danes and the Great Heathen Army, he worked hard to bring the Anglo-Saxon people together. Although, he still had to contend with a number of raids by independent Dane raiders, he spent a great deal of time laying the foundation for a future England.

After taking control of the city of London, he gave it to Æthelred’s, his son-in-law and ealdorman of Mercia.

With death of Guthrum in 889, several powerful warlords fought each other to fill the power vacuum. Alfred suffered immensely from the Guthrum’s death, as the Danes resumed hostilities against Alfred’s kingdom in 892/893. The Danes’ goal was to conquer England and settle in the region, as they came along with their children and wives.

Alfred and his eldest son Edward defeated the Danes at Farnham in Surrey. By 896/897, the Danes had run out of steam and given up their attempt to unseat Alfred in Wessex. Alfred’s status as the great Anglo-Saxon king of the time was confirmed with several precious gifts he received from Pope Marinus.