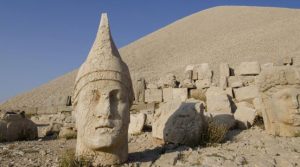 The name “Mesopotamia” is commonly associated with the phrase “the Cradle of Civilization”. But have you ever wondered why that is so? What exactly goes into being civilized? And how did Mesopotamia become the birthplace of our civilization? To answer these questions, worldhistoryedu.com has prepared 12 important facts about ancient Mesopotamia.

Ancient Mesopotamia was not a unified group of people under one ruler. Instead, Mesopotamia refers to a region that housed groups of independent settlements and city-states with slightly similar cultures and beliefs. For example, the Sumerians and Akkadians did share similar social customs and laws, but that does not mean that they were part of a bigger empire under an overall ruler. Therefore, when we talk about Mesopotamia, the idea is that we are referring to an ancient region on the eastern side of the Mediterranean. In modern terms, ancient Mesopotamia’s region would occupy places in Iraq, Iran, Syria, and Turkey.

Mesopotamia was the first to prioritize literacy

The Sumer people that lived in the southern region of Mesopotamia invented a pictograph form of writing in the 4th millennium BCE. Gradually, this form evolved into the famous cuneiform of writing. The utility in inventing a form of writing stemmed from their need to keep records of the goods that were traded among themselves. Also, there had to be some form of record keeping for the various city administrators and rulers in order to keep track of taxes and other religious artifacts. It was through writing that the region’s latter rulers and kings communicated their ethical codes of conducts and laws.

As we shall see below in Mesopotamia fact number six, Mesopotamia was also home to several inventions in agriculture, military weapons, and academic disciplines.

The third important fact about ancient Mesopotamia is that the region was the epicenter of Polytheism. Considering the fact that we are dealing with a 4000 BCE civilization, this should not come as a surprise. Anthropologists and historians believe that they had somewhere between 1000 and 1500 deities in the Mesopotamian pantheon. Examples of major Mesopotamian gods are Anu, Enlil, Enki, Utu, and Nanna.

Mesopotamia’s explanation of creation held the belief that in the beginning, the gods and demons fought for dominance. According to them, after eons and eons of years, the Mesopotamian gods and goddesses came out tops. But the chaos was not entirely annihilated. It was simply suppressed for a time. It was then up to men to perform religious rites and sacrifices to keep these bad spirits at bay. By so doing, the Mesopotamian priests believed that the world would remain in a perfect balance.

The legal system of Mesopotamia could easily pass for a modern-day legal system. The fact that they allowed for reasonable equality of rights for both men and women as far back as 7,000 years ago is astonishing. In most areas of the society, women were treated in a relatively equitable and fair manner. They could enter into contracts, make business deals, buy and own properties, and they could even legally divorce their husbands on the grounds of infidelity.

According to the timeline of ancient Mesopotamia, there is evidence that  King Hammurabi’s (r. 1792-1750 BCE) famous Hammurabi Code, to a great extent, guaranteed the protection of women from unfair treatment. Everything from marriage, contracts, domestic issues, religious ceremonies, and civic duties were vividly stated in Hammurabi’s code. The code followed “an eye for eye ” principle. What this means is that perpetrators of crime were given equal (or even severer) punishment based on the offense that was committed.

They were pioneering inventors

Historians credit the invention of the wheel to the Sumer people of Mesopotamia. The wheels were primarily used in the construction of two or four-wheeled wagons that facilitated easy movement of goods among city-states such as Uruk, Kish, Ur, Umma, and Lagash. This discovery was made by British archaeologist Sir Leonard Woolley in 1922 CE.

Other pioneering works of Mesopotamia were in sails and sailboats, irrigation, wine, time demarcation (seconds, minutes and hours), beer, and a host of religious rites that would be picked up by latter civilizations. Particularly interesting was their obsession with the number sixty. They considered the number sixty a sacred number of the gods. This explains why they went for a sixty-second minute and a sixty-minute hour- a concept that we, modern humans, still use.

Mesopotamia was the first in many things

Historians believe that the first people to domesticate animals was Mesopotamia. They also revolutionized agriculture by building canals that supplied fresh water from the rivers Euphrates and Tigris.

Some of their artisans build tools that would be used for centuries to come. They also made advances in military weapons and warfare. The chariot, which was later used by the Ancient Egyptians and the Romans, owe its origin to the Mesopotamian. Other inventions and advancements were in areas such as mathematics, chemistry, pottery, and astronomy.

Settlements in Mesopotamia date back millennia of years ago

It is estimated that as far back as 10,000 BCE, the first organized group of people started to emerge along the two rivers of Tigris and Euphrates. The reason why people chose that area was because of the fertile lands. Bear in mind, the outer regions of Mesopotamia can be a bit dry and arid. With the passage of time, tribes of hunter-gatherers began to make their way to the banks of those two rivers. Over there, agriculture flourished and they even had enough area for their animals to graze. The resultant effect of this is that people began to trade surplus farm produce; hence the birth of commerce within and among these early communities.

They were avid learners and curious about their environment

Thanks to the sustenance that the two rivers provided to cities in Mesopotamia, the inhabitants had ample time to explore their natural and metaphysical environment. In the various priestly schools and temples dotted across Mesopotamia, priests, and nobles of the society conducted investigations into things such as medicine, astrology, religion, and law.  Naturally, a great number of their findings had religious undertones.

Long before the ancient Greeks even showed up, the region had its fair share of people who dabbled in philosophy. One such intellectual was Thales of Miletus (c. 585 BCE). Historians regard him as one of the first philosophers of the ancient world.

The region was not always so peaceful

Ancient Mesopotamia was a vast region with several tribes and cities. These people did not always leave in peace and harmony due to slight differences in cultures and beliefs. Control of areas moved from one city-state to another or from one empire to another. Typical of the ancient world, there were also several unrest within cities. More often than not conquered cities found it difficult submitting to the conquering ruler.

The Mesopotamian civilization required thousands of years to occur

Another very interesting fact about ancient Mesopotamia is that the region did not instantly start out as farmers. The earliest settlers (the Pre-Neolithic Age settlers) that settled there around 7,000 to 10,000 BCE used crude tools to hunt and gather. As thousands of years rolled by, they gradually began to move into farming along the Euphrates River and Tigris River. It was only then that the wheel of their civilization got accelerated. Then, more and more settlers came to the fertile lands on the rivers’ banks. From then onward, towns, cities, and empires flourished.

Mesopotamia had the greatest influence on ancient Egypt and Greece

Relatively newer Mesopotamian empires such as the Assyrians and the Persians engaged in trading with cities in ancient Egypt and Greece. It was through this commercial activity that the Egyptians and Greeks picked up or borrowed cultural and philosophical concepts from Mesopotamia. From around the New Kingdom to the Late Kingdom in Egypt, the Assyrian Empire had intermittent control over large areas in ancient Egypt. As for the Persians, they had full control over ancient Egypt during the 6th and 7th centuries BCE. It was through these economic, political and military interaction (or battles) that Mesopotamia was able to spread their culture to the rest of the world.

Mesopotamia’s legacy and influence lasted even long after the Egyptians and Greeks had gotten weak. Rome benefited as well.

Biblical historians believe that the majority of the contents in the Hebrew Scriptures of the Old Testament stemmed from Mesopotamia. Examples such as the “giants” that once ruled the world and Noah’s flood story came from Mesopotamia. According to ancient.eu., Mesopotamia tablet inscriptions and accounts of the Garden of Eden and Job’s story predates the ones in the Bible. Similarly, the famous Epic of Gilgamesh, as well as The Myth of Adapa, is just one of numerous delectable stories to have come out of ancient Mesopotamia.