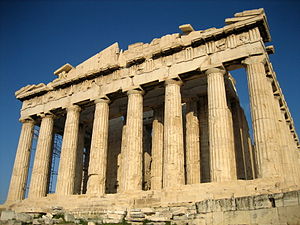 For centuries, ancient Greece chalked up several developments in not just social and political philosophy but in science and technology. The Greeks maintained an open-minded approach to investigating the world around them. As a result of this, their civilization introduced to the world a host of scientific ideas in disciplines such as physics, philosophy, mathematics, chemistry, medicine, architecture, biology, zoology and astronomy.

And even after about two thousands years, those ideas continue to shape our modern world. In order to demonstrate their invaluable contribution to the course of mankind, worldhistoryedu.com have put together twelve ancient Greek inventions that are still used today.

Greek inventions in Mathematics- Pythagoras and Thale’s Theorem, and the value of Pi

There were pretty much buff mathematicians in ancient Greece who devoted a reasonable chunk of their lives inventing complex mathematical theories. They primarily did mathematics because of the captivating appeal of numbers. Famous Greek philosophers and mathematicians such as Aristotle and Plato deployed mathematics to make sense of the world around them. However, not even they could compete with the minds of Thales, Pythagoras, Archimedes or even Euclid.

Historians believe that the first Greek mathematician was Thales of Miletus. This genius of a man developed some really pioneering theories and proofs in geometry. He is credited with introducing the Thale’s Theorem to govern a host of geometry problems in circles, angles, and lines.

Also to come from ancient Greece was the brilliant mind of Pythagoras. This mathematician and philosopher devoted all his life working on theories that explained how the world works. Most famous of his mathematical invention was the Pythagorean Theorem. To this day, the theorem continues to help us calculate the length of the sides of right-angled triangles (a2 + b2 = c2).

Interestingly, the world’s first known and most popular female mathematician came from ancient Greece. Her name was Hypatia (c. 355- 415 CE), and she was the principal of a Greek mathematics institute (the Neoplatonist School of Philosophy) in Alexandria, Egypt.

Finally, there was Euclid himself- arguably the greatest mathematician to come from ancient Greece. It is commonly held that Euclid was such a prolific mathematician that he penned down several books. He famously wrote the geometry book, titled Elements. This book remained the go-to-book for mathematicians for about two millennia. Some historians even go as far as saying that Euclid’s Elements is history’s most critically acclaimed book.

Innovative ideas and inventions in Astronomy- the Astrolabe

An astrolabe was a slightly complex mechanic gadget that the Greeks used to take measurements of celestial bodies in the sky. Historians believe that the astrolabe was the brain child of Apollonius of Perga (famously known as the “Great Geometer”). With this instrument, ancient Greeks were able to theorize that the Sun was not the object that did the orbiting around the Earth but rather, it was the Earth that orbited the Sun. This theory was proposed by Aristarchus of Samos in the 3rd century BCE. Absolutely brilliant come to think of it. It is simply mind boggling that a 2000 BCE civilization could came up with such progressive theories and instruments.

In about 470 BCE, Parmenides spectacularly worked out that the Earth was round. He deduced this by simply observing an eclipse of the Moon. He opined that if the Earth’s shadow was curved then it means that the Earth had to have a round shape.

Furthermore, many people today consider the astrolabe as one of the greatest inventions of the ancient world. Aside from it being used to calculate the altitudes of celestial bodies, the Greeks, as well as subsequent civilizations, deployed it on the sea. It was not uncommon for sailors or mariners (particularly in the Middle Ages) to use the astrolabe to aid them on their voyage.

Ancient Greece was the birth place of the first analogical computer 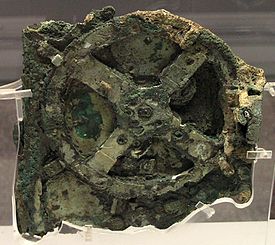 The Antikythera mechanism is proudly displayed at the National museum of Archaeology in Athens.

It is unthinkable that the first ever analogy computer would be made as far back as 2000 years ago. Far from it being called a computer, the Antikythera mechanism was a device that archaeologists believe helped the Greeks mark the position of celestial bodies such as the sun, moon and other planets. It was mainly used to predict the occurrence of solar and lunar eclipse as well as other important festivals’ dates. Most famous of such festival had to be the Olympic events that occurred every four years in ancient Greece.

At first, most historians believed that the Antikythera dated back to 125 BCE. However, recent findings show that Antikythera mechanism was invented in 205 BCE. Aside from being the first-known computerish thing made, the instrument is considered the first-known machine ever built.

The famed archaeologist Valerios Stais was the man responsible for discovering the Antikythera mechanism. Stais discovered it in 1902 in a pile of shipwrecked items close to the island Antikythera in Greece, hence its name “Antikythera”.

Standing at about 7 to 8 inches across, the Antikythera, with its bronze gears and display dials, is proudly displayed at the National museum of Archaeology in Athens, Greece.

The ancient Greeks had showers and laid out plumbing systems

They had reasonably good plumbing systems that were made of lead pipes. Places like ancient Crete had underground clay pipes that provided flowing water as well as other sanitation needs. We know of this because of an Athenian vase had a picture of a female shower cabin. It is therefore likely that the various gymnasiums and sports clubs (particularly at Pergamum) in ancient Greece had public bathrooms flowing with water.

Theater was invented in ancient Greece

If you were to go back about 2500 years ago to ancient Greece,  you would discover that entertainment and other theater arts of the modern age bears a slight resemblance to the ones in Greece. Ancient Greeks were the first to perform in theaters. They had amazing actors and stage performers that wrote brilliant plays in genres like comedy and tragedy. Aristophanes (c. 446 – c. 386 BCE) for example was comic genius and writer of several plays such as the Birds and the Lysistrata in ancient Greece.

Aeschylus, Sophocles and Euripides were extremely famous back then for their plays in the tragedy genre. It is worth mentioning that, Sophocles was the one who wrote the famous Oedipus Rex.

Music, arts and culture really flourished in ancient Greece. The word “music” even comes from the Greek word “muses”. The muses were 9 lower goddesses of arts considered to imbue in ancient Greeks inspirational ideas and art works.

Archimedes’ screw was invented by the phenomenal ancient Greek scientist called Archimedes (commonly referred to as “the wise one”). The machine was designed to lift water swiftly using a rotating screw-shaped metal (a helix) inside a cylinder. In Archimedes’ days, the screw served several historical purposes. Some Greeks used the equipment to drain water from large ship’s hold. Flooded mines and land could also be drained using the screw.

Archimedes screw is usually titled at an angle of about 45 degrees to the plain in order to allow water to be  scooped up and pushed up the tube by the rotating helicoid. Also, the equipment could be used to irrigate farms using water from low-lying areas. The exact date of its invention is not yet known, but some historians place it between 287 BCE and 212 BCE.

Today the Archimedes screw, also known as a screw pump, is used in electrical plants and mines. Engineers deploy it when draining a land for reclamation purposes. This was particularly useful in places like the Netherlands that have very low lying coasts. And quite typically, the screw has been used to pump wastewater in sewage plants. In some cases, when the Archimedes Screw was reversed, it produced energy. The Archimedes screw has ready applications in elevators, windmills and combine harvesters.

The video clip below  explains how the Archimedes’ Screw works:

Ancient Greece was the first to have a lighthouse

Advances and ideas in medicine

Prior to the coming of ancient Greek physician, Hippocrates of Cos, the ancient world believed that diseases and illnesses were the creation of the gods. Hippocrates of Cos was the first person to prove them wrong. He conducted several experiments and showed the ancient Greeks how the human body sometimes reacted adversely to the environment. He educated people about how maladies of the body can be cured using natural ways.

Hippocrates’ work in human biology and medicine earned him the title: “father of Western medicine”.  His school, the Hippocratic School of Medicine, was very popular in his time (460 BCE). It is believed that ancient Greek doctors could even differentiate between veins and arteries as far back as 500 BCE.

Today, doctors, nurses and other medical professionals take the Hippocratic Oath (the ethical oath) before they start practicing.

The birthplace of democracy and the Olympics

The first people to govern using democracy were ancient Greeks. It is believed that they had democratic structures for about 185 long years. The ideas and concept of a constitution and democratic systems sprung up around the 508 BCE in ancient Athens.

Two hundred years prior to the birth of democracy, the Greeks had a very famous sports festival – the Olympics. Started in 776 BCE, the Olympics was a quadrennial event organized in the Greek city of Olympia. They were primarily done in honor of the Zeus, the god king of the pantheon. During those few days that the games were organized, warring city-states halted all forms of aggression against each other. The last Olympic games were organized in  393 C.E. The would take another 1500 for the Olympic games to get a reboot in 1896.

Over the years water mill technology has been used in metal works, agriculture and milling in itself. Primarily, it has been used grind grains and convert them into flour or other edible materials.

The origin of the water mill technology can be found in ancient Greece. The water mill invention was based on a wheel called the Perachora wheel. The Perachora was invented by Philo of Byzantium, a Greek engineer.

The Odometer- an ancient Greek invention for measuring distances

An odometer today is considered as an electronic device that measures the distance traveled by a moving automobile or bicycle. The principle that this technology was based on dates back to 27 BCE in ancient Greece. It is unclear who exactly came up with it. Some historians believe that it was either Archimedes of Syracuse or Heron of Alexandria that invented the idea.

Across the western world, building designs have been influenced by Greek architecture. Tall columns, symmetrical shapes, domed roofs and triangular pediments are just some of the thing that have shaped building designs and construction for thousands of years.

The Lincoln Memorial , located in Washington D.C., design bears strong resemblance to the Acropolis from ancient Greece. More often than not, the Greeks introduced levers, cranes and levers to facilitate the lifting of heavy building materials.

Greek mathematician and engineer, Archimedes, talking about the power of levers

In addition to the above monumental inventions, ancient Greece has been credited with inventing the first alarm clock, the catapult, cranes and levers (Aristotle’s pulley hoists systems), and the water clock. These inventions, as well as many more other, are the reason why ancient Greeks had “father” titles in disciplines such as medicine, law, science and zoology.