Mildred Lisette Norman was an American pacifist and peace activist. She was also known as the first woman who walked through the Appalachian Trail in one year. She frequented churches, schools, and local and national radio and television, preaching peace. 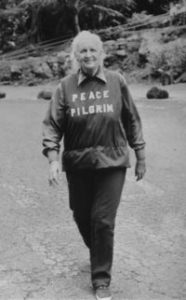 Activism and Other Notable Achievements

Peace pilgrim started out her career after encountering a “spiritual awakening” after a long time of meditation. She explains the experience in her book “Her Life and Work in her Own Words”, which she published in 1983.

A copy of an interview with Peace Pilgrim in 1964 on the Los Angeles radio KPFK was printed as “Steps Towards Inner Peace”.

Her pilgrimage traversed for nearly three decades, starting from January 1, 1953 in Pasadena, California. During that time, the Korean War was raging and she continued to walk for 28 years, beyond America’s engagement in the Vietnam War which was between 1955 and 1975. She had vowed to stay a peace traveler until all people had learnt the way of peace. She identified herself as “Peace Pilgrim” communicating peace and traversed more than 25,000 miles across America.

Friends of Peace Pilgrim, a non-profit organization, was established to provide free and accessible information about Peace Pilgrim.

The book “Steps Toward Inner Peace” is available in many languages and the booklet covers over 20 languages.

A Peace Pilgrim Park was established in her hometown of Egg Harbor City, New Jersey in her honor.

Other Interesting Facts about Peace Pilgrim

She was born to Josephine Marie Ranch and Ernest Norman.

She died on her seventh cross-country journey in a car accident on July 7, 1981. The peace activist was on her way to a speaking event near Knox, Indiana.