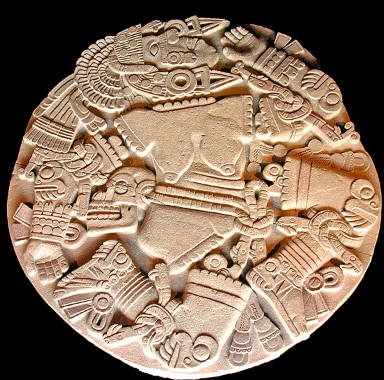 Considered one of the most famous Aztec monuments, the Coyolxauhqui stone was found at the base of the pyramidal stairway leading to the Templo Mayor, a major temple of the gods Huitzilopochtli and Tlaloc.

On February 21, 1978, a group of workers with the Mexico City electric-power company stumbled upon the Coyolxāuhqui stone. Subsequent excavations would later reveal that their stone was purposely placed at the base of the Templo Mayor. The stone contains relief works of the battle between Huitzilopochtli and Coyolxāuhqui. There are paintings of two serpent heads on both sides of the stairways.

The Coyolxāuhqui stone shows Huitzilopochtli’s sister Coyolxāuhqui  dismembered. Her head, arms and legs are severed from her body as head faces upwards and away from the rest of her body.

Enemies of the Aztecs, i.e. captives and prisoners, were sacrificed to the god Huitzilopochtli. The sacrificial victims walked past the stone before meeting their end at the front of Huitzilopochtli’s shrine atop the Templo Mayor. The Aztecs tried to reenact the manner in which the goddess Coyolxāuhqui  was killed by Huitzilopochtli.

During the sacrifice, the hearts of the sacrificial victims were cut out from their bodies and then thrown down the temple stairs to Coyolxauhqui stone. A perfect reenactment of how Coyolxauhqui was decapitated and dismembered.

In Ramírez Codex – a late 16th century book about the local inhabitants of New Spain – Huitzilopochtli ordered the Tenochtitlan people to make settlement when they see an eagle killing a snake on a prickly pear cactus (Opuntia).

The eagle was one of the most important symbols of the Mexicas. And such was the importance of Huitzilopochtli that the Mexicas sometimes referred to themselves as the “People of the Sun”.

The eagle is said to represent Huitzilopochtli. The cactus — which is called nōchtli in Nahuatl – represents the island of Tenochtitlan.

Due to an an incorrect translation of  the Crónica Mexicáyotl by Fernando Alvarado Tezozómoc, the snake came to be associated with evil and chaos. However, in the original meaning, the snake represents wisdom, which in turn is related to the Aztec god Quetzalcoatl.

The first missionaries that arrived in the Americas erroneously ignored the pre-Columbian traditions and meaning and interpreted the eagle as a representation of everything that is good, while the snake represents sin and evil. 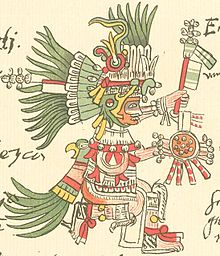 How the city of Tenochtitlan came to being

Before the Aztecs made Tenochtitlan their home, they lived at a place called Aztlan, where they were ruled by a tyrannical class called Azteca Chicomoztoca. The god Huitzilopochtli intervened and ordered them to liberate themselves by leaving Aztlan, promising to keep them safe throughout the journey. According to the myth, Huitzilopochtli instructed them to call themselves Méxica and never use the name Aztec.

When Malinalxochitl woke up, she was devastated and later swore revenge. She went on to give birth to a son called Copil, who in turn tried to exact revenge on behalf of his mother by fighting against Huitzilopochtli. The Aztecs believed that Huitzilopochtli killed Copil by ripping his heart out. Huitzilopochtli then threw Copil’s heart into the middle of Lake Texcoco.

A few years into their journey, Huitzilopochtli ordered the Aztecs to find Copil’s heart and build their city over it. He also instructed them to set up their new home the moment they see an eagle perched on a cactus, devouring a serpent. That new home of the Aztecs came to be called Tenochtitlan, which is located in the Valley of Mexico (in modern-day Mexico City, Mexico).

The Aztecs believed that the spirits of fallen warriors in battle and women who died in childbirth served at the palace of Huitzilopochtli in the south. In order to make their way to Huitzilopochtli’s palace, the spirits turned into hummingbirds.

Huitzilopochtli’s most preferred weapons were the shield (teueuelli) and darts and dart thrower (xinatlati). It was believed that he held in his hand a powerful weapon known as Xiuhcoatl, a fire serpent (spirit of the Aztec fire deity Xiuhtecuhtli).

Huitzilopochtli emitted so much bright light that the spirits of fallen warriors in battle used their shield to protect themselves. Only the bravest of the brave could look at Huitzilopochtli.

Following his birth, he and his brother Quetzalcoatl (also known as the god of the wind, knowledge and wisdom) were tasked to vanquish the chaos and bring order to the cosmos. He and his brother then set out to create fire, the Earth, the first humans, and the Sun.

The Templo Major, also known the Huēyi Teōcalli, symbolized the Serpent Mountain (Coatepec) on which Huitzilopochtli defeated his sister Coyolxāuhqui and his four hundred brothers. Shown on the Coyolxāuhqui stone is goddess Coyolxāuhqui laying on her back with her bodies parts severed.